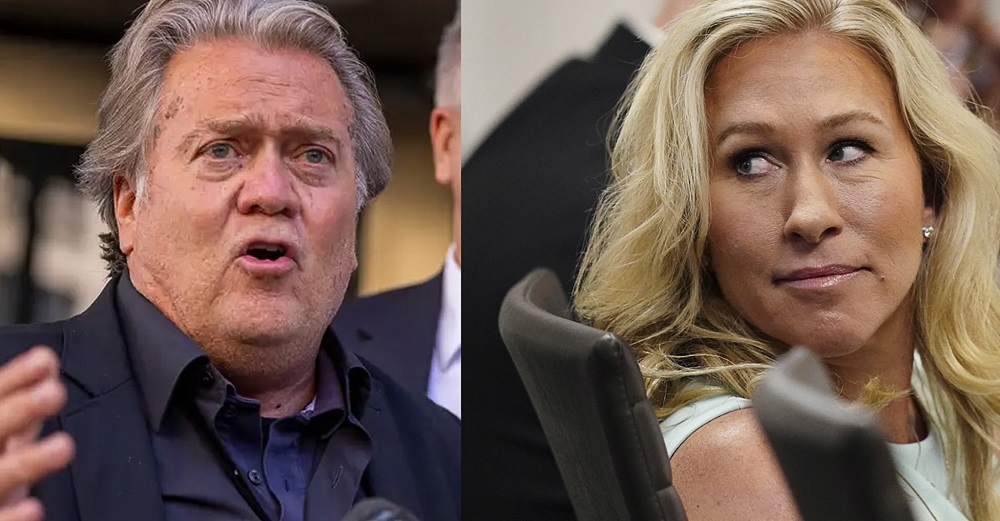 Steve Bannon, the host of the popular War Room program, made an exciting announcement Sunday night that makes plain the direction he has to set Washington DC on its ear after the November mid-term elections.

It is expected that Republicans will re-take the US House of Representatives in a historic upset of the radical Democrats’ plans to reshape the United States of America. Bannon wants to see some action after that.  His action plan is called the America First agenda.

Bannon’s personal endorsement of Greene as a strong advocate for the American First agenda will command interest from many people around the country, and Democrats are highly concerned about the power of Bannon backing Greene.

The media took note right away.

According to her bio: “Marjorie Taylor Greene, also known by her initials MTG, is an American politician and businesswoman who has served as the U.S. representative for Georgia’s 14th congressional district since 2021.”

Greene, a Republican from Georgia who, like a  few others of the new 2020 GOP warriors who were elected to DC after President Donald J. Trump made a stand for the USA, started her political career out as an activist.

Greene has served one term in the US House. However, her impact has been lasting already.

MTG is one of the most historically popular House Reps,  seen blazing a unique rebellion to the left, just as one of her first acts in office was to defy US Speaker Nancy Pelosi (D-CA) over the usage of facemasks on the floor of the US Capitol.

The idea of MTG taking Pelosi’s place is too delicious for MAGA to ignore.

To the MAGA movement, Greene is seen as a champion to the people for her tireless advocacy to return DC back to the people.

In fact, MTG is one of the Democrat-RINO’s most sought-after targets.  The lapdog media are vicious to her.

Footage of Jm Acosta stalking Greene outside of the US Capitol and being aggressive and hostile with her over her support of Trump has gone viral several times over.

Bannon and Greene are a powerful duo to dismantle the left’s plans for domination.

Bannon on the War Room talks about dismantling what he has coined ‘the administrative state,’ meaning the massive bureaucracy that DC has become- basically explaining that the Federal Government employs too many people and has too much power over the ‘little guys,’ however, that is not all the America First movement wants to see change about DC.

Bannon, his supporters, and other lawmakers who defend the ‘reconstruction’ message have been outspoken about a plan to directly assert their government power of oversight committees- on the usurpation of the left- should they recover the power to do so.

All the movement needs are for the American people to do their duty and vote, and that is something that is absolutely spine-tingling for the totally out-of-control government- which wants to keep all that power for itself.

Bannon laid out his case for Greene to be the leader of the House, giving her significant impact upon those types of oversight committees- if the plan all came together.

Check out what Bannon said in his endorsement:

“We have a unique opportunity to destroy the Democratic party as a national political institution. From school boards, that County commissions, State legislatures, House, and Senate. But we have to deliver. And once we win the House, do we have a better speaker? The House and MTG?” Bannon said on Sunday to a crowd of enthusiastic supporters.

“We are going to need her speaker of the house to take it to the Democrats,” Bannon added.

Steve Bannon is trying to get Marjorie Taylor Greene to run for Speaker of the House. pic.twitter.com/eItWIPERg4

“The Missouri conference laid out and examined the key activities that took place before and after the November 2020 election that resulted in the stolen 2020 presidential election.

“A highlight of the weekend was the release of the much-anticipated movie [S]election.code that follows the story of Tina Peters, the County Clerk in Mesa Colorado, who made a backup of her counties Dominion Voting System server, only to stumble across evidence of manipulation in a recent local city council election…. and also the 2020 general election.

On Sunday morning, surprise guest and MAGA-Star Rep. Marjorie Taylor Greene took the stage where she lambasted Democrats and their policies that are destroying America today.

The MyPillow CEO made several appearances on stage during the weekend. The Lindell team focused on the unexplainable and impossible computer-generated totals that put Joe Biden if office.

During the close of the conference, Mike Lindell invited Steve Bannon on stage with Marjorie Taylor Greene.

Steve Bannon endorsed Marjorie Taylor Greene as the next Speaker of the House of Representatives.

The MAGA crowd cheered in agreement.”

Green has posted on Twitter recently about some of her ideas about the work of the US that is especially noteworthy after Bannon threw his full support behind her:

During the first 2 yrs under Pres Trump, the Republican controlled House and Senate did not accomplish important campaign promises like repeal Obamacare, defund Planned Parenthood, defund Sanctuary Cities, and did not fund or build the border wall.

Then while campaigning in the 2018 midterms, many GOP strategists & Republican members of Congress up for re-election..

Apparently the Republican Party has not learned the most important lessons they need to understand in order to win and properly use power to save this great country.

Trump is the most popular Republican president in US history winning the most votes of any Republican.

fight for this country and our people and stop running away from the very man that actually did what Americans wanted then we will win and save America.

Lukewarm politics just makes people want to spit you out.