See It: Justice Department Releases Response To Donald Trump’s Petition | Eastern North Carolina Now | The Department of Justice filed its response opposing the appointment of a special master to review documents seized by the FBI at the Mar-a-Lago home of former President Donald Trump.

Published: Sunday, September 4th, 2022 @ 1:04 pm
By: Daily Wire   ( More Entries )
Publisher's Note: This post appears here courtesy of the The Daily Wire. The author of this post is Dillon Burroughs.

Publisher's Note: This series of posts on this one issue - The Unprecedented FBI Raid of President Trump's Mar-a-Lago Estate - can all be found here on ENC NOW. 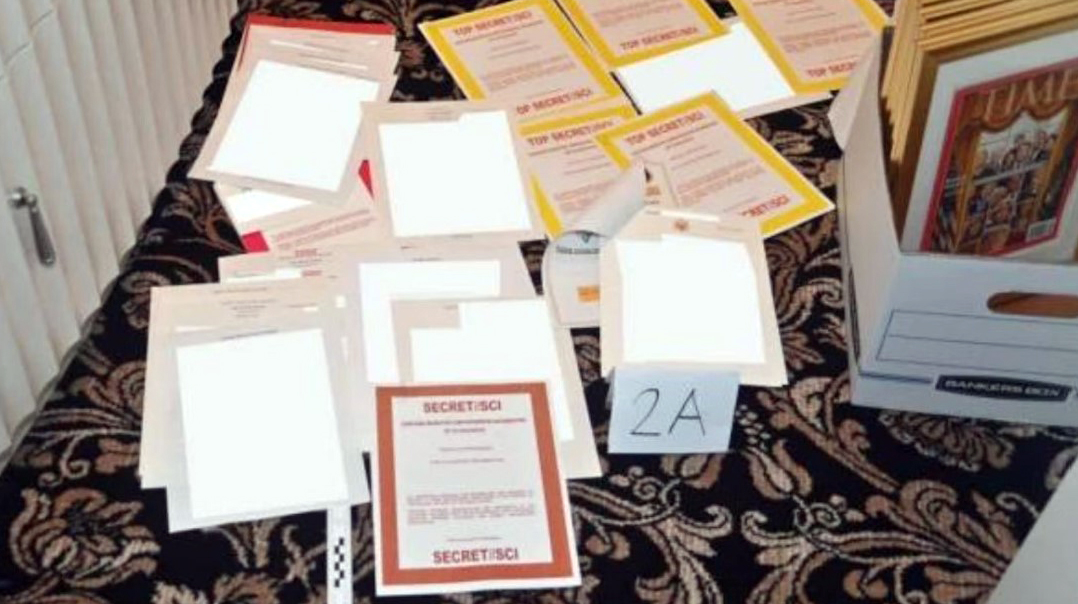 
The Department of Justice filed its response opposing the appointment of a special master to review documents seized by the FBI at the Mar-a-Lago home of former President Donald Trump.

Included in the response was a picture featuring classified documents on the floor of the former president's Florida estate.

"Counsel for the former President offered no explanation as to why boxes of government records, including 38 documents with classification markings, remained at the Premises nearly five months after the production of the Fifteen Boxes and nearly one-and-a-half years after the end of the Administration," the filing stated.

The filing also argued that the appointment of a special master would slow the ongoing investigation.

"Furthermore, appointment of a special master would impede the government's ongoing criminal investigation and-if the special master were tasked with reviewing classified documents-would impede the Intelligence Community from conducting its ongoing review of the national security risk that improper storage of these highly sensitive materials may have caused and from identifying measures to rectify or mitigate any damage that improper storage caused," the filing added.

The response also claimed that any materials subject to attorney-client privilege were already separated from the Justice Department's evidence.

The filing stated, "this case does not involve any of the types of circumstances that have warranted appointment of a special master to review materials potentially subject to attorney-client privilege."

The former president had also argued the materials were covered by executive privilege, a move the Justice Department's response rejected, saying Trump "cites no case" in which the privilege has been successfully used to block the sharing of documents within the Executive Branch.

Trump filed suit against the federal government over the FBI raid on August 22. The former president's legal team argued in the lawsuit that the raid in Mar-a-Lago appeared to be motivated by politics rather than law.

"[T]he Government has failed to legitimize its historic decision," the suit says, adding that Attorney General Merrick Garland took the "unheard-of step" of holding a press conference over the raid and agreeing to release part of the search warrant application.

The lawsuit called for an independent review of the seized documents, a request the Justice Department has rejected.

Trump has also blasted the approval of a search warrant on his Florida residence, arguing the full document should be released. The request was also denied, with only a highly redacted version made public.

U.S. Magistrate Judge Bruce Reinhart released the heavily redacted version of the search warrant affidavit on Friday. Of the 32-page affidavit, 11 pages are almost entirely redacted, with more redactions throughout the document.

In a companion document, the DOJ explained the need for its proposed redactions to the court. The explanations were also heavily redacted.

The Daily Wire previously reported that Trump has brought on former Florida solicitor general Chris Kise, an experienced attorney and shrewd political operator, to advise the former president regarding the FBI's August 8 raid.