Just Regular Kids | Beaufort County Now | Spend any time with the participants of two annual camps run by East Carolina University's Brody School of Medicine and your first question may be, "Where are all the sick kids?"

Camps provide young Brody patients a week to 'be free'

Spend any time with the participants of two annual camps run by East Carolina University's Brody School of Medicine and your first question may be, "Where are all the sick kids?"

The answer is that they're everywhere. They're swimming, kayaking, hula-hooping and running, shooting arrows, walking on balance beams and learning to sail, performing skits, making new friends and maybe eating a minnow or two. And that's exactly what the organizers of Camp Hope and Camp Rainbow want to happen.

For one week each summer, the doctors, nurses, social workers and staff from Brody's pediatric hematology/oncology unit take over Camp Don Lee on the Neuse River near Arapahoe. There, the Brody health professionals get to know their young patients in an environment far removed from a clinic or hospital, where conversations about chronic illnesses can take place in a candid, informal way and patients' personalities shine.

All Camp Hope participants have sickle cell disease. Camp Rainbow is open to children with cancer, hemophilia or other chronic blood diseases. 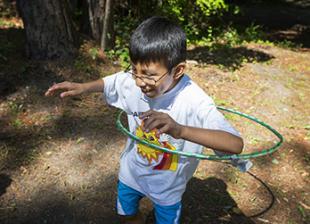 Camper Marvin Espiritu-Gustavo demonstrates his hula hoop skills.
"It's a good opportunity to do something fun, get away from their parents and have some independence - something often taken away from kids with chronic illnesses," said program director Jacquelyn Sauls. The availability of on-site, expert medical care means parents can sign their kids up with few worries, Sauls said, though sometimes it takes a little convincing.

Fourteen-year-old Jalen Bryant of Cove City came to camp for one day in 2012 to check things out. He returned for the full week this year with no reservations, despite being the only camper in a wheelchair. Jalen has osteosarcoma, or bone cancer, but that doesn't stop him from sailing or kayaking with a little assist from a life jacket.

"I just like being outside and around water," he said, bobbing in the swimming pond with a firm hold on the wooden deck. "It's like therapy. It's better than counseling.

"Everybody here is family," he added. "Nobody's judging you."

Sauls said that's one of the chief benefits to Camp Rainbow and Camp Hope participants. The campers see that they're not alone in their illness. There are other kids going through the same therapies and taking the same medicines.

"You're a person first," Sauls said. "You might have an illness but it's not what defines you."

It's a restorative time for the medical staff, too.

"We sometimes have to do things that are painful as part of their treatment," she said. "And here, you get to have fun with them. It recharges our batteries."

Fewer and fewer young Brody patients are getting this unique experience. Funding has waned for the camps since their inception. Camp Rainbow used to accept more then 100 children each year. That number has dwindled to 22 by 2013. Camp Hope served close to 90 at one time, but this year only accepted 27 youths. They combined the two camps five years ago to save money, Sauls said. 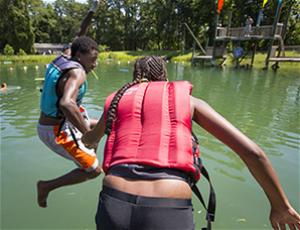 Two Rainbow/Hope campers take the plunge into the Camp Don Lee swimming pond.
The camp is free to families, but it costs approximately $825 to host each participant, Sauls said. This year, financial support came from Children's Miracle Network, the ECU Medical & Health Sciences Foundation, Dr. Linda Willis of Rocky Mount, the Snow Hill Moose Riders, the Greenville Women's League, Wells Fargo of Greenville and many other local civic organizations and individuals from throughout eastern North Carolina.

Others making the camps possible are the volunteers, who may be ECU students, alumni or even siblings of former campers. Craig Harper graduated from ECU in 2009 and also grew up with an older sister who had sickle cell. He first attended Camp Hope with her in 1993.

"Camp was and still is the one time of year I really look forward to," the 27-year-old said. "They spend so much time feeling different. I just want to make sure they feel like a regular kid."

Keeden Hopkins, another 2009 ECU graduate, is spending his sixth summer leading and mentoring a group of Camp Rainbow kids aged 6 to 10.

"Not even joking, I was prepared to quit my job to come to camp," he said. "The love these kids have...they're some of the strongest kids you'll ever meet. They're extremely resilient."

That's definitely the case with Vanessa Foreman, 13, of Chocowinity. After rubbing some sand on a jellyfish sting, she was back in the water an hour later, trying to get her kayak out over the breaking waves. She says she has to explain ITP - a rare blood disorder - to someone almost every day. But not at Camp Rainbow.

"It's really awesome," agrees Dana Sparks, who works in clinical patient access with pediatric hematology/oncology. Sparks doesn't lead boating or archery, but she is there for anyone needing "hugs and cuddles."

"A lot of times (when we see them), they're really sick," she added. "But that's not part of their thinking right now. Down here, you get to see them be free."

Program administrator Jacque Sauls can be reached at 252-744-4676 or saulsj@ecu.edu. 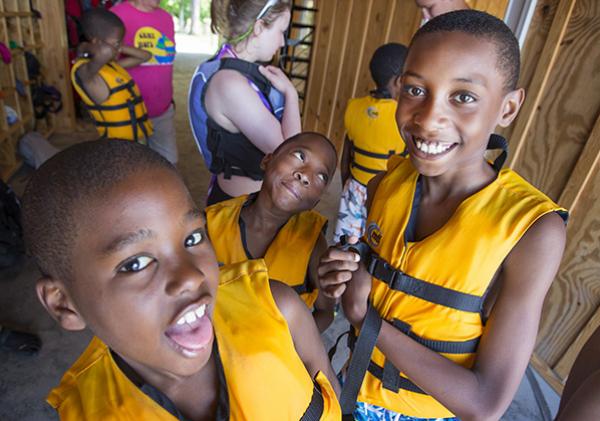 Campers Zyquavion Batchelor, Jeremiah Seaberry and Rykkeal Harrison, left to right, mug for the camera as they prepare to go sailing. 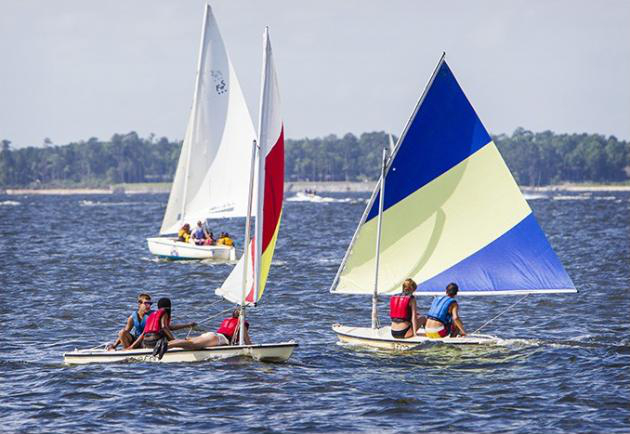 Campers learn to sail in the Neuse River at Camp Don Lee. Campers are introduced to many outdoor activities during their stay at Camp Hope/Camp Rainbow. (Photos by Jay Clark) 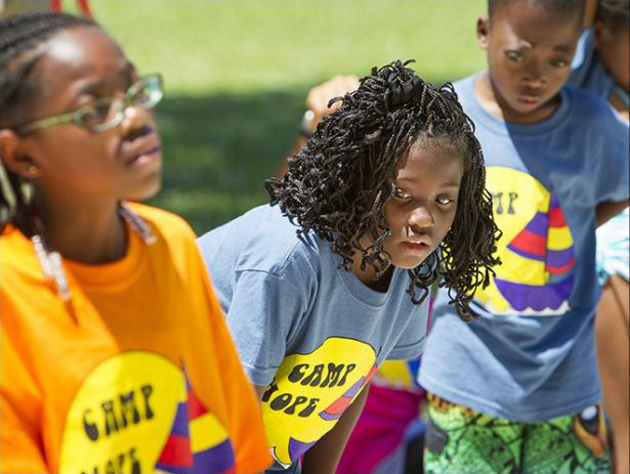 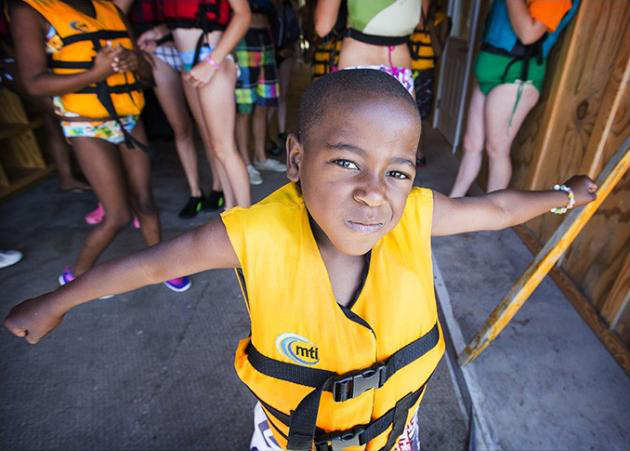 Nizerre Hunter, age 6, is ready for a sailing trip at Camp Hope/Camp Rainbow. 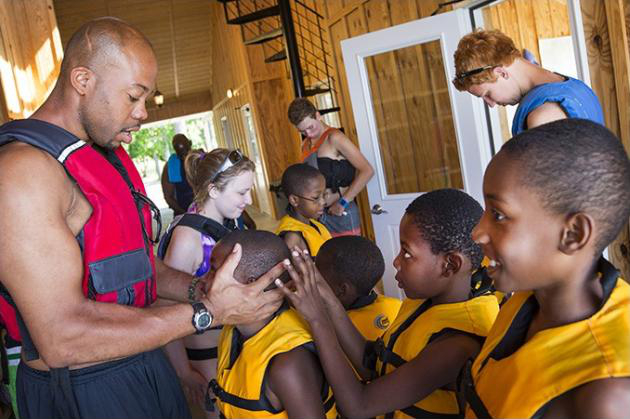 Camp Hope counselor Craig Harper, left, plays with campers as they get ready to go sailing. 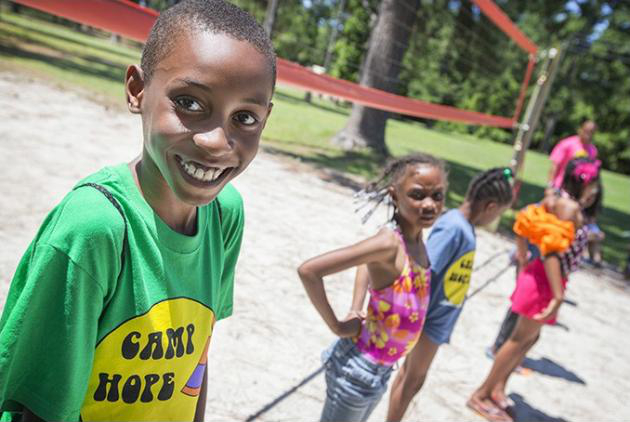 Rykkeal Harrison, left, plays a team-building game with other campers during their stay at Camp Hope. 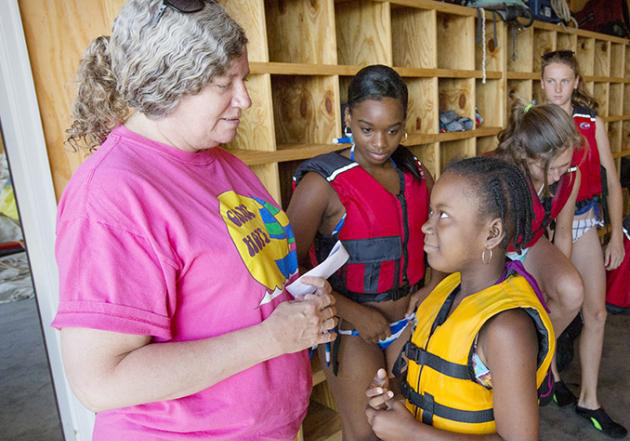 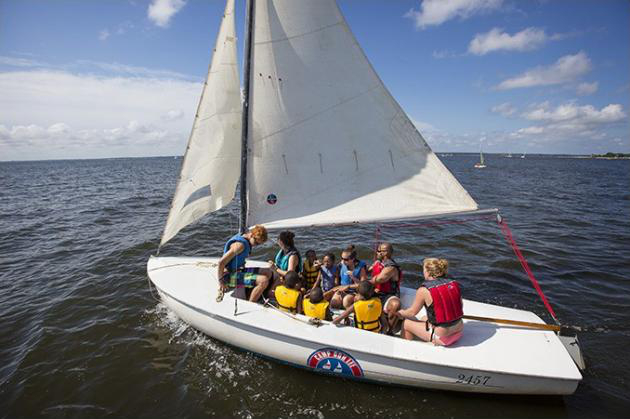 A group of campers heads out on the Neuse River. 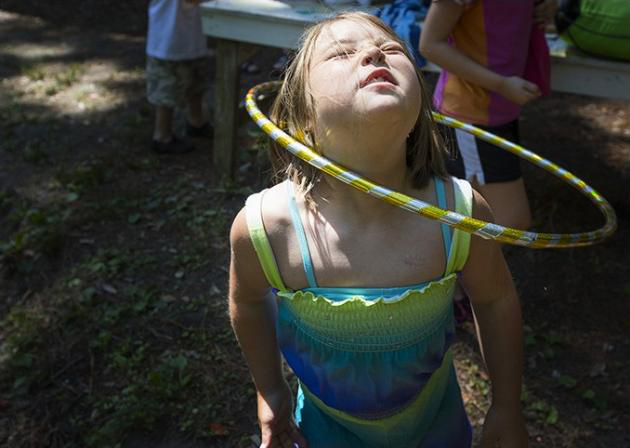 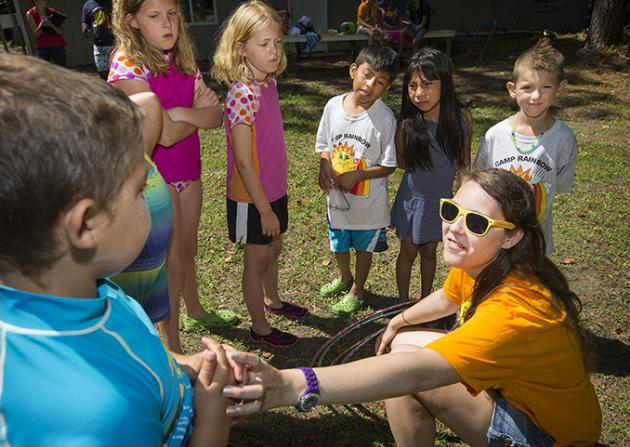 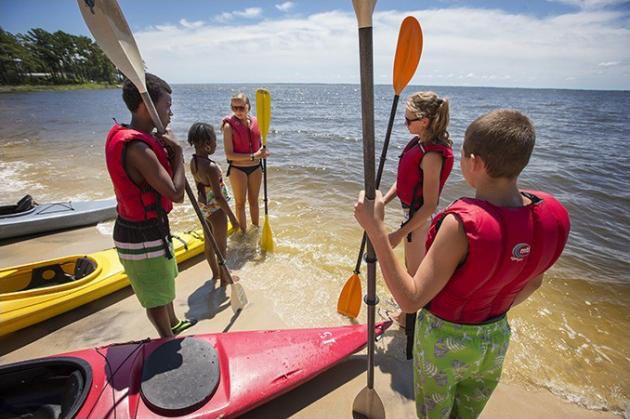 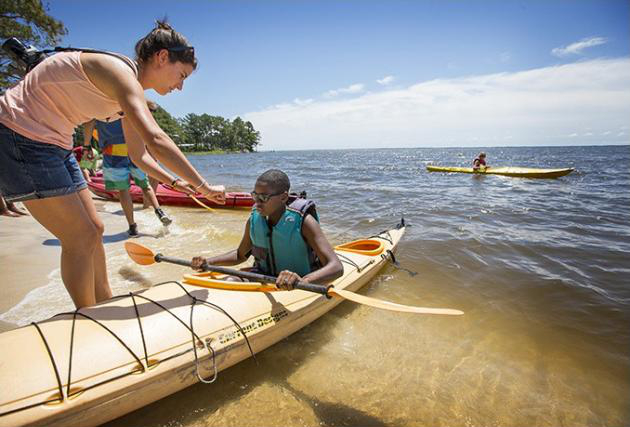 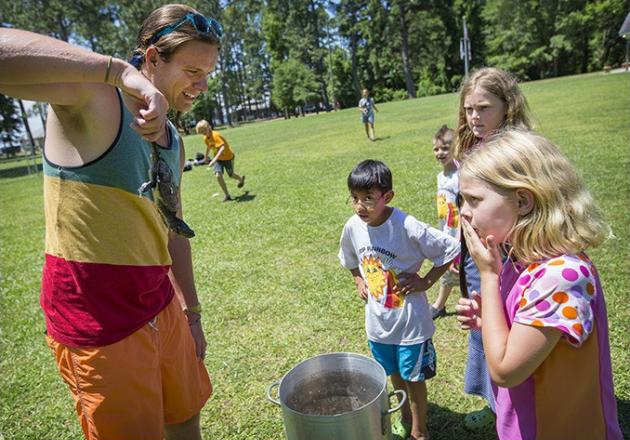 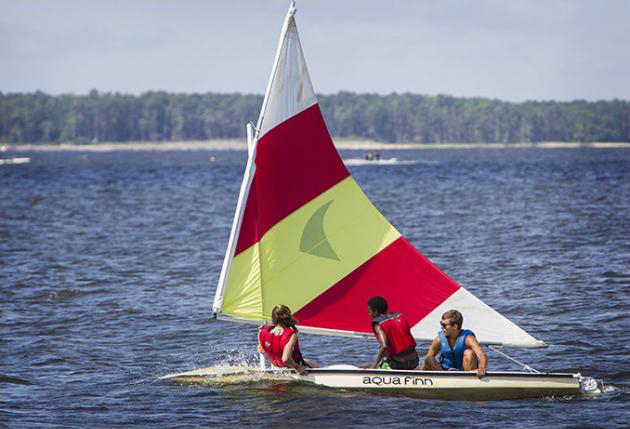 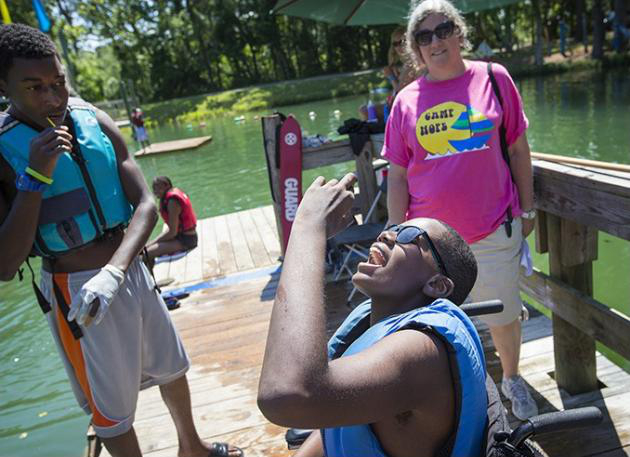 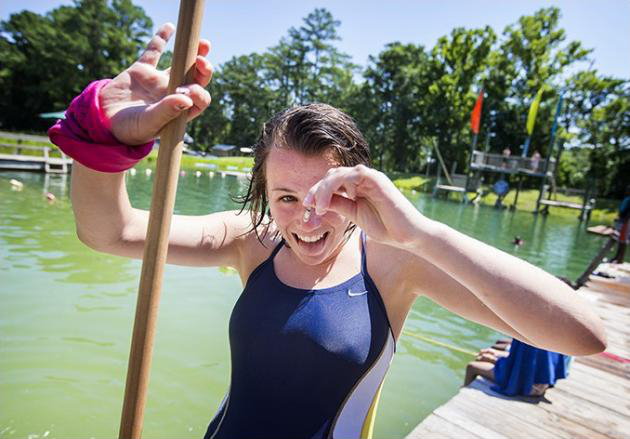 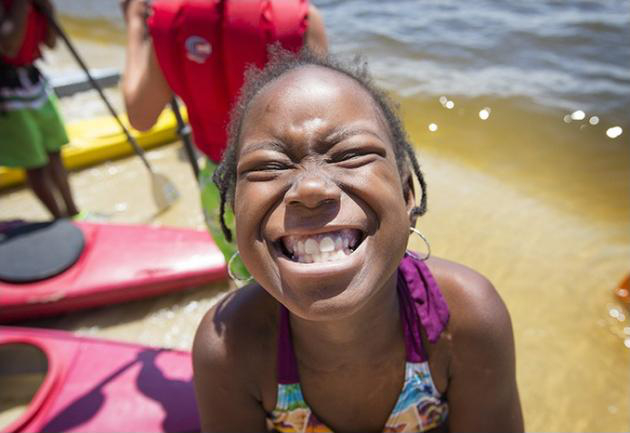 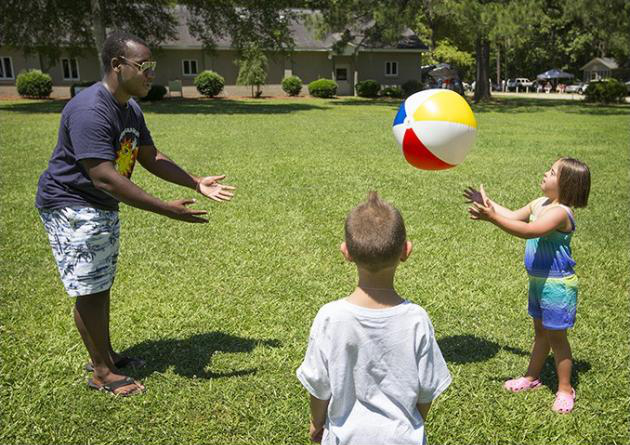 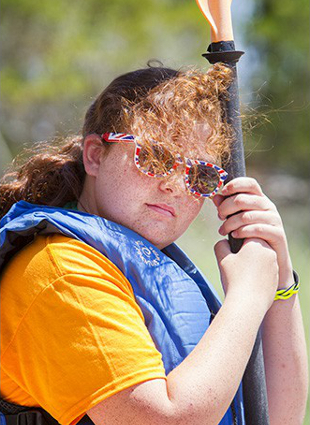 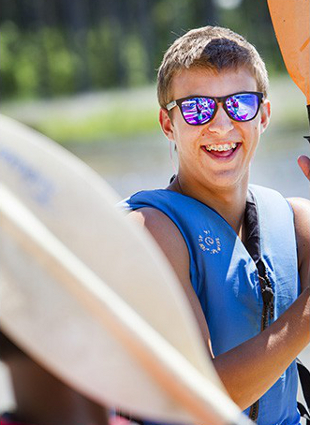 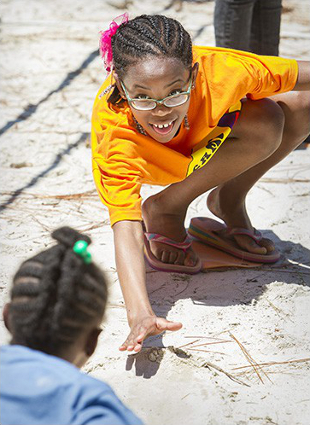