Bien Hoa Pick-Up 1965 | Beaufort County Now | As a Dustoff Pilot, I would fly out for pick-ups in the field. Each day I would see the conditions that the ground troops had to endure and I would draw comparisons to my own situation. | Dustoff Pilot, Dustoff Pilot, Vietnam, Vietnam War, 57th Medical Detachment, Bien Hoa

We are pleased to announce that you will be able to find Alex here at BCN or at his blogspot here.

As a Dustoff Pilot, I would fly out for pick-ups in the field. Each day I would see the conditions that the ground troops had to endure and I would draw comparisons to my own situation.

They would be dirty, often very wet, often very hot, many times could not see 10 yards into the jungle in front of and behind them and in danger of receiving fire at any moment. At the end of the day they were still in these horrid conditions and now they had to try to survive the night. 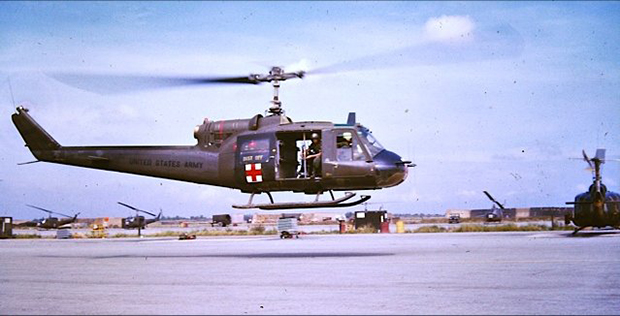 My situation was different. We were often in great danger but, at the end of our missions, we had a clean bed to sleep in, good food and security of some kind. I often thought that I would not trade my job for that of an infantry soldier for anything.

As Major Paul Bloomquist told me on my first day in Viet Nam, as we sat in a downtown restaurant, "This is the best war you will ever fight in. You get to fly around and get shot at and, if you survive, you get to go downtown at night and eat a steak."

One day we flew up to Bien Hoa to pick up patients and transport them back to Saigon. The patients were not ready when we arrived and we shut the ship down to wait.

I was sitting on a skid and talking to walking wounded from the aid station. Most showed some sign of the wounds they were recuperating from...bandages, crutches, limps, etc. These were the infantry soldiers for which I had often felt so sorry.

At one point, one of wounded stood towards the front of the ship and while looking at the Plexiglas but not looking at me said,

"I would not have your job for all the money in the world."

I guess we are all comfortable with what we know and are trained to do.