Two months ago, walking more than a few steps without resting was impossible for 4-year-old Daniel Ambikiire. A congenital heart defect prevented him from being an active boy and pursuing his desire to help his father tend the family's cattle at their home in Uganda.

Today, Daniel can run, play and help his father thanks to a life-saving surgery available through a partnership between the Brody School of Medicine at East Carolina University, Vidant Medical Center and Samaritan's Purse Children's Heart Project.

Daniel and 3-year-old Elijah Sebuliba traveled from Uganda in October to receive open-heart surgery made possible through Children's Heart Project - an international project that matches children who need heart surgery but lack access to it in their home countries with North American medical centers willing to donate their services. 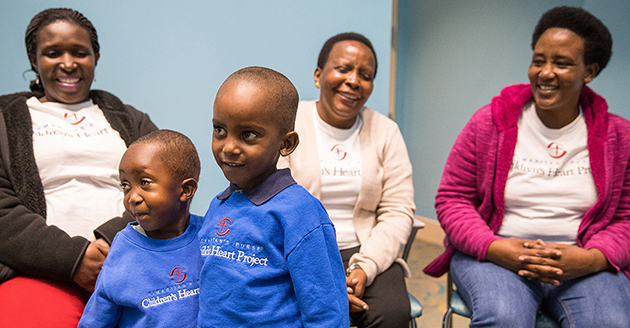 Elijah (left) and Daniel traveled from Uganda with family members to receive life-saving surgery made available through a partnership between the Brody School of Medicine at ECU, Vidant Medical Center and Children’s Heart Project. (Photos by Cliff Hollis)

Both children suffered from the same heart defect, Tetralogy of Fallot - a hole in their hearts with several additional complications. The condition caused low oxygen levels that made their skin appear blue and required them to rest after simple tasks like eating or walking across the room.

"Without surgery their lives would be very short, not very active," said Sang.

The journey to find help for the young boys and their families was long and uncertain. Daniel's story began with a 300-mile trip from his village in western Uganda to the country's main hospital that his family hoped could offer answers for his health problems. Elijah's mother began searching for answers when her son was unable to keep up with other children and had difficulty breathing at 18 months old. Both families eventually crossed paths with the Children's Heart Project, which arranged trips for both boys to the United States for the life-saving procedures. 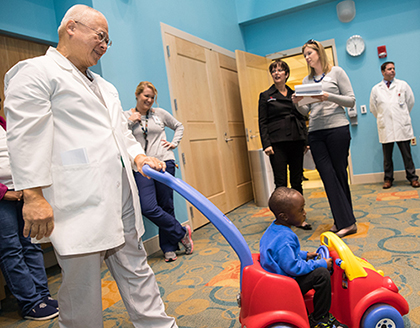 Pediatric cardiologist Dr. Charlie Sang pushes his patient, Elijah, in a toy car the day before he travels home to Uganda.
Daniel's aunt, Juliet Bishemere, traveled with him for the surgery and said the family had lost hope that he would live much longer. They had tried everything before the opportunity to come to the United States was presented.

Sang has worked with the Children's Heart Project for more than 11 years and each spring he receives a list of possible candidates for surgery to review. He said the boys stood out from the list because their oxygen levels were so low. A normal oxygen level is 98; theirs was in the 60s.

"We tend to pick harder cases because they need it the most," said Sang. "When Elijah and Daniel arrived, they were very blue from having such low oxygen levels. It was amazing they were living with such low levels."

Sang said children in the United States with the same type of heart defect would normally receive surgery between three and six months old. He said the boys would not have survived to adulthood without the surgery.

Their care in Greenville started with a dental exam to identify and correct any problems before surgery in an effort to prevent possible infections from moving to their heart. Then, their surgeries were performed on Oct. 26 and 27 and after spending time recovering, the boys returned to Uganda on Nov. 30

Sheena Basemera helped prepare the families for the trip to the Unites States. She's from Uganda and is a former Children's Heart Project recipient who now works with the organization. She helped the families prepare by encouraging the mothers and instructing them on what to expect once they arrived.

"They both come from small villages with no electricity or running water. You have to imagine -Elijah's home is a small mud hut with a grass roof. They grow their own food and have never been to a large city," said Basemera. "There are people there who believe the children are sick because they have done something wrong - they are being punished."

She said Daniel and Elijah's families had no hope before the Children's Heart Project offered the opportunity for surgery.

The surgeries are life-changing for the children and their families, explained Cindy Bonsall, director of Children's Heart Project. The social and financial burdens along with the stress of having a sick child are a lot for the families to handle. The lives of everyone in the family changes once the child is well, especially the mothers.

The boys and their family members join the team of doctors and Children’s Project representatives who made their surgeries possible.


Elijah and Daniel have large extended families waiting on them to return to the villages. Elijah's mother, Ciccy Makecwa Birungi, said through an interpreter that the family will be excited and joyful when they see a healthy child return home.

"I know God has a good plan for him because there is hope for his future," said Birungi.

Elijah and Daniel are the 37th and 38th patients Sang has helped through Children's Heart Project. Their photos will join pictures of the other children he has helped in his career. He said he volunteers for the program because it's the right thing to do.

"God gave me a talent to use and we are supposed to help others," said Sang.

Since 1997, Children's Heart Project has helped more than 1,100 children from Uganda, Mongolia and Bolivia, where the life-saving treatments they received in the U.S. are unavailable. The Brody School of Medicine and Vidant Medical Center have partnered with the organization for 15 years to help 38 children.
Go Back