Login to Send a Private Message to Bobby Tony
1    Back in 1964 Dr Strangelove, a black comedy satire movie about Right Wing unhinged Military commanders starting a nuclear war, was a parody of the cold war warriors who were concerned about the Russian threat and fluoridation of our water. Back then the liberals thought the concerns about the Russian's intentions was paranoid and overblown.

In following the tone of the book, Kubrick originally intended to film the story as a serious drama. However, as he later explained during interviews, he began to see comedy inherent in the idea of mutual assured destruction as he wrote the first draft. Kubrick said:

"My idea of doing it as a nightmare comedy came in the early weeks of working on the screenplay. I found that in trying to put meat on the bones and to imagine the scenes fully, one had to keep leaving out of it things which were either absurd or paradoxical, in order to keep it from being funny; and these things seemed to be close to the heart of the scenes in question."   Wikipedia


The movie was filmed mainly in England. When asked why he lived and filmed in England Stanley Krubrick ( American expatriate) said:


"Because I direct films, I have to live in a major English-speaking production center. That narrows it down to three places: Los Angeles, New York and London. I like New York, but it's inferior to London as a production center. Hollywood is best, but I don't like living there.
You read books or see films that depict people being corrupted by Hollywood, but it isn't that. It's this tremendous sense of insecurity. A lot of destructive competitiveness. In comparison, England seems very remote. I try to keep up, read the trade papers, but it's good to get it on paper and not have to hear it every place you go. I think it's good to just do the work and insulate yourself from that undercurrent of low-level malevolence."   Stanley-Kubrick--1987


Flash forward fifty-three years and we now have unhinged Democratic politicians fearing the Russians and blaming Donald Trump for being too cozy with them. They are also drinking only bottled water because of their fear of the impurities in the faucet water supply. Hell the movie even had a Russian Ambassador that looked surprisingly like the current one in the news. Have you noticed that many of those Russians living here seem to be enjoying the fruits of a bountiful table courtesy of the capitalist pigs.? 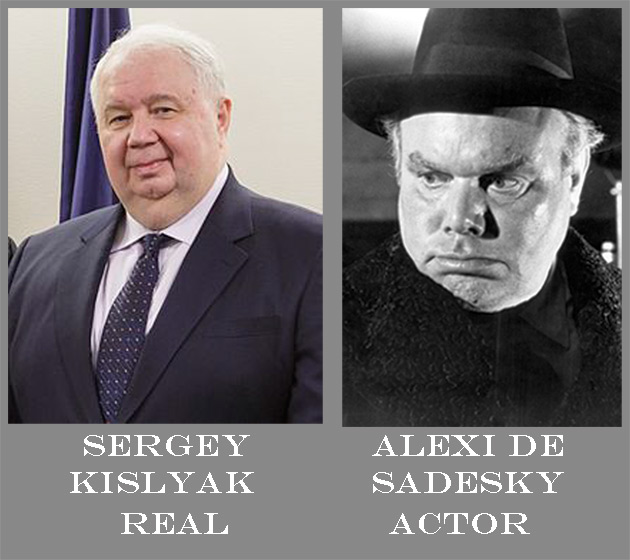 Peter Sellers played the hapless often confused and bewildered President who could not believe or accept what was going on. His counterpart today is Senator Up.Chuckie Shoe.

We have come full circle, which in politics is considered as nuance; not to be confused with actual convictions. Despite the fact that I voted for Barry Goldwater, who the Democrats tried to make into an Unhinged General, Dr Strangelove was and still is one of my all time favorite comedies right up there with The Pink Panther. I would never have dreamed that this would become somewhat a reality show in Washington DC. At the risk of putting too fine a point on this comparison, maybe the only thing that has stayed consistent over the years are the Russians. They are still single focused on World Dominance. Many of the characters have names which are double entendres or innuendos:


Click on picture for larger view
Roger Ebert said in his review of Dr. Strangelove:


"Dr. Strangelove's" humor is generated by a basic comic principle: People trying to be funny are never as funny as people trying to be serious and failing. The laughs have to seem forced on unwilling characters by the logic of events. A man wearing a funny hat is not funny. But a man who doesn't know he's wearing a funny hat ... ah, now you've got something. Roger Ebert

You can't make this stuff up or can you? Or as Alex would say:
Would I kid u?


Here a few clips from the movie which I still think is one of the all time best comedies.The last one is my favorite.