Gordon Lightfoot – Warning Signs on the road of life | Beaufort County Now | Most of us pay no attention to those Warning Signs until it is a bit too late. Then inevitably, we adapt the song as if it was written about us.

Gordon Lightfoot – Warning Signs on the road of life

Login to Send a Private Message to Bobby Tony
What a strange coincidence, I wrote an article about Gordon back in 2013, which I had not submitted to BCN. Just last week I was reminded of him by a flashback prompted by an incident at the Old Folks softball championship game in the neighborhood. I updated the article for my Grandpa's Diaries.

When I saw Stan recently posted an excellent article about one of Gordon's songs, "If You Could Read my Mind," I thought I might as well shamelessly glam onto his lead. Thanks Stan, for the reminder and gathering a crowd for the Old Sarge to abuse with another narcissistic memory. The Icon is a more recent picture of Gordon who is still touring.

Gordon Lightfoot - Warning Signs on the road of life

Some songwriters point the way to dangers ahead based on their past travels. Most of us pay no attention to those Warning Signs until it is a bit too late. Then inevitably, we adapt the song as if it was written about us. Gordon Lightfoot may have been one of those Canaries In the Mine songwriters. 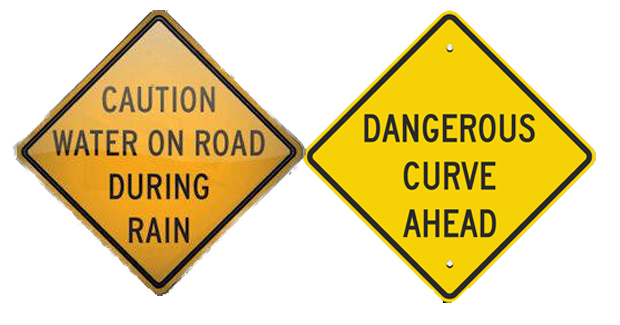 
I followed his music and eagerly awaited his next release. Most of his songs were personal but 7 & 8 above spoke to actual historical events. Gordon wrote number 3 about the breakup of his first marriage. As I was putting the final touches on my broken marriage in 1970, the lyrics held particular meaning for me as well. Anyone who was ever broken someone's heart or had their heart broken can relate to Gordon's pathos.

Then you reached the part where the heartaches come,
The hero would be me.
But heroes often fail

I first became aware of him when he wrote "For Loving me" and "Early Morning Rain" in the 1960s, both of which were made popular by Peter Paul and Mary. "Early Morning Rain" was the anthem of us lonely grunts in the rice paddies of Vietnam in 1968. I wrote about that in my article here:  Dueling Hts PP&M   Excerpt Below:


"Once I got to the Nam, things got fairly hectic my first few months there. Shortly after the TET Offensive we were mopping up the area around Saigon. Then the monsoon hit. You ain't never seen the rain until you are humping the boonies or a rice paddy just outside of Tan Son Nhut or Bein Hoa Air Base (I forget which) with 9 months to go on your tour and you see those big Boeing 707 Freedom Bird Jets take off and fly right over you and your buddies on the way back to freedom and the world. 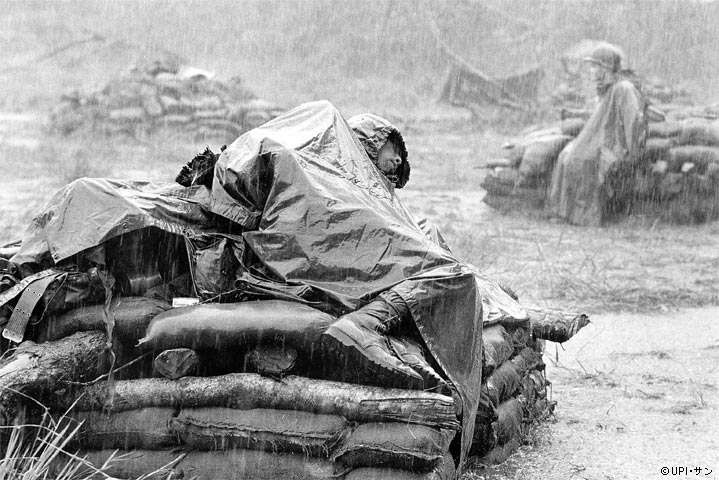 Every word in this song brings back a gusher of memories. Especially the "you can't jump a jet plane like you can a freight train, so I best be on my way, in the early morning rain". You just turn to your buddies and utter the famous Vietnam denial. "It don't mean nothin." 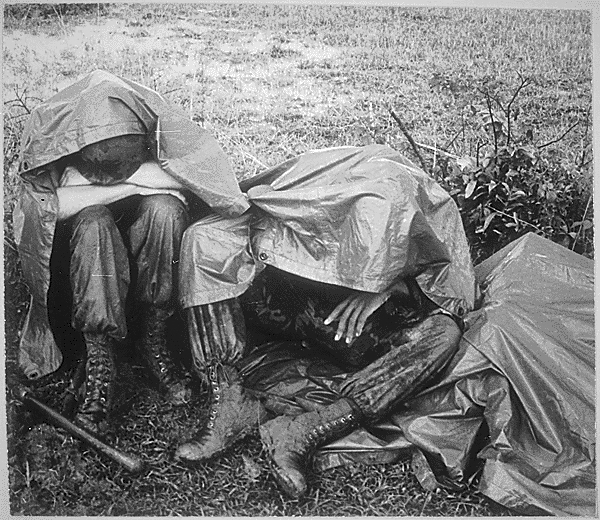 I finally saw him in concert in 1974 in Atlanta and was immediately taken by the fact that he played a huge 12 string guitar. My dad played a mandolin, which is an 8-string instrument, and I was always fascinated by the way the tenor strings rang out. But a 12 string guitar was a bit foreign to my musical knowledge until the late 1960s. After seeing him in concert, I eventually bought one and tried to learn to play it, but unfortunately, a poor quality 12 string guitar merely doubles the buzz that a poor quality 6 string guitar offers. I eventually gave up and sold it, but I never lost my love for the sound of a properly tuned and played 12. Later Don Felder of the Eagles in their song "Hotel California" brought the virtuosity of a 12 string to life.


Some may ask how this could possibly have any link to Gordon Lightfoot but you don't get to pick and choose your FLASHBACKS, they have a mind of their own. Yesterday, I saw a plane heading toward the Atlanta Airport over my neighborhood. My high school buddy and I were sitting at the Softball Park in the neighborhood watching the old farts play the final game of the spring season. 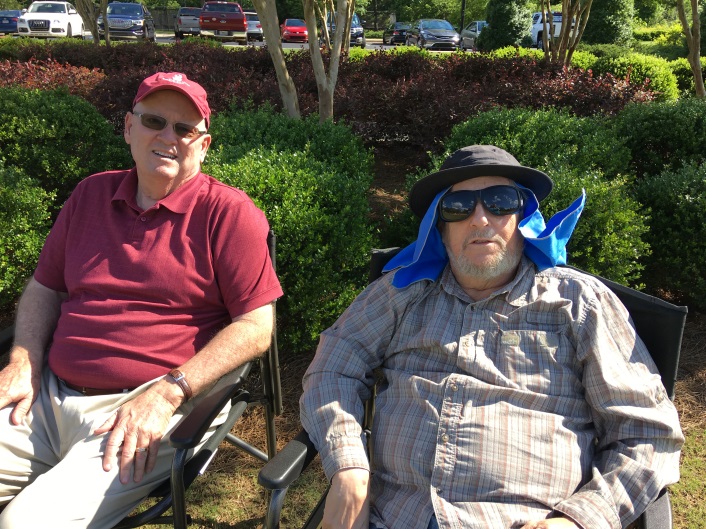 The sky was blue with not a sign of a cloud when I looked up and saw the big jet like a speck in the sky. It was about 10,000 feet up on the final leg into KATL (ATL) but it instantly brought back those memories of watching those Freedom Birds slowly rising and turning toward "The World" almost fifty years ago. I immediately thought about some current 22 year-old infantry Grunt in my old unit (2nd 12th Infantry currently deployed) sitting in the Middle East watching planes come and go. One of the lessons learned in Vietnam is that units come and go (rotate) as Units and not individuals into and out of the war zone as was done in Vietnam.

It was not until later when I noted the date that I thought; "Wow another God Wink." On May 31, 2017 (the same day I was at the ball park), the dedication monument for my old unit was held at Fort Benning, Georgia. Below is how the event was described on our unit Facebook page. 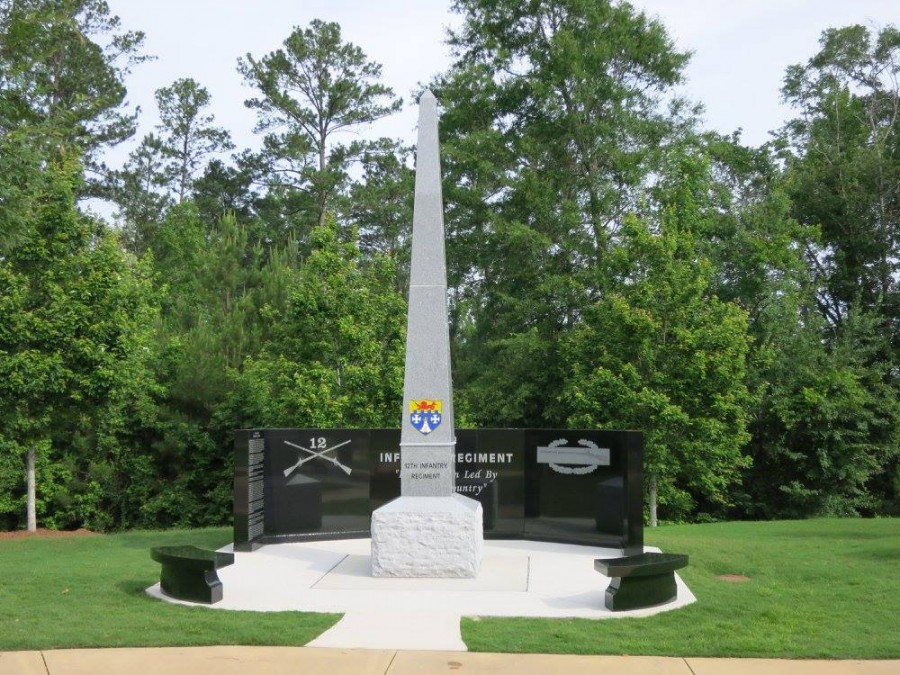 The dedication ceremony itself was very well done. Since this is a Monument, not a Memorial, it is dedicated not only to those who gave their lives, but also to all who served or will serve in the 12th Regiment, specifically the enlisted men. All speakers were enlisted men, or at least started as enlisted men, and most of them were Vietnam veterans. The ceremony ended with the unveiling of the monument and a great deal of appreciation for it's beauty and for the accomplishment of getting it done.

The monument did indeed turn out to be very beautiful. A true work of art. Excellent and detailed workmanship all around. Veterans, active members, and future members of the 12th Infantry Regiment can all be extremely proud if it. It's prominent features are: a list of the 12th's Medal of Honor recipients (7), a narrative history of the 12th Regiment, a list of the conflicts in which the regiment participated, the Combat Infantryman Badge, the Infantry Crossed Rifles, the regimental motto, and the regimental crest.

Attached are a few photos of the monument and also one of many of the veterans of the 12th who attended the dedication. I think more pictures will be posted on the redwarriors.us web site soon.
Just wanted you to know, "It's done." Facebook site post


Gordon is six years older than I and is now 78. Many of his songs pointed were signpost on the highway of pitfalls, self-indulgence and self-pity, which I of course blew right by while wallowing in the haze of excess. I am glad we both survived to look back with a different perspective. He also wrote a song about the Carefree Highway in 1974 that was not so carefree after all.


In retrospect, unlike Gordon's melancholy memory on his life's highway at the time, my life has been on the Real Carefree Highway pretty much all along the way.

I guess the old Vietnam denial was wrong;
IT DOES MEAN SOMETHING AFTER ALL!!!!