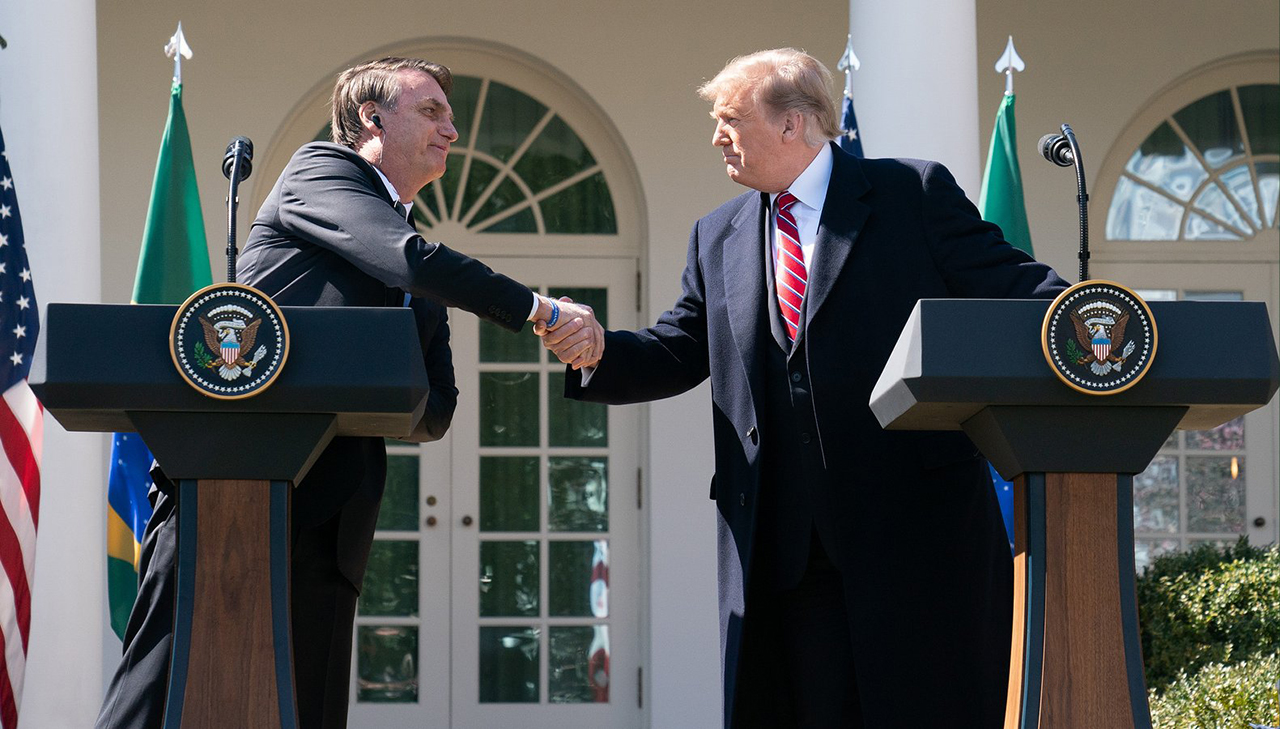 President Trump meets with President Bolsonaro of the Federative Republic of Brazil: Above. (White House photo)     Click image to expand.

PRESIDENT TRUMP: Thank you very much everyone. Thank you. Today, I'm very thrilled to welcome President Bolsonaro of Brazil for his first visit to the White House. President Bolsonaro, I want to congratulate you again on your tremendous election victory last October. It was an incredible feat and, really, a truly incredible challenge. And the end result was something the whole world was talking about.

I also know that we're going to have a fantastic working relationship. We have many views that are similar. And we certainly feel very, very true to each other on trade. I think Brazil's relationship with the United States, because of our friendship, is probably better than it's ever been by far.

I also want to congratulate you on your recovery from a truly horrible ordeal. It was an incredible recovery, and the people of your country know it. The great bravery you've shown - tremendous bravery.

For two centuries, the American and Brazilian people have been united by shared values, including an enduring love of faith and family and country.

The United States was the first nation to recognize Brazil's independence in 1822. And in the Second World War, Brazil was the only South American country to contribute troops to the Allied war effort.

Today, the United States and Brazil are the two largest democracies and economies in the Western Hemisphere. We're in close agreement on the incredible opportunities and continuing challenges facing our region. And we have a truly historic chance to forge even stronger ties between our two great nations.

This afternoon, the President and I discussed many of our mutual priorities, including Venezuela. Brazil has been an extraordinary leader in supporting the Venezuelan people's efforts to reclaim their liberty and their democracy. Brazil has helped so much. Along with the United States, Brazil was one of the first nations to recognize Venezuela's legitimate Interim President, Juan Guaidó.

I also want to express our profound gratitude to President Bolsonaro and all the Brazilian people for their efforts to provide humanitarian aid. We also thank you for allowing the United States to station extensive assistance and massive aid on the Brazilian border. The Brazilian people have been incredible.

Together, we could - and have been, really, very happy to feed thousands and thousands of starving Venezuelans. The Venezuelan people have appreciated it. And if the Maduro forces would step aside, it could be a truly great and successful humanitarian project.

We call on members of the Venezuelan military to end their support for Maduro, who is really nothing more than a Cuban puppet, and finally set their people free.

The United States and Brazil are also united in support of the long-suffering people of Cuba and Nicaragua. The twilight hour of socialism has arrived in our hemisphere. And hopefully, by the way, it's also arrived - that twilight hour - in our great country, which is doing better than it's ever done economically. The last thing we want in the United States is socialism.

So, President Bolsonaro, I will tell you that we'll be consulting and talking a lot. We'll be working on all of our both problems and assets. And we're making tremendous strides. We had a great meeting today.

As I told President Bolsonaro, I also intend to designate Brazil as a "Major Non-NATO Ally," or even possibly, if you start thinking about it, maybe a NATO ally - have to talk to a lot of people, but maybe a NATO ally - which will greatly advance security and cooperation between our countries.

Our nations are already working together to protect our people from terrorism, transnational crime, and drugs and weapons trafficking. Also, human trafficking, which has really become something that has come to the forefront of crime. Horrible, horrible situation. We look forward to an even deeper partnership and working together.

In our meetings, we also discussed the strong economic ties between our nations, grounded in the principles of fairness and reciprocity. My favorite word: reciprocity.

President Bolsonaro and I are both committed to reducing trade barriers, facilitating investment, and supporting innovation across a range of industries, particularly energy, infrastructure, agriculture, and technology.

The President's vision for freeing the private sector and opening the economy is the right way for Brazil to achieve strong economic growth. And our great companies are ready to go when that table is flat and free.

To improve our business relationships, we have revived the U.S.-Brazil CEO Forum, and we have started a new U.S.-Brazil Energy Forum. We welcome Brazil's aspirations to join Organization for Economic Cooperation and Development, a laudable goal and one that will make Brazil's status as a developing and developed country. We also hope that all of us will be able to work together - all nations.

I'm also pleased to announce that after 20 years of talks, we are finalizing a Technology Safeguards Agreement to allow U.S. companies to conduct space launches from Brazil. It's actually an incredible location when you study it and when you see it. We won't go into it now. But because of the location, tremendous amounts of money would be saved. To put it very simply: The flights are a lot shorter.

Brazil's proximity to the equator makes it an ideal launch location. My administration is committed to reviving America's proud legacy in space. We're looking very strongly, as you know, and working together with everybody on Space Force. And we are grateful for Brazil's partnership.

Mr. President, thank you again for the honor of your visit today. A strong and thriving friendship between the United States and Brazil is essential to a future of security and prosperity for all of our citizens. It's been a wonderful time getting to know you. You're doing a fantastic job. You've brought the country together. And I look forward to working with you in a very close relationship for many years to come. Thank you. Thank you very much.

Mr. President, thank you very much.

PRESIDENT BOLSONARO: (As interpreted.) Your Excellency, Mr. President, Donald Trump, the President of the United States of America; my Cabinet ministers; members of the delegations joining us in this session today both from Brazil and from the U.S.; and ladies and gentlemen, media professionals, other guests: Thank you very much, President Trump, for your warm hospitality. It is an honor for us to be in Washington as part of my first bilateral trip ever since I was elected President of Brazil.

I would like to use the opportunity, by the way, to invite you to reciprocate this visit because you will indeed be very welcomed by the Brazilian people, at large. We do share a great deal in common.

I have always admired the United States of America. And this sense of admiration has just increased after you took office, at the presidency.

This meeting of ours today restores an old tradition of partnership. And, at the same time, it starts a new chapter of cooperation between Brazil and the United States. Inasmuch as today, we have revisited and have again decided to promote matters that were on our order of business for decades.

It is time to overcome old resistance and explore the very best potential that is there between Brazil and the United States. After all, it is fair to say that, today, Brazil does have a President who is not anti-American, which is really unprecedented in the past few decades.

The reforms we are currently undertaking have changed Brazil into an even more attractive country. We are strongly committed to striking a proper balance in government accounts and also, of course, totally changing the business environment. U.S. support to Brazil's accession to the OECD will be clearly interpreted or construed as a gesture of mutual understanding, which will be very emblematic as part of the closer and closer ties we aspire to.

The private sectors of both countries should remain a high-profile player in our relations. And that is why we have decided to restore the CEO Forum between Brazil and the U.S. We also intend to attach priority to relaunching an energy forum with an emphasis on oil, gas, and other sources of energy.

The Brazilian government, as a sign of goodwill, has granted whole visa exemption to U.S. nationals, with a view to further encouraging tourism and business travels.

On the defense and space cooperation work front, we have signed a Technology Safeguards Agreement, which will, in turn, enable the Alcântara Satellite Launch Center.

Military cooperation has also expanded as we seek out partnerships in the development of defense systems. Science, technology, and innovation activity can certainly be expected to take on an increasing role as part of our bilateral agenda, hence our proposal to launch an innovation forum between Brazil and the U.S.

Efforts to tackle terrorism and organized crime is a matter of utmost urgency for our two peoples. We have decided to strengthen our bilateral security forum and do more against money laundering and drug trafficking.

Reestablishing democracy in Venezuela is also a shared interest between our two administrations. The dictatorial regime in Venezuela today is part of a broader international coalition, known as the "São Paulo Forum," which nearly conquered power throughout Latin America in recent times. However, by democratic means, we were able to rid ourselves from that project in Brazil.

In conclusion, may I say that Brazil and the United States stand side by side in their efforts to ensure liberties and respect to traditional family lifestyles, respect to God, our Creator, against the gender ideology or the politically correct attitudes, and against fake news.

Drawing inspiration from Ronald Reagan, I wish to bring to Brazil his administration style, as summarized in the following citation: People should say what the government can do, and not the other way around.

Once again, may I voice my admiration and recognition to President Donald Trump on this beautiful day where we seal a promising alliance between the two most promising and largest democracies in the Western Hemisphere. May God bless Brazil, and may God bless the United States of America. Thank you very much, Mr. President. (Applause.)

PRESIDENT TRUMP: So we'll take a couple of questions.

Q Thank you very much, Mr. President. On Venezuela, you did the tough sanctions and you sent the aid, but it seems like Maduro is no closer to leaving. And I'm wondering if you're getting worried about losing momentum. And how long are you being told that this going to take?
Go Back