While many of their friends enjoyed summer vacations, a group of students considering careers in health care got a dose of what the first year of medical school has to offer.

Every summer, the Summer Program for Future Doctors (SPFD) provides a unique, firsthand view of medical school or those considering a career in medicine. Program leaders and students within the SPFD have described the program as closely simulating the first year of medical school, known as the M1 year.

"It's a testing ground for them to see if they're ready for medical school, and sometimes they find out that they need to do some more work. We guide them on that," said Dr. Richard Ray, director of the SPFD. "We do hope that they will come to Brody after they finish, and we're proud of them wherever they go because our goal is to develop the physician force wherever they go." 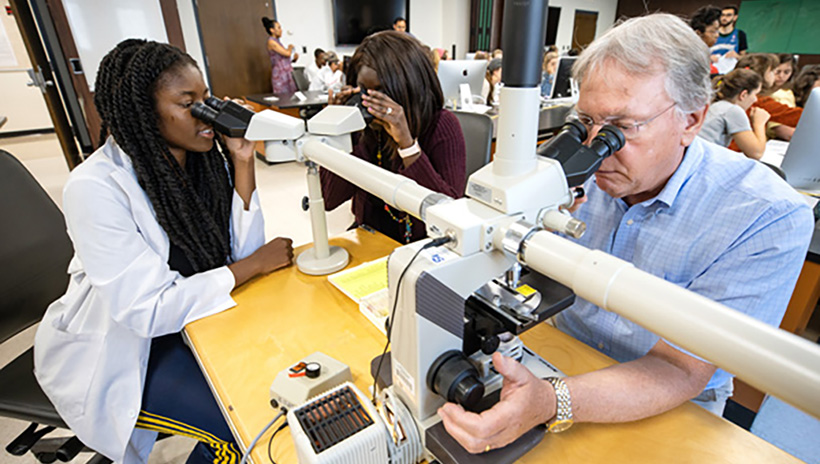 Dr. Warren Knudson looks at digital images of slides on a computer during a histology lab with participants in the Summer Program for Future Doctors. | Photo: Rhett Butler
UNC-Chapel Hill '17 graduate Parth Panchal described the warm welcomes and investment from Brody's administrators as a significant influence for pursuing medical school during the Summer Program for Future Doctors. Panchal said that Dr. Emily Askew, assistant director of SPFD, ensured that the program participants were guided toward a successful and enriching experience.

"They treat you like you're a family. They want what's best for you," Panchal said. "I've especially noticed that with Dr. Askew. For our anatomy class, every single day she made sure we knew everything and made sure that all of us were on top of our game."

Panchal said that Askew also gave the students motivational quotes and support to aid with burnout and preparation for their bi-weekly exams.

Panchal said the SPFD teaching assistants (TA), who are current Brody students, mentored participants through the program. Other students like Boluwatife Aluko also appreciated the investments of the teaching assistants. Aluko said the small size of the cohort, along with how supportive the TA's have been during the program, removes the sense of feeling "lost in the pile."

Aluko plans to gear her practice as a physician in women's health toward helping victims of domestic violence. She learned that this was her passion while working as a domestic violence and sexual assault advocate and was further inspired by the student-led clinic at Brody.

"I can sit down and talk to someone and we can figure out a plan together, just like what I've been able to do with domestic violence and sexual assault survivors," she said. "The student-led clinic that they do here is pretty much exactly like that."

Aluko said the SPFD helped her view Brody as an environment where students will aid one another and "see the humanity" in their peers that flows into their patient care. SPFD participants had begun each day at 8 a.m. and experienced neuroanatomy classes, burnout workshops, physician shadowing, labs and more.

Because the program targets students of non-traditional, underrepresented and disadvantaged backgrounds, it provides these potential students an opportunity to see themselves in medical school and particularly as part of Brody, which emphasizes diversity as part of its mission.

A five-year analysis on the success of the summer program shows that the SPFD significantly increases the likelihood of students' admission to medical school.

SPFD also uses economic tier status designated by the North Carolina Department of Commerce to target students in North Carolina's most economically disadvantaged areas, with the goal of sending more doctors to these areas.

Askew says that the program is dedicated to "building up the next generation's physicians" in hopes that they will pursue Brody for medical school.

"I think another goal outside of giving them academic foundation and helping handle the course work or seeing how they need to further prepare to succeed in medical school is also the clinical aspect," she said. "They do clinical exposure and experience when they shadow a physician or in the sim lab."

Askew said the program allows the students to network with Brody faculty, current medical students and engage with clinicians in the community. Ray and Askew, meanwhile, are given the opportunity of training the next generation of students as young as rising college juniors.

Ray views the program as one of the parts of his job that he likes the best.

"I can see the effect. I can see the positive impact we can have on young people's lives and sometimes it's really transformative and that's how they describe it," he said. "Some of them have applied unsuccessfully to medical schools in the past, and once they go through the program and show everybody that they can do it, they get offers at multiple schools. That's impactful and that's something I enjoy about it."