Pirates Fall in Overtime at Temple | Beaufort County Now | After more than 95 minutes of scoreless action, the ECU soccer team fell to Temple 1-0 in overtime on Sunday afternoon.

Pirates Fall in Overtime at Temple 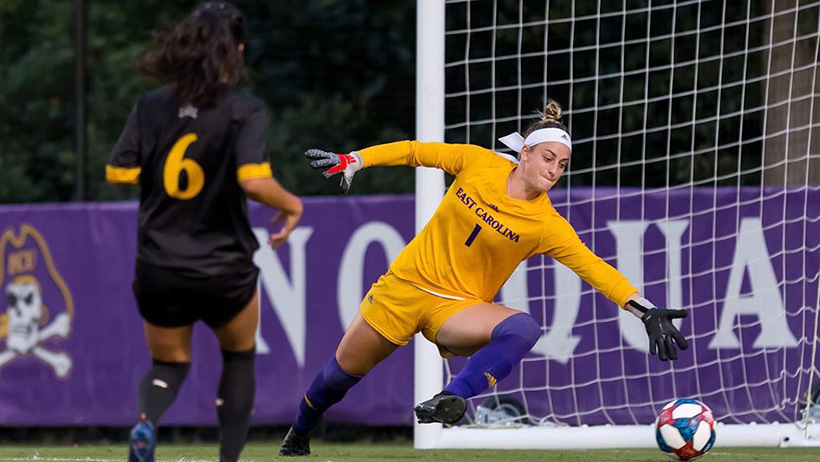 PHILADELPHIA, PA.     After more than 95 minutes of scoreless action, the ECU soccer team fell to Temple 1-0 in overtime on Sunday afternoon.

"We are a little disappointed to have left that out there," said head coach Jason Hamilton. "This is the one game we had more depth than our opponent as they are dealing with injuries as bad as we are. Sunday games are all about outworking your opponent and you have to give credit because Temple outworked us in that game."

For a game that did not feature any goals during regulation, there were still plenty of shots. Both teams took five shots in the first half, including two on goal for each squad.

The Pirates just missed taking the lead in the 79th minute. Jenna Dages powered a header towards the Temple goal and it looked like it had the Owl goalkeeper, but Morgan Basileo recovered and grabbed it just before it crossed the line. That was one of three saves Basileo made in the final 15 minutes while ECU's goalkeeper, Melanie Stiles, matched her with three stops of her own over that span.

After 90 minutes, the two teams went into extra time. ECU had the first chance of the overtime, but Cashlin Copley's shot was saved by Basileo. Then, in the 96th minute, a Temple throw-in led to the Owls getting the ball to the end line and crossing into the ECU box. While the Pirates dealt with the initial danger, Julia Dolan was able to control the ball and drop a pass to Gabriela Johnson who was waiting at the top of the box. Johnson knocked a rising shot into the top corner of the frame for the game-winning goal.

"This wasn't ever going to be a pretty game, but Temple executed in overtime and took advantage of us not being focused and the fatigue led to some mental errors," Hamilton said.

ECU finished with a narrow 13-12 edge in shots while Temple had a 5-2 advantage in corner kicks. Stiles finished with five saves for ECU and Basileo made six stops for the Owls.

"We are going into a much needed bye week," Hamilton added. "We have been pushing some players to their limits and some banged up players playing through injuries. These next couple weeks will hopefully allow them to get healthy and those who's played so many minutes some rest."

ECU will have some time to get healthy as the Pirates do not play again until October 10. The Pirates will host Tulsa on that day inside Johnson Stadium.
Go Back