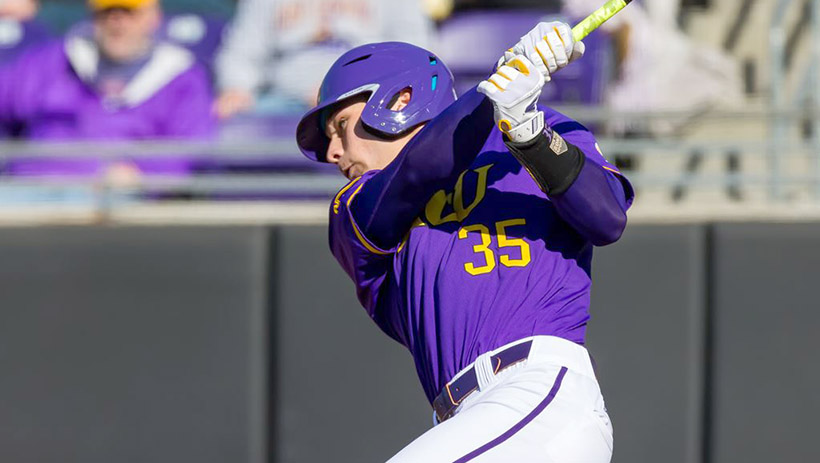 ELON, N.C.     Cam Colmore tossed four scoreless innings and Bryson Worrell drove in three run helping No. 17 East Carolina to a 7-2 road win over Elon Tuesday afternoon at Latham Park. With the win the Pirates improve to 7-1 on the season, while the Phoenix fall to 6-2.

For the fourth-straight game, ECU jumped out to an early lead scoring three runs in the first frame. Lane Hoover started the contest with a single up the middle and took third on a failed pickoff attempt by Evans before coming home on Zach Agnos' RBI groundout. With Thomas Francisco standing at first following an infield single, Worrell's opposite field home run pushed him across and staked the Pirates to a 3-0 lead.

On a designated staff day, ECU pitchers held Elon to five hits over nine frames fanning nine and not issuing a walk. Colmore (1-0) earned the win retiring all 12 batters he faced (three via strikeout) after entering the game in the third inning. Starter Trystan Kimmel worked two scoreless frames surrendering one hit and striking out one. After Colmore, the Pirates used four arms out of the bullpen to secure their seventh victory of the year in Parker Boyle (0.2 IP, 2 Rs), Garrett Saylor (0.1 IP, 1 K), C.J. Mayhue (1.0 IP 1 K) and Skylar Brooks (1.0 IP, 2 Ks).

Elon finally got on the board scoring a pair of runs with two outs in the seventh. With J.P. Sponseller standing on first, Garrett Stonehouse doubled to left-center for the Phoenix first run of the game. Matt Oldham followed with a base knock through the right side scoring Stonehouse and pulling within one, 3-2.

The Pirates put the game out of reach in the eighth scoring four runs on two hits for a 7-2 advantage. With Agnos on second and Burleson sitting on first, Francisco drew a walk seeming to load the bases. But an errant throw by catcher Nick Cici allowed Agnos to score and Burleson took third. Worrell followed with a sac fly to center pushing across Burleson for the second run of the frame. Christian Jayne entered as a pinch-runner for Francisco and immediately took third on Connor Norby's single to center. Trevor Losito dropped down a sac bunt plating Jayne and after a balk, Norby scored from third on an O'Connell wild pitch to cap the scoring at 7-2.

ECU out-hit Elon nine to five in the game and got a pair of base knocks from Hoover and Worrell. Five other Pirates had hits in the contest in Agnos, Seth Caddell, Francisco, Norby and Smallwood.

The Pirates return home Friday, Feb. 28 when they host the 17th Annual Keith LeClair Classic at Lewis Field inside Clark-LeClair stadium. ECU will open the event against Indiana with first pitch scheduled for 4:30 p.m. (ET).