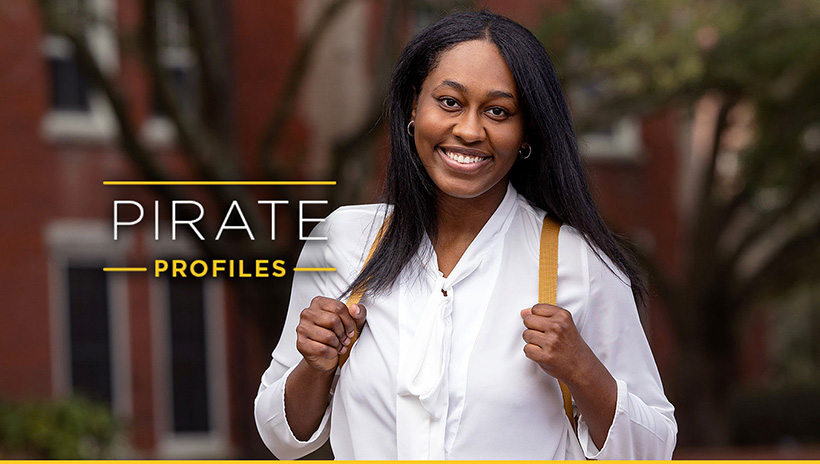 Photos: Rhett Butler
Erycka Anderson's dream is to be a professional actor, and the experiences she's had as an East Carolina University student are helping her achieve that goal.

Anderson is a senior in the School of Communication, where she is studying public relations. After graduation in May, the Fayetteville native plans to move to Atlanta to pursue an acting career while working with a social media platform. 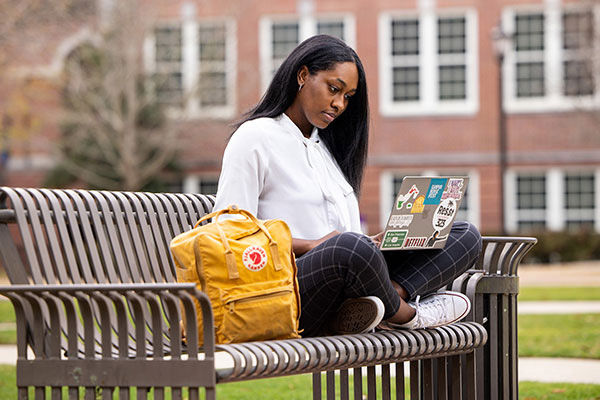 Erycka Anderson, a senior communication major, works on her laptop on ECU’s campus.
"I chose ECU because this was the school that I knew would have an influence on me in the best way, and as I approach my final semester, I can say that was correct," Anderson said. "I knew going into a field of communications would give me the necessary knowledge for any media-focused career I would pursue."

While she's been involved in several campus events and organizations, she said serving on the arts and entertainment committees of ECU's Student Activities Board (SAB) has been the most meaningful. Anderson photographed, videoed and created recap videos of SAB events for the organization's social media platforms.

"I filmed and edited most of the events for three out of my four years there," she said. "For me, that's where most of the connections I made came from, and I'm grateful for all the people and experiences I've had because of SAB."

Outside of ECU, Anderson has trained with top professional acting coaches including Kimberly Crandall from ABC's "Fresh Off the Boat" and James Ciccone from HBO's "The Deuce" as well as talent manager Wendy Alane Wright and others, she said.

"When I'm not in class, I'm consistently finding shows and films that fit who I am as an actress to perform scene study and watch how the characters interact with not only the people but the circumstances they're under in their scenes," Anderson said. "It helps me to better prepare for auditions."

A benefit from the pandemic is that it has given Anderson more time to audition for networks like Netflix and Hulu. And she was able to turn her garage at home into a ministudio to practice hip-hop, which she did in the dance studio in the Student Recreation Center before campus closed.

"Truthfully, I've been blessed to be able to focus on my skills and work from home as I continue to set myself up for success. I'm doing my part in staying safe and wearing my mask anytime I need to go anywhere but other than that I've always focused on the positive, which is now having the time to prepare myself for where I want to see myself in the future."

Her not-so-distant future includes Atlanta, which has a thriving entertainment industry and from where most of Anderson's auditions come. "Being centrally located there would increase my opportunities," she said. "I have family, friends and ex-castmates from a few film productions I've been a part of. Knowing that makes it much more comfortable to continue my endeavors there."

Your words to live by: "Good thing, bad thing. Who knows?" Meaning whichever way the odds played out to you, you never know if it'll be something that puts you in a position of character development or if it's the key to what you've been praying for. All you can do is live life being the best person you can be, and life responds to the positivity and confidence you put out. No matter how many times life knocks you down, get up and do it differently.

What advice do you have for other students? Enjoy this time at ECU. It goes by in an instant. You may not think so because you're doing so much to consume your time but sometimes sit back and go enjoy your college years. I was always working hard to get where I wanted to see myself, but I also didn't forget to live life. That quiz will be there when you get home. Go have fun.

What is something cool about ECU that you wish you knew during your first year? I wish I knew about the dance studio in the student recreation center. I would've reserved most of my time freshman year there to practice dance had I known. It's a great stress reliever!