Published: Saturday, January 23rd, 2021 @ 8:05 am
By: Carolina Journal   ( More Entries )
Publisher's Note: This post appears here courtesy of the Carolina Journal. The author of this post is Ray Nothstine. 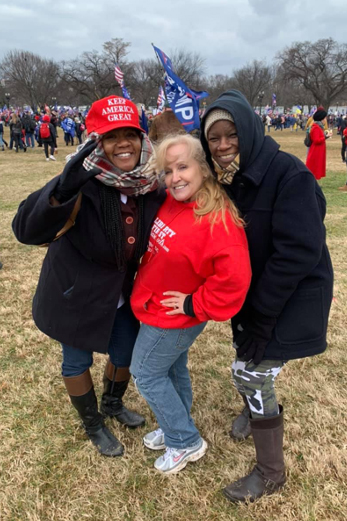 photo provided by Sherry-Lynn Womack
Sherry-Lynn Womack finds herself in the proverbial hot water. Her crime? Womack went up to Washington, D.C., for the rally for Donald Trump on Jan. 6. The Lee County school board voted to open an investigation into her actions. She was just reelected to the very same board in November. Yet, Womack wasn't near the Capitol building and didn't engage in any violence. Her crime appears to be more akin to merely supporting Donald Trump, something over 74 million Americans did with ballots.

Womack was exercising her First Amendment rights in a peaceful manner. Several North Carolina media outlets are reporting that over 50 individuals demand she resign her position, saying she is culpable for the melee and chaos at the Capitol. Some, without any evidence of a crime, appear to be turning her into the state attorney general for prosecution.

John Locke President Amy Cooke in a Jan. 14 video message rightly condemned the violence in our nation's capital. Anybody sane should. Mob violence and anarchy are never beneficial for ordered liberty or a healthy republic. Those kinds of actions have nothing to do with conservatism.

Many that showed up at the rally did so because they doubt the validity of the presidential election. Womack disputes that was her intention but that too is a right as an American.

"Conscience is the most sacred of all property," wrote James Madison. One doesn't even have to be right to be deserving of defense under the First Amendment. In the criminal justice system, even our most heinous criminals are entitled to a defense.

It's not entirely clear if the NC media stories are meant to drum up more outrage about Womack's presence but certainly, there is no intention of portraying her in a glowing light either. Still, I was interested in digging a little deeper into her story since so many seemed to be aggrieved — even triggered by her presence at a political rally.

Womack enlisted in the Army at 17. She became a warrant officer and went to Army Officers Candidate School (OCS) and retired as a lieutenant colonel after serving her country for 33 years. In an October interview, she says she served in two combat zones and is the recipient of a couple of Bronze Stars and the Legion of Merit. Presumably, she has done good things for her country.

Obviously, the vast majority of people who went to D.C. to support Trump are not bad or even dangerous citizens. One of the most amusing things in politics today are the calls for unity coupled with bloodlust for otherwise peaceful political opponents. These are the tactics of those who are tired of debate and merely want to silence their critics. It's a common story we've read about in history or current events. Unfortunately, we are learning that we aren't immune to it here. Furthermore, our politics should never be so central to our lives that we feel justified in muzzling the opposition. This is when mere politics morph into totalitarian practice.

Millions of Americans are rightfully outraged by the despicable behavior of those that stormed the Capitol and revealed anew the dangers of mob tactics, whether from the political left or right. Yet, citizens should be outraged too about the excitable thirst for silencing and squashing dissent.

The prolonged absence of any free exchange of information within a country opens up a gulf of incomprehension between whole groups of the population, between millions and millions," wrote Aleksandr Solzhenitsyn in "The Gulag Archipelago." Obviously, unity is never cultivated through political fear and intimidation.

We are a nation in need of dissenting voices and as former first lady Hillary Clinton reminds: We have a right to dissent, and that to dissent is the essence of what it means to be American." If we can't agree on that simple truth, we will only continue to drive good people out of the public square while forfeiting our great inheritance of liberty.