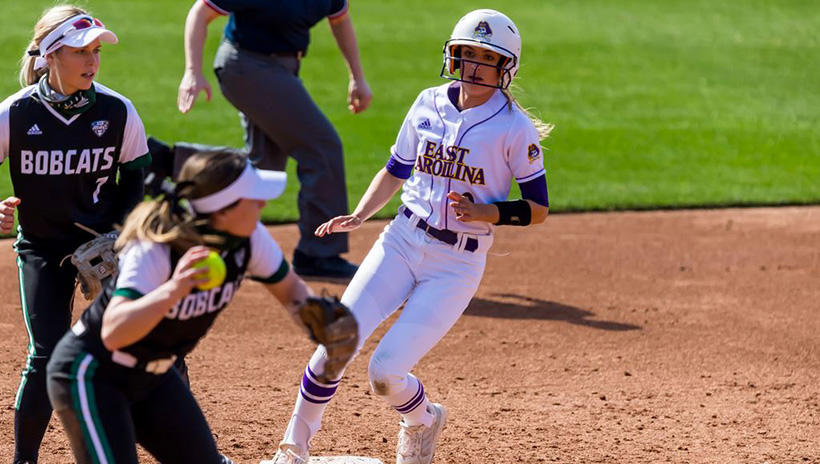 The Pirates improve to 8-2 overall for the second time in three seasons under head coach Courtney Oliver. Meanwhile, the Bobcats leave Greenville winless at 0-5.

Redshirt senior infielder Rachel McCollum became the first ECU player to record four hits in a game this season and the first since she herself collected four at Memphis back on March 22, 2019. Junior infielder Ashleigh Inae had a nice day at the dish, going 2-for-3 with three RBI. Additionally, freshman outfielder Logyn Estes extended her current hitting streak to eight games. Mikenzie Vaughn paced the visitors with a pair of hits and a walk.

Junior RHP Whitney Sanford (2-0) was credited with the win in relief as she threw two scoreless innings and limited Ohio to a pair of hits. Holly Brehm (0-1) took the loss after surrendering five runs (one earned) on five hits with a walk and no strikeouts in just 1.2 innings of work.

East Carolina out-hit the Bobcats 12-5, reaching double figures in the hits column for the fifth time this season. The Pirates exit the weekend batting .350 as a team.

Ohio put up its initial threat in the top of the first when Vaughn and Katie Yun singled consecutively with one out. Unfazed, ECU starter Kama Woodall induced a pair of pop ups on the infield to terminate the half inning.

The Pirates broke the game open in the bottom of the second, scoring five runs to build a lead that the Bobcats never threatened. McCollum began the outburst with a single up the middle before sophomore infielder Bailey Ledvina lined a base hit through the left side. Sophomore utility Keira Womack then drew a walk to load the bases and freshman catcher Sophie Wools sent a single through the left side to plate the game's first run. After a fielder's choice force out at the plate, a fielding error brought home the second run and Inae cleared the bases with a three-run double to the right center gap that left East Carolina with a sizable 5-0 advantage through two complete.

The Bobcats attempted to cut into ECU's lead in the sixth and seventh frames, but junior RHP Erin Poepping subdued Ohio's threat each time. With the bases loaded in the bottom of the seventh and two away, Molly Troutman served as the visitors' last chance. She lined out to second to end the contest.

Up Next: East Carolina makes the brief trip over to Buies Creek Wednesday evening for an in-state showdown with Campbell at Amanda Littlejohn Stadium. First pitch is set for 5 p.m.
Go Back