Pirates Fall in Regular Season Finale | Beaufort County Now | Despite a strong second half, the ECU women's basketball could not overcome a first-half deficit with the Pirates falling to Tulane 77-60 on Tuesday night. 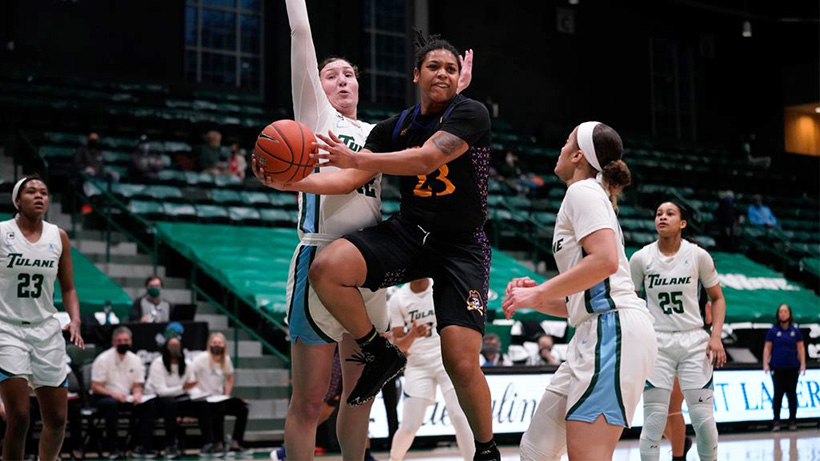 NEW ORLEANS, LA.     Despite a strong second half, the ECU women's basketball could not overcome a first-half deficit with the Pirates falling to Tulane 77-60 on Tuesday night.

The first half was entirely dominated by Tulane, mainly thanks to the Green Wave defense. Tulane held ECU to 7-of-30 (.233) shooting in the opening 20 minutes and forced eight Pirate turnovers. The Pirates scored just eight points in the first period and then seven in the second. The Green Wave truly grabbed control of the game by rattling off an 18-0 run through the majority of the second half and led 43-15 at the halftime break.

Despite that massive deficit staring them in the face, the Pirates came out in the second half determined to go out fighting. The Pirate defense began to click in the third quarter. ECU forced 13 Tulane turnovers in the period and that led to 18 Pirate points. Maddie Moore was a major piece of that, as the junior scored nine points, grabbed five rebounds and had three steals in the third. Supporting Moore was Sierra DaCosta and Taniyah Thompson, who each scored five points. The trio scored 19 of ECU's 25 points as the Pirates cut the Tulane lead to 14 heading into the final frame.

The comeback seemed to fizzle out in the early going of the fourth, with Kaila Anderson hitting a pair of three's in the first 90 seconds to push the lead back to a comfortable 60-42. However, ECU did not quit. Back-to-back layups from Ryann Evans and Thompson were followed by a triple from Thompson. Thompson followed that with a steal and then a feed to Lashonda Monk for a layup to cap a 9-0 run and cut the deficit to just nine at 60-51.

Unfortunately for the Pirates, they could not get any closer. Arsula Clark made a pair of layups before DaCosta hit her first triple of the game, making it 64-54. From there, the Green Wave rattled off a 7-0 run. By the time Anderson hit her third triple of the period with 1:05 to go, the score was 75-55.

Four Pirates scored in double-figures, led by Thompson's 14 points. Monk finished with 12, Moore added 11 and DaCosta had 10 points. Moore finished with 10 rebounds for the second double-double of her ECU career. Jerkaila Jordan led Tulane with 20 points while Krystal Freeman had a double-double of her own, finishing with 11 points and 13 rebounds.

Tulane had a 44-32 edge in rebounding while East Carolina had a 27-17 advantage in turnovers forced.

The Pirates will now turn their sights to the American Athletic Conference Championship in Fort Worth, Texas. East Carolina, which earned the No. 6 seed in the league's tournament, will open the postseason on Tuesday, March 9 at 10 p.m., against No. 3 seed Houston.