Pirates Fall To UCF in Return To Play 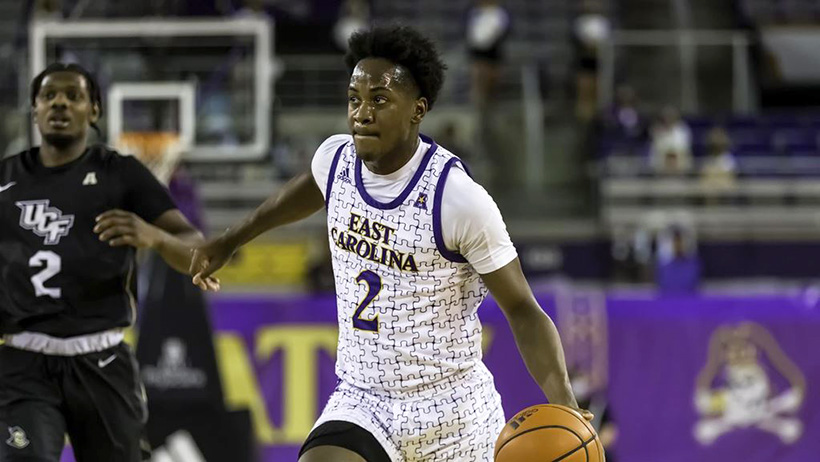 The Knights finish the regular season with a record of 10-11 and 8-10 in The American while ECU falls to 8-9 overall and 2-9 in conference play after taking the court for the first time in 24 days tonight due to COVID-19 related issues.

UCF got off to hot start as Adams made a trio of 3s in the first three minutes to take an early 10-point lead, 13-3. Adams later went coast to coast to put the Knights ahead by 13, 18-5, with 13:29 left in the half and forcing Pirate head coach Joe Dooley to call his second timeout in the first seven minutes.

ECU answered with a 15-6 run, scoring nine unanswered points, to pull within four, 24-20, with 7:32 remaining in the half. UCF outscored ECU by four the remainder of the stanza and led 36-28 at halftime.

The Pirate came out of the locker room hitting on all cylinders and twice pulled within three points in the first four minutes. However, UCF wouldn't yield and pushed its lead back to eight with 8:15 remaining.

Tristen Newton's final 3-pointer of the game cut ECU's deficit to four with 1:08, but were unable to overcome its slow start despite getting a pair of defensive stops in the final minutes.

Newton and Jayden Gardner each scored 18 points to lead the Pirates.

POSTGAME QUOTES     "It was very frustrating. A lot of things that ended up happening were self inflicted and some of it was they also made some plays. We'd get it to two and there would be a four point swing, we've get it to three and then there would be a 4-0 run to get it back to eight. We kept chipping away. We obviously never took the lead. I though we had some opportunities and we made some runs." – ECU Head Coach Joe Dooley

"It was very tough. Three weeks off, very hard. They hit us in the mouth early. I think they've played like nine games since we played, basically every other day. They came out with a rhythm and confidence. We established ourselves and we got back into the game." – ECU forward Jayden Gardner

"It was very frustrating. We were down two at one point and they threw the ball off the backboard and it just happened to get in their hands, and they made a layup. It all started getting down in the beginning. We just have to play better in the beginning, and in the end, we'll be all right." – ECU guard Tristen Newton