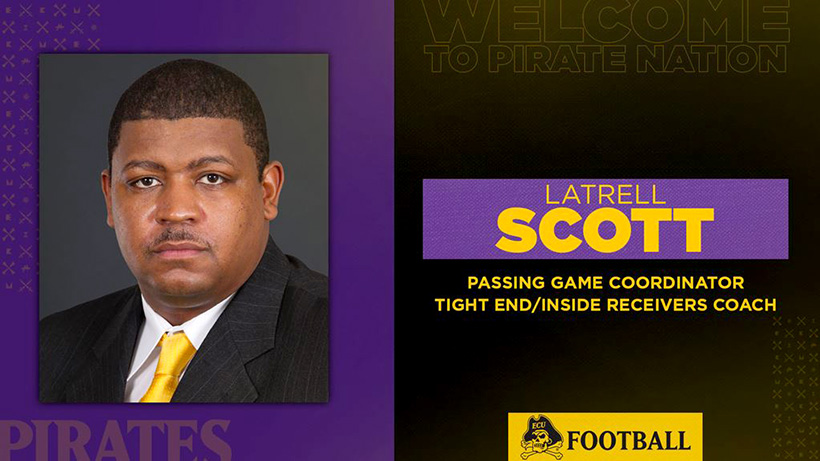 GREENVILLE, N.C.     Latrell Scott has been named passing game coordinator, tights ends and inside receivers coach at East Carolina University according to an announcement from head football coach Mike Houston on Thursday.

His appointment to the Pirates' staff ends a five-season head coaching tenure at Football Championship Subdivision (FCS) member Norfolk State University and extends a 19-year collegiate coaching career which began in 2001. In addition to NSU, Scott also directed programs at the University of Richmond (2010) and Virginia State University (2013-14), compiling an overall record of 41-37.

"We are thankful to have someone of Latrell's leadership experience on our staff," Houston said. "His player development credentials are matched by few and his recruiting ties run deep. He is someone I know well, place absolute trust in and certainly value."

Before the pandemic cancelled the Spartans' 2020 campaign, Scott led Norfolk State to its best season in eight years by winning five games against a 2019 schedule that featured a pair of FBS opponents. NSU, which captured victories in three of its last four contests, turned in the most prolific offensive performance in the school's Division I history by averaging 28.9 points per game, while ranking second and third in the Mid-Eastern Athletic Conference in passing and rushing, respectively.

A total of 13 Spartans earned All-MEAC honors in 2019, upping the number of all-league selections under Scott's leadership to 37 since 2015.

During Scott's first season as the Spartans' head coach in 2015, linebacker Deon King became the first consensus First-Team FCS All-America choice in school history and won the Buck Buchanan Award as the nation's top FCS defender before embarking on an NFL career.

VSU turned in a 10-3 mark, won its first outright CIAA championship since 1996 and recorded the program's first-ever NCAA playoff appearance and victory by downing Long Island University Post in the first round of the 2014 Division II Championships. Scott earned CIAA Coach of the Year honors following his second season in Petersburg

In 2013, he was voted the Virginia Sports Information Directors (VaSID) College Division State Co-Coach of the Year and the Touchdown Club of Richmond's state Division II/III Coach of the Year after guiding the Trojans to a 9-1 overall record and perfect 7-0 CIAA ledger. Virginia State also attained a Top 25 ranking in the American Football Coaches Association (AFCA) weekly poll, another team first.

When Scott was named to lead Richmond's program at the age of 34 in 2010, he was youngest head coach at the NCAA Division I level at the time of his hire. The Spiders posted a 6-5 mark that season and produced seven All-Colonial Athletic Association performers.

As a receivers coach in both of his FBS stints with the Volunteers (Denarius Moore) and Cavaliers (Kris Burd), Scott tutored pass catchers who would go on to sign NFL contracts. As assistant head coach, recruiting coordinator and receivers coach at Richmond, Scott played a key role in the Spiders' collective 26-12 record and two FCS playoff appearances, including a national semifinal showing in 2007.

A three-year starter at tight end during his playing days at Hampton University, Scott played on one CIAA championship team and contributed to two additional MEAC titles and NCAA Division I-AA playoff appearances for the Pirates. The Sports View All-America pick also competed in the Gridiron All-Star Classic in Orlando following his senior season in 1998.

Scott, a native of Richmond, graduated from Hampton with a bachelor's degree in sports management in 1999. He attended Lee-Davis High School in Mechanicsville and Fork Union during his prep years.

He is married to the former Brandi Bradby of New Kent, Va. The couple has one son, Chase Latrell.