Poll: NC Voters Favor Right-to-Work and Limits on Government Spending | Beaufort County Now | 55% of N.C. voters think the nation is headed in the wrong direction, while 39% think we are on the right path.

Published: Saturday, May 22nd, 2021 @ 12:21 pm
By: Carolina Journal   ( More Entries )
Publisher's Note: This post appears here courtesy of the Carolina Journal. The author of this post is Donna King. 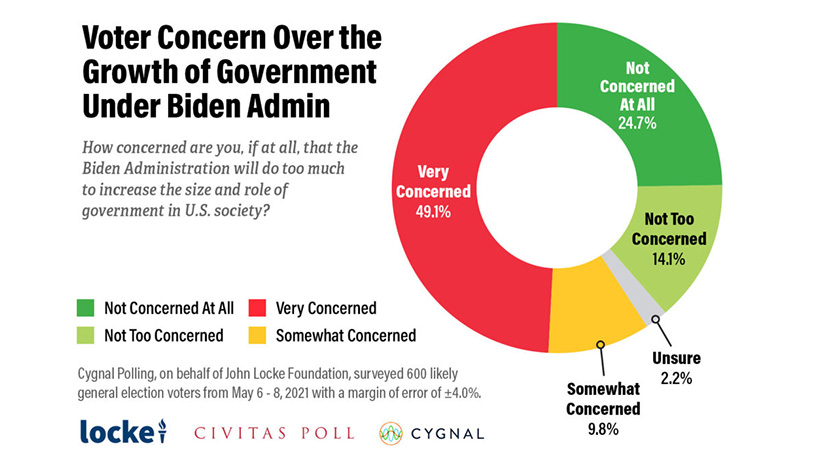 A Civitas poll out Thursday, May 13, finds North Carolina voters are growing sightly in their support for Republicans in the N.C. legislature, and decreasing slightly in their support of legislative Democrats. If the election were held today, 48% of those polled said they would support the Republican candidate, up from 46 % in March. Of the respondents, 44% said they would support Democrats, down from 46% in March.

"We don't know what our congressional or even state legislative districts will look like," said Dr. Chris Cooper, a political science professor at Western Carolina University. "So it's interesting to me the large number of people who were willing to answer this when we don't even know what our choices are going to be. It highlights the partisanship and nationalization of American politics."

Gov. Roy Cooper's job approval rating improved since March, when 49% of respondents approved of his performance and 46% disapproved. In the May poll, 53% approved and 41% disapproved.

"What you see in the difference between the March poll and the May poll is that he reopened schools," said Donald Bryson, president of the John Locke Foundation in a Facebook Live analysis of the poll results on Thursday. "That probably accounts for the bump because he was on the edge and previously we had a plurality of people who disapproved of how he handled schools."

The poll also showed that a growing number of North Carolina voters believe that the country is on the wrong track. The poll showed that 55% of voters think the nation is headed in the wrong direction, compared to 52% who thought so in March. This month, 39% of voters believe we are on the right track, a decrease from the 42% who thought so in March.

The increasing size and scope of the federal government appear to be one of the reasons approval is sliding. The response shows increasing worry from voters about federal growth under the Biden administration, even among Democrats. Overall, nearly six in 10 people said they are worried about President Biden and his administration's initiatives increase the scope and size of the federal government.

Older voters in the poll were more likely to be alarmed by a bigger federal government, 57% to 67% of those older than 35, but the younger voters were worried as well. Among voters 18 to 34 years old, 33% were concerned that big government was getting bigger since the Biden administration took over the White House.

"The fact that a majority of likely voters are concerned that the Biden administration will do too much to increase the size of government in the U.S. likely has a cooling effect on his job approval," said Bryson.

Overall, Biden's approval numbers were split among voters but faltering. About 48% of voters approve of the president, while 49% disapprove. However, in dicing the numbers further, the trend is down. Strong approval dropped 12 points since March, sitting at 33% now.

When asked whether they would support a constitutional amendment ensuring that the "right of persons to work shall not be denied or abridged because of membership or non-membership in a labor organization," nearly two-thirds of voters agreed (64%).

In April, Sens. Carl Ford, R-Rowan, and Jim Burgin, R-Harnett, introduced Senate Bill 624, a proposed constitutional amendment that would guarantee N.C. workers would not be forced to join a labor union or pay union dues as a condition of employment. Workers also could not be forced to remain apart from a union as a condition of employment. In North Carolina, proposed constitutional amendments must pass with three-fifths majorities in both chambers of the General Assembly.

Across the nation, 27 states have right-to-work laws, primarily in the South and Midwest. In other states, companies and labor unions can enter into contracts requiring employees to join the union or at least pay union dues. The National Right to Work Legal Defense Foundation estimates that such arrangements, known as a "closed shop" and allowed under federal law, siphon off $4.5 billion in employee pay each year.

Also in the poll, another constitutional amendment, a Taxpayer Bill of Rights, was widely supported among the respondents, with 56% of voters saying that they would vote in favor of a ballot measure that puts a formula in place to cap state government spending.

A bill proposing a Taxpayer Bill of Rights constitutional amendment, Senate Bill 717, was also filed in the N.C. Senate in April. The measure, if approved by voters in the 2022 election, would limit government spending growth not to exceed the combined rate of inflation plus population growth.

"Support for a Taxpayer Bill of Rights in the state constitution is strong across the state, but especially in the Charlotte media market, at 62%," said Bryson. "We also see support spike above 60% among men, 50-to-64-year-olds, conservatives, and low-propensity voters. This amendment would be difficult to defeat on the ballot."

Legislative crossover was Thursday, but the two constitutional amendments are not bound by the deadline. They are currently under consideration by the Committee on Rules and Operations of the Senate.