Class of 2021 Walks Across the Stage To Celebrate Graduation | Eastern North Carolina Now | Beaufort County Community College held its commencement exercise for its graduating students on May 13.

Class of 2021 Walks Across the Stage To Celebrate Graduation 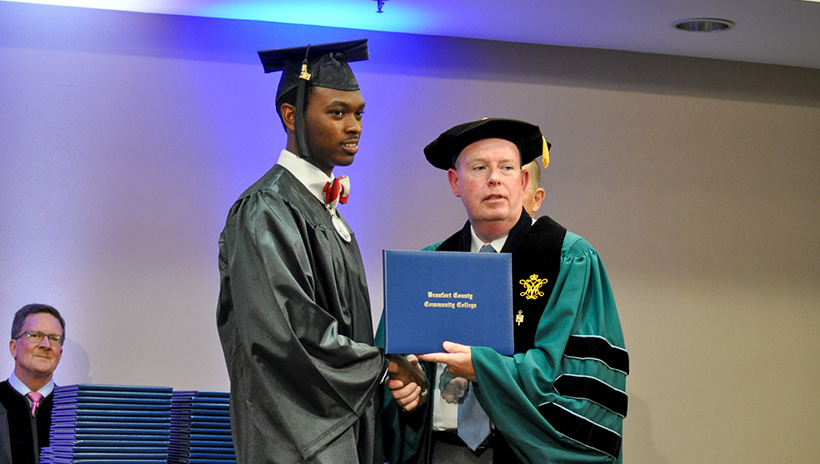 WASHINGTON, N.C.     Beaufort County Community College held its commencement exercise for its graduating students on May 13. The Class of 2021 saw 258 students able to walk across the stage to receive their degree or degrees. The 54th commencement exercise was a shift back to normalcy after the 2020 ceremony was held as a drive-through parade. The ceremony was broadcast live for family and friends to watch at home.

BCCC welcomed Patrick Woodie, president of the NC Rural Center, as its commencement speaker. Woodie graduated from the Wake Forest University School of Law in 1990, after which he spent almost a decade leading the Alleghany County Chamber of Commerce in his hometown of Sparta. Woodie then became the first executive director of New River Community Partners, leading a river basin-wide sustainable economic development plan across northwestern North Carolina, southwestern Virginia and southern West Virginia. One of the projects he led through the organization was the creation of the Blue Ridge Business Development Center, a state-of-the-art technology and education center in a renovated textile plant. Woodie started with the NC Rural Center in 2006 and was named president in 2013, leading the organization through a major transition.

Woodie spoke about some of the hurdles facing rural communities across North Carolina, including aging and losing new residents to faster growing urban centers.

"We believe the changing landscape of rural North Carolina brings with it significant challenges, but we also believe in the resiliency of our state's rural people and their dedicated stewardship of the communities they call home," said Woodie. The NC Rural Center named Washington, N.C. the Rural Small Town of the Year in 2019.

He listed the drivers of rural North Carolina's future. The speed of change, both in terms of technology and population, threatens to leave rural communities behind, but how they adapt should not sacrifice the organic relationships of rural life. The second driver, climate change, threatens communities, especially ones in low-lying coastal areas such as the four counties of BCCC's service region and will have more of an impact on already economically vulnerable communities. The third driver, growing diversity in younger populations is not reflected in power structures and this can lead to growing tensions. The final driver is racism and discrimination, which harms all communities by denying the opportunity of community members to participate wholly.

"Economically successful communities, whether rural or urban, are diverse in endless ways, but they share one common trait: they are welcoming places that tap the potential and passion of every person that wants to contribute. To grow, to thrive and to be globally competitive, rural North Carolina and its leaders, both existing and emerging, must see, must celebrate, must embrace this diversity," said Woodie.

BCCC wishes all the best to the departing students and hopes that they return to share their success stories with their former instructors.