NCAE and the Untold Story | Beaufort County Now | I recently blogged on how NCAE’s membership — the state affiliate of the National Education Association — continues to slide.

NCAE and the Untold Story

I recently blogged on how NCAE's membership — the state affiliate of the National Education Association — continues to slide. While that's important — it's a topic I've been talking about for over a decade — it's even more important to give the decline some historical perspective.

The chart below provides NCAE membership for years 2010–11 to 2019–20. No, I'm not cherry picking. I couldn't readily find the data for 2009–10 and the data for 2020–21 is not yet available. The chart includes NCAE active members, defined as employed teachers, professionals and education support professionals. 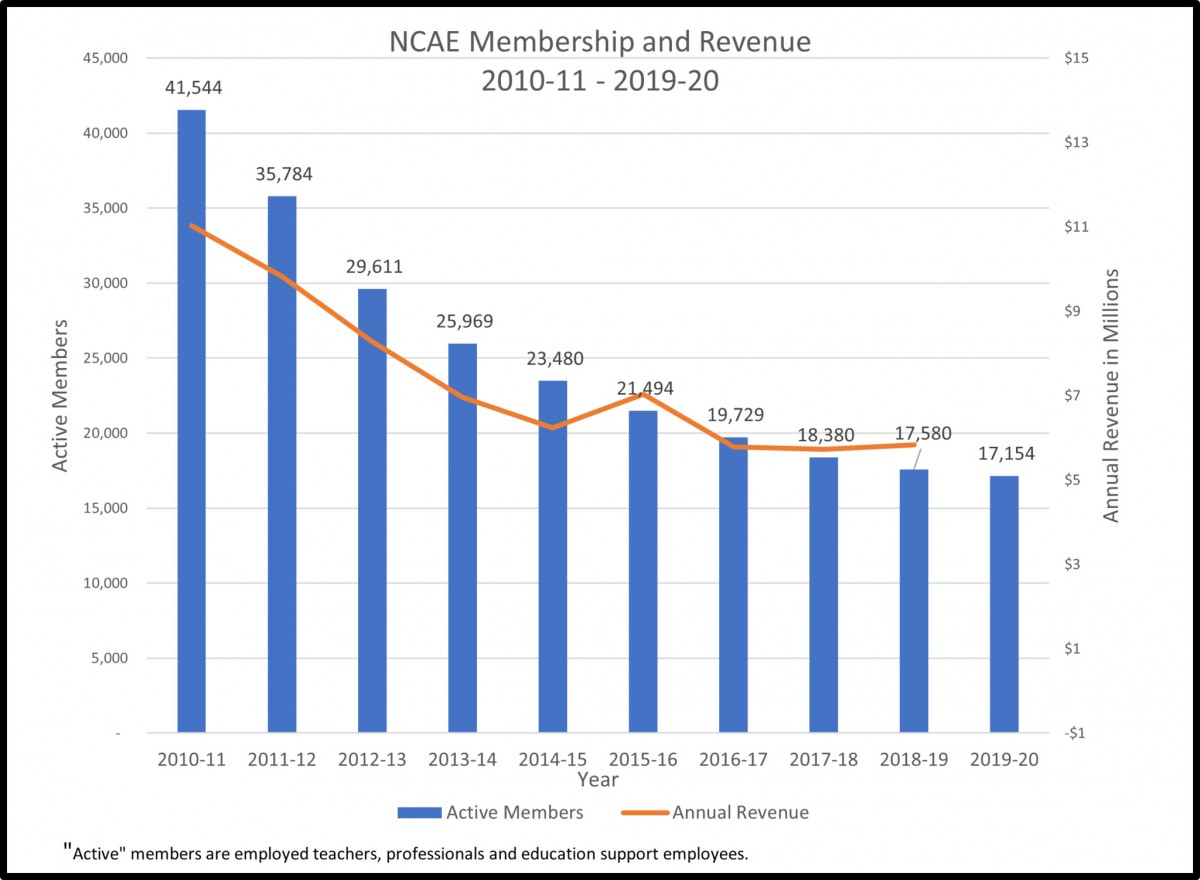 Over the last decade NCAE has had some of the most significant membership and revenue declines of any state affiliate.

But if you lived in North Carolina, you certainly wouldn't know that thousands of teachers were saying no to NCAE and NEA.

In 2018 and 2019, NCAE has led massive Red4Ed rallies in downtown Raleigh to march for higher salaries, advocate for legislative agenda and recruit new member members. Estimates for the 2018 rally put attendees in the 15,000–20,000 range.

Nevertheless, according to the chart, NCAE received no bump in membership out of either rally.

NEA, NCAE's parent organization, held its national meeting last week where it approved a raft of resolutions condemning white supremacy and American oppression and calling for the implementation of culturally responsive education, critical race theory and ethnic studies curriculum in pre-K–12 and higher education. Representatives now return to the states where they can advocate for these policies parents and much of the public already deeply oppose.

For all articles on NCAE, teacher pay, teacher rallies, and potential teacher strikes, you have to work pretty hard to ignore NCAE's shrinking membership. The media in most of our major markets have succeeded in doing that.

In increasing numbers, teachers are saying no to NEA and turning a deaf ear. A lot of parents have similar thoughts. The Left won't tell you the story of why teachers are rejecting the radical policies of the NEA, but that's precisely why the story must be told.
Go Back