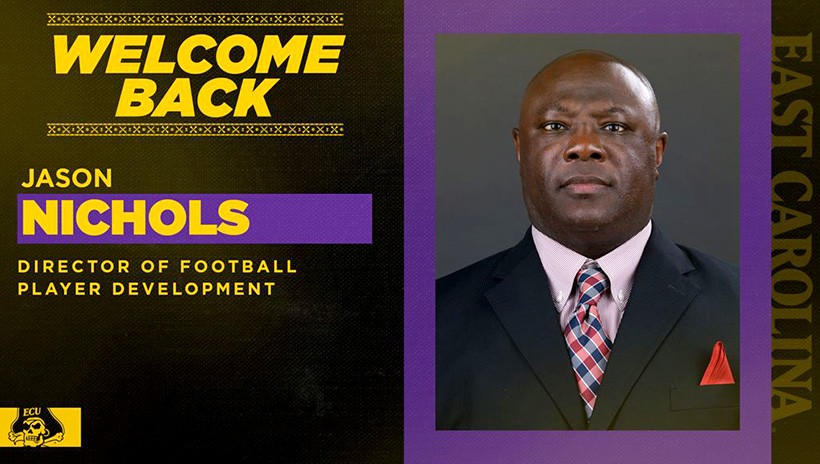 GREENVILLE, N.C.     Former Pirate record-setting receiver and assistant coach Jason Nichols has returned to the East Carolina University campus as director of football player development according to an announcement from head coach Mike Houston on Thursday.

Nichols, who followed his playing career with 19 years of full-time coaching experience, most recently was running backs coach at Richmond in 2020 after serving two years in a similar capacity at his alma mater during the 2017 and 2018 campaigns.

"To have someone in this position who not only can offer an unparalleled skillset to help develop the young men in our program, but to combine that with Jason's first-hand experience as a Pirate is immeasurable," Houston said. "He is passionate about East Carolina, understands our culture and has impacted many lives during his coaching career. I am confident his communication with our players will certainly resonate as both meaningful and compelling."

During his two-year coaching assignment in Greenville, Nichols developed a pair of young rushers — sophomore Hussein Howe and freshman Darius Pinnix — who quickly became the foundation of the Pirates' ground attack in 2017. His corps followed up a year later by complementing first-year starting quarterback Holton Ahlers as the offensive unit established a ECU single-season record by averaging 82.9 plays per contest.

From 2010 to 2015, Nichols coached Louisiana-Monroe wide receivers and served as passing game coordinator during his final year with the Sun Belt Conference member. His receiving corps flourished as five players garnered All-Sun Belt accolades during his six-year stay. The Warhawks' pass catchers consistently ranked among SBC leaders, and in 2014, ULM was one of just six teams nationally to feature two receivers with 70-plus receptions. He also played an integral role on specials teams by coordinating a kickoff return unit that ranked among the FBS's Top 10 and featured All-America performer Luther Ambrose in 2011.

Additionally, Nichols was recognized as the best recruiter at the mid-major level by Rivals.com in 2013.

Prior to his move to ULM, Nichols was a part of two Mid-American Conference coaching staffs in Ohio. He was on the Kent State sideline from 2005 to 2008 before joining the Toledo staff in 2009. While with the Golden Flashes, Nichols helped orchestrate one of the biggest turnarounds in college football in 2006, guiding a one-win 2005 squad to a six-victory season a year later. He also left his mark on the Toledo program in just one season, assisting a pair of Rockets eclipse the 1,000-yard receiving mark and earn All-MAC honors in 2009.

Nichols' first full-time coaching position was at Sacred Heart (Conn.), where he coached Football Gazette's I-AA Mid-Major Receiver of the Year and I-AA Mid-Major All-America honoree Deveron Johnson. Johnson became the first player drafted out of the Northeast Conference (NEC) after he was taken by the Dallas Cowboys in the sixth round of the 2002 draft. Nichols also helped the Pioneers to a NEC title, an ECAC Bowl win and Mid-Major National Championship after an 11-0 mark in 2001.

During the course of his career, Nichols was selected to participate in two prestigious NFL Summer Internships. He worked with the Pittsburgh Steelers' offensive staff in 2004 and the Jacksonville Jaguars' wide receivers and special teams in 2010.

Nichols started 44 of 46 contests at flanker during his four-year playing career at East Carolina from 1994 to 1997, helping coach Steve Logan and the Pirates to back-to-back St. Jude Liberty Bowl appearances.

Although he held ECU's career receptions record for 13 years, he currently ranks fifth on the list with 152, while also recording 1,557 receiving yards and nine touchdowns. As a senior in 1997, Nichols made 44 grabs for 346 yards, which followed a personal single-season best 502 yards in 1995. He also served as the program's top punt return specialist as a freshman, sophomore and junior, racking up a combined 270 yards on 43 returns.

After earning his bachelor's degree in business education from East Carolina in 1998, Nichols signed as a free agent with the Canadian Football League's Hamilton Tiger-Cats and later played for the Carolina Cobras in the Arena Football League in 2000 before initiating his coaching career as a graduate assistant at ECU in the spring of 2001.

Nichols, 46, is married to the former Nikki Howard and the couple have two children — Jayden and Amaya.
Go Back