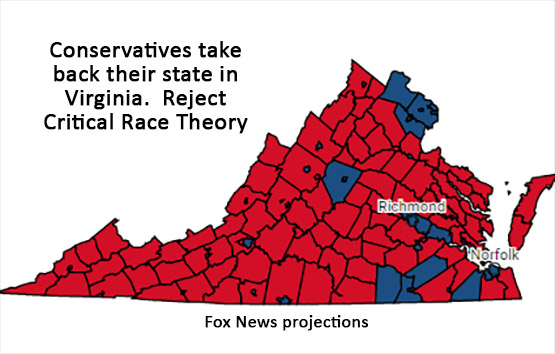 Meanwhile, by 9pm Eastern, none of mainstream media has called the race. It’s reminiscent of the 2020 election when close races that leaned towards Joe Biden were called early while close races for Donald Trump weren’t called until much later, giving the cheaters enough time to steal the election without anyone in mainstream media being too embarrassed.

This time, it seems like Terry McAuliffe was simply too McAwful for even the cheaters to fix it.

Much of the credit is being given to Youngkin’s stance on education, or to be more accurate, McAuliffe’s unpopular stance. In the last days ahead of the election, McAuliffe’s team tried to distance him from Critical Race Theory and school board control over education, but the damage was done by his early bearhug embrace of both.

Liz Wheeler posted, “This is what happens when the left tries to turn kids into transgender racists & tells parents to mind their own business or be called domestic terrorists. YOU LOSE, MARXISTS.’

Christopher Rufo posted, “Glenn Youngkin made critical race theory the closing argument to his campaign and dominated in blue Virginia. We are building the most sophisticated political movement in America—and we have just begun.”

On top of the education issues, McAuliffe was also thrown into scandal after scandal, including the ridiculous attempt by the Lincoln Project to paint Youngkin as a racist.

This appears to be a crystal clear referendum against both statewide and national Democrats. Joe Biden and Kamala Harris traveled to Virginia to campaign for McAuliffe to no avail. And even as mainstream media tried their best to prop him up, the radical agenda of the left continued to shine through.

Is this a bellwether for the 2022 midterm elections? Is Virginia starting the “red wave” that should be sweeping across the nation right now? We will see. In the meantime, Republicans should enjoy this victory.