High school sports reform bill headed to governor | Beaufort County Now | The N.C. legislature passed the Accountability and Fair Play in Athletics on Wednesday, Nov. 17. The conference report for this bill is one of several policy measures working its way quickly through committees as lawmakers look to wrap up a drawn-out legislative session.

Published: Sunday, December 5th, 2021 @ 4:29 am
By: Carolina Journal   ( More Entries )
Publisher's Note: This post appears here courtesy of the Carolina Journal. The authors of this post are Donna King. and Dallas Woodhouse.. 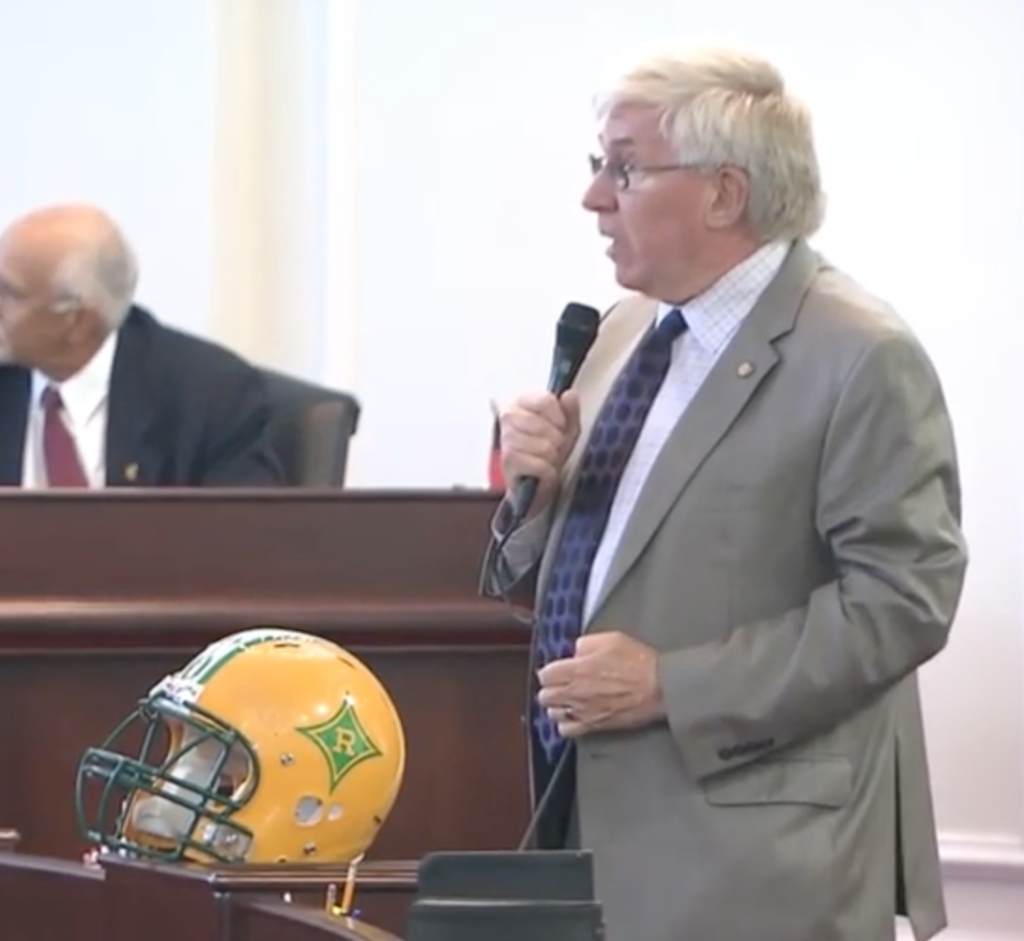 Sen. Tom McInnis, R-Richmond, speaks on H.B. 91 on the floor of the N.C. Senate September 8, 2021. Image from ncleg.gov livestream


The N.C. legislature passed the Accountability and Fair Play in Athletics on Wednesday, Nov. 17. The conference report for this bill is one of several policy measures working its way quickly through committees as lawmakers look to wrap up a drawn-out legislative session.

House Bill 91 is an effort to reform the management of high school sports in North Carolina amid controversy surrounding the governing body, the N.C. High School Athletics Association. The Senate gave their final approval to the measure earlier Wednesday, 41-7. The Senate's seven "no" votes were all Democrats.

Rep. John Bell, R-Wayne, is the House majority leader and carried the bill in the House, where it passed 71-43. Back in September, one of the original bill sponsors argued for it by carrying a Richmond County High School football helmet onto the Senate floor.

"This helmet represents each one of our student-athletes in North Carolina, said Sen. Tom McInnis, R-Richmond. "This is about the student-athletes. This is about the poor kids I represent down in Anson County. The Friday night lights are what they live for. The Friday night lights are the reason they are in school to begin with, otherwise, they may be on another path that would be less than stellar for their future."

Under the new law, the NCHSAA would continue to regulate high school sports in North Carolina, but only if it agrees to a list of reforms. The reforms would be cemented in a binding contract, with the State Board of Education. The organization has vocally opposed the legislation.

Carolina Journal has been reporting for months on efforts to reform high school sports. CJ wrote in-depth about how we got here, and it was not just because the NCHSAA has amassed $41 million dollars in assets.

Among the required reforms, the NCHSAA would not be able to adopt new rules without first posting the proposed rules on its website and allowing time for public comment. The association would also have to comply with open meetings laws and public records laws. The organization would also now be audited by the state.

Members of the board of directors for the NCHSAA would have to adopt ethics policies requiring them to avoid conflicts of interest and the appearance of impropriety and must ensure that board membership reflects equal representation from each education district.

The NCHSAA would have to lessen the financial burden on its member schools. Annual fees to schools would be reduced by 20%, and NCHSAA could not collect more than a third of net profits from any state tournament game. The organization's handbook, rules, and appeals process NCHSAA would be required to make publicly available at no cost.

Charter and non-public schools can continue participating in the NCHSAA, but they would be bumped up a classification. This provision is a huge sigh of relief for the four private schools that are members of the NCHSAA, Bishop McGuinness, Cardinal Gibbons, Charlotte Catholic, and Christ the King. Those schools would have been prevented from participating in the new public-school league in the original legislation. The NCHSAA would be forced to scrap a newly created formula for determining classifications and return to basing classification solely on the number of students at each school.

More rules and reforms included in the measure are available here, most notably that the NCHSAA will no longer be allowed to issue fines to high schools for rules violations.

Opponents of the measure called it unnecessary.

"This bill is attempting to fix a problem that doesn't exist, the North Carolina High School Athletic Association has been in existence since 1912," said Rep. Raymond Smith, D-Wayne, on the House floor Wednesday. "Why are we interfering in the last amateur sports we have in North Carolina?"

Following passage in both legislative chambers, the bill moves to Gov. Roy Cooper for a signature or veto. Cooper could also let the bill sit for 10 days, after which point it would become law without his action.
Go Back