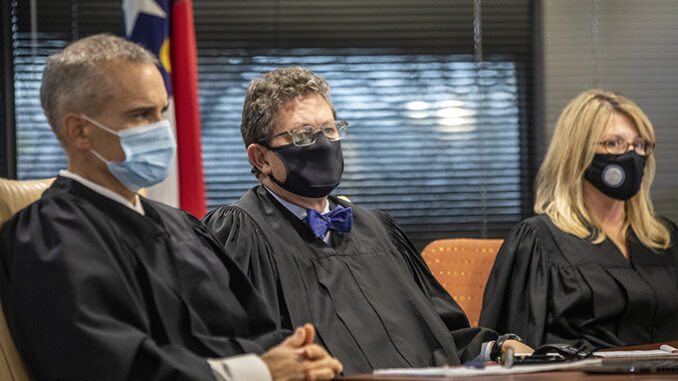 The North State Journal.com   is reporting:

In a unanimous decision, the panel denied the plaintiffs’ claims that the new lines violated state law. The judges were on a fast timeline following the trial order from the state Supreme Court in December. The plaintiffs are expected to appeal the decision to the state’s highest court.

“At the end of the day, after carefully and fully conducting our analysis, it is clear that plaintiffs’ claims must fail,” the judges said in part of the ruling.

State Sen. Warren Daniel (R-Burke), who co-chairs the Senate Redistricting Committee, said, “Now that a bipartisan court unanimously validated the maps, the people of our state should be able to move on with the 2022 electoral process.
North Carolina Republican Party chairman Michael Whatley said, “I am pleased to see that the Superior Court panel has affirmed the maps drawn by the General Assembly following a fair and transparent process – and hope the N.C. Supreme Court will uphold this decision,” in a statement.
His Democratic counterpart, Bobbie Richardson, expressed disappointment and encouraged the four Democrats on the state Supreme Court to overturn the decision.
“The evidence presented demonstrates that Republicans lied to their colleagues when they promised a fair and transparent redistricting process. They cheated by using secret maps and closed door strategy sessions, then destroyed the maps they used. They are trying to steal seats through illegal partisan gerrymandering and are choosing to proceed with costly litigation that hardworking taxpayers will pay for. This is not the end of the fight for fair and transparent maps that reflect the diversity of our state,” part of her statement read.
The court ruling also set the candidate filing period to resume on Feb. 24.

This is a developing story and will be updated.