ECU Tops Cincinnati In Series Opener, 9-7 | Beaufort County Now | Carter Spivey allowed one run over 4.1 innings of relief, while his offense banged out 12 hits leading East Carolina to a 9-7 win over Cincinnati Friday night at Lewis Field inside Clark-LeClair Stadium. 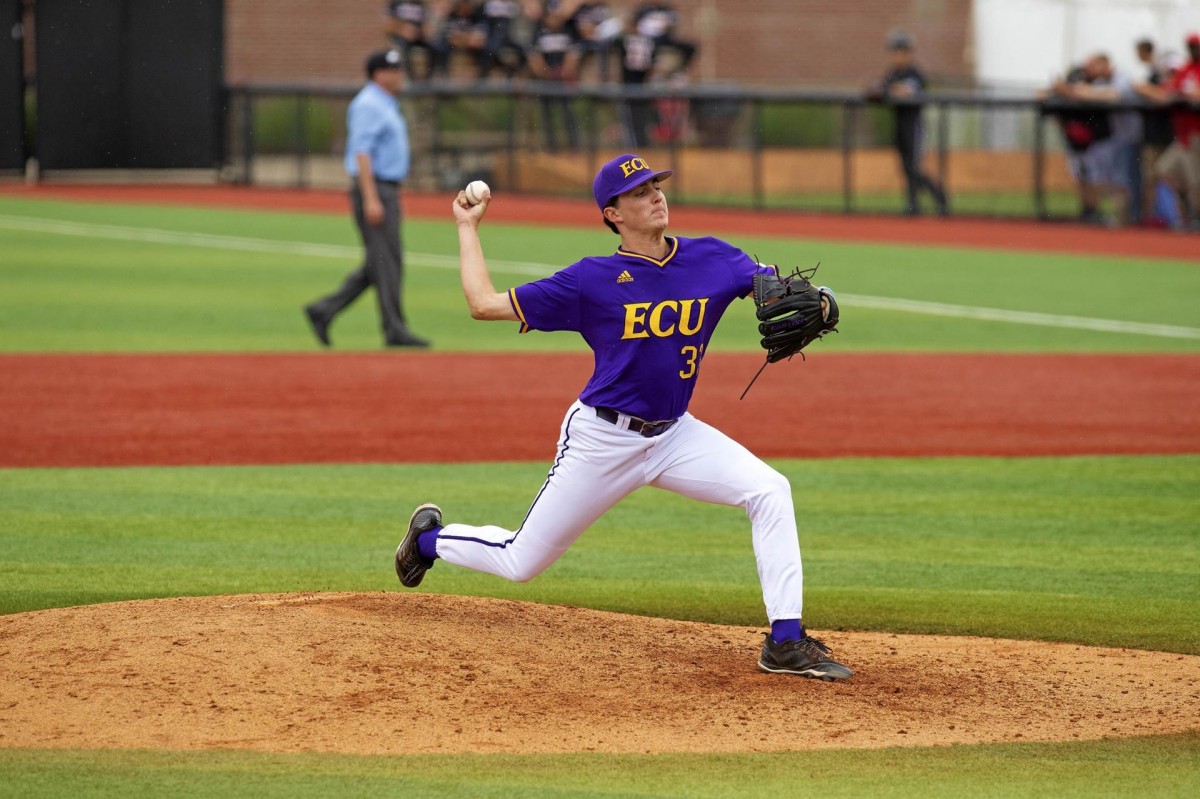 GREENVILLE, N.C.     Carter Spivey allowed one run over 4.1 innings of relief, while his offense banged out 12 hits leading East Carolina to a 9-7 win over Cincinnati Friday night at Lewis Field inside Clark-LeClair Stadium. With the win the Pirates improve to 25-18 over and 9-4 in American Athletic Conference play and the Bearcats drop to 17-22 and 7-6.

Trailing 6-5 going to the bottom of the fifth inning, ECU scored a pair of runs retaking the lead at 7-6. With one away, Bryson Worrell singled up the middle and took second on when Ben Newton was hit by a pitch. Alec Markarewicz followed with a fly ball out to right-center where Worrell tagged up and then scored on the second error of the contest by Wyatt Stapp on the relay throw in knotting the game at six-all. After Cam Clonch put runners on first and second with a single through the right side, Josh Moylan registered his third hit on the night singling home Newton with another shot through the right side.

Spivey (4-0) earned the win in relief giving up the lone run in the ninth inning. The right-hander scattered four hits over 4.1 frames with a walk and four punch outs. Starter Ryder Giles allowed four runs (all earned) on six hits with a pair of strikeouts in 2.2 innings before passing the ball off to Garrett Saylor in the third. Saylor surrendered a pair of runs (both earned) on three hits with four punch outs in two innings of work.

Beau Keathley (3-2) suffered the loss after he was touched for seven runs (six earned) on 10 hits with two walks and three strikeouts in five innings. Max Bergmann gave up two runs (both earned) on two hits with three strikeouts and one walk in two stanzas, while Jackson Murphy tossed a scoreless eighth frame.

Cincinnati wasted little time getting on the board as it pushed across four runs in the top of the first inning for a 4-0 lead. Paul Komistek and Joe Powell each laced singles and came around to score on Ryan Nicholson's two-RBI double. After the second out in the frame, Kerrington Cross belted his fifth home run of the year with a two-run shot to left field.

The Pirates responded with a run in the home half of the first cutting the Bearcats lead to three, 3-1. Zach Agnos and Lane Hoover started the frame with consecutive single before Jacob Jenkins-Cowart plated Agnos on a double-play ball.

ECU took its first lead of the ball game in the fourth after posting four runs on three hits for a 5-4 advantage. Makarewicz drew a one-out walk and took second on Clonch's single through the right side. Moylan picked up his second hit of the evening with a RBI single through the right side plating Makarewicz. Jacob Starling followed with an RBI single to second coupled with a throwing error on the play by Stapp. After taking third on a passed ball, Agnos' sac fly to right field scored Starling for the final run of the stanza.

Stapp's bases loaded infield single in the fifth gave the Bearcats a 6-5 lead. Komistek led off the frame with a solo blast to left field tying the game at five all. Griffin Merritt singled with one out, Cole Harting singled to left with two away and Cross loaded the bases with a walk, setting up Stapp's RBI base hit.

Makarewicz' two-run no-doubt home run in the seventh extended the Pirates lead to three, 9-6. Newton laced a one-out single and came around to score on Makarewicz' eight home run of the year.

Griffin Merritt's 16th home run of the season, a solo blast to left field, pulled the Bearcats within two, 9-7, in the ninth inning.

Eight of the Pirates starting nine tallied at least one hit while all nine reached base at least once. Moylan led the club with three hits and drove in a pair. Agnos and Clonch each added two hits, while Makarewicz plated a pair on his eighth home run of the season.

Both teams will be back in action on Saturday, April 30 with a 4 p.m. (ET) scheduled first pitch and will be streamed on ESPN+.
Go Back