SCOTUS rules in favor of parents who choose to send their children to a religious school | Beaufort County Now | This could be a major step toward allowing government money to flow directly to parents to enable them to homeschool their children. 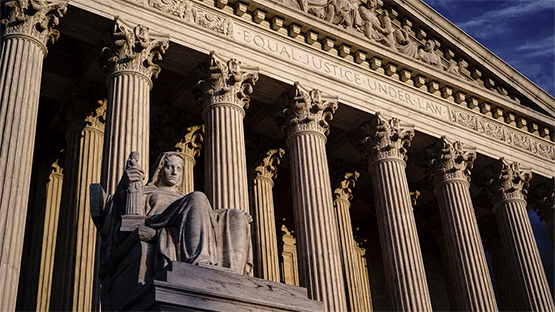 The program provides tuition assistance for students without a local public school to attend private institutions – as long as the funding is not used for religious or "sectarian" teaching.

"Maine’s ‘nonsectarian’ requirement for its otherwise generally available tuition assistance payments violates the Free Exercise Clause of the First Amendment," Chief Justice John Roberts wrote in the court's opinion in the case of Carson v. Maykin. "Regardless of how the benefit and restriction are described, the program operates to identify and exclude otherwise eligible schools on the basis of their religious exercise."

Roberts stated that with Maine providing the benefit of tuition assistance, they cannot condition those benefits in a way that "effectively penalizes the free exercise of religion."

Religious schools were allowed under the program before 1981, but then Maine adopted its "non-sectarian" requirement, citing the First Amendment. Roberts noted that this addition was made after Maine’s attorney general determined that funding private religious schools would violate the First Amendment’s Establishment Clause. The Supreme Court ruled in 2002 that a program where private citizens made the decision as to where the money was going would not violate the clause.

The Supreme Court made that same determination on Tuesday.

"[A] neutral benefit program in which public funds flow to religious organizations through the independent choices of private benefit recipients does not offend the Establishment Clause," Roberts wrote.

A lower court ruling in Maine's favor had said that the real benefit was not tuition assistance, but the provision of the "rough equivalent of the public school education that Maine may permissible require to be secular."

Roberts rejected that argument, noting that "the statute does not say anything like that."

What the statute does say is that a school administrative unit that does not have its own high school "shall pay the tuition . . . at the public school or the approved private school of the parent’s choice at which the student is accepted."

"The benefit is tuition at a public or private school, selected by the parent, with no suggestion that the ‘private school’ must somehow provide a ‘public’ education," Roberts wrote.

In a dissenting opinion, Justice Stephen Breyer wrote that the majority is now requiring Maine to fund religious schools, and this runs afoul of the First Amendment. Roberts said in his majority opinion that this was "wrong," because "Maine chose to allow some parents to direct state tuition payments to private schools; that decision was not ‘forced upon’ it."

Breyer also warned that this could lead to future problems.

"This is a situation ripe for conflict, as it forces Maine into the position of evaluating the adequacy or appropriateness of the schools’ religiously inspired curriculum," Breyer wrote, adding that "Maine does not want this role," and that schools do not "want Maine in this role" either.

"By invalidating the nonsectarian requirement, the majority today subjects the State, the schools, and the people of Maine to social conflict of a kind that they, and the Religion Clauses, sought to prevent," Breyer wrote.

In a separate dissent, Justice Sonia Sotomayor claimed that with this case, the Supreme Court "continues to dismantle the wall of separation between church and state that the Framers fought to build."

Sotomayor pointed to other cases from recent years in which the Supreme Court had ruled that school vouchers or other state funding could go toward religious institutions, expressing "growing concern for where this Court will lead us next[.]"