US Senate candidate Cheri Beasley's pleas for more funding have been heard, as the National Democrats have given her a flood of new funding going into October. 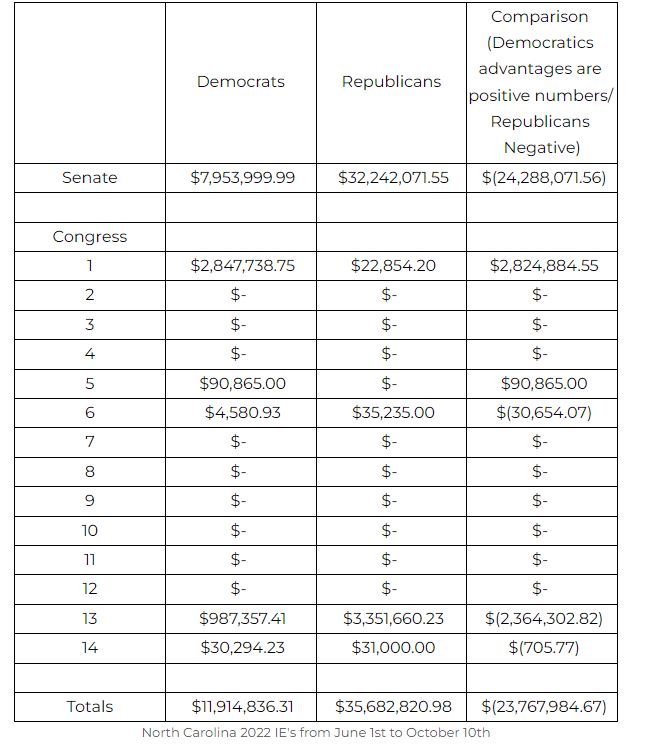 Democrats have moved a significant amount of funds into Congressional District 1 (CD-1) for State Senator Don Davis, injecting nearly $3 million into the race over the last few weeks. CD-1 is considered a lean Democrat seat, with a score of D+5 on the Locke Foundations Congressional District rankings. This is a substantial investment for Democrats for a seat in the northeastern part of the state they have long held.

Democrat Willey Nickle does not seem to be getting the same investment as his competitor for CD-1 . Nickle is running against Bo Hines in CD-13, North Carolina's only toss-up congressional district.

The Democrat investment strategy of spending more money in CD-1 over CD-13 is noteworthy given the partisan leanings of the districts. This could indicate Democrats either believe urban get-out-the-vote efforts from progressive nonprofits will help get Nickel over the finish line in his D+1 district or that this race is a long shot for him given the generic congressional polling of the state.

In the Locke Foundation's most recent poll, Republicans hold a 3-point advantage in the generic congressional ballot. Coupled with Budd leading Beasley throughout the eastern part of the state, that could have Democrats concerned that Davis could lose Congressman G.K Butterfield's long-held Democrat seat this November.
Go Back