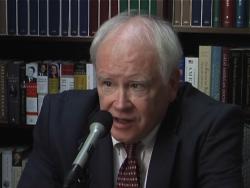 Richard Vedder
RALEIGH  -  People of all political persuasions have identified significant problems plaguing the American system of higher education. President Obama outlined some reform ideas during a back-to-school tour of New York and Pennsylvania colleges. But Ohio University economist Richard Vedder, director of the Center for College Affordability and Productivity, believes the president's proposals fall short in some important ways. During a visit to the Triangle, Vedder discussed higher education challenges with Mitch Kokai for Carolina Journal Radio. (Click here to find a station near you or to learn about the weekly CJ Radio podcast.)

Kokai: We have heard quite a bit about this issue of what's wrong with higher ed, especially [when] the president made a big deal out of this. ... First of all, you think that some of his ideas made some sense.

Vedder: Yeah, the president said one or two very sensible things. He said we need more transparency in higher education. That is to say people should have better information about the decisions they make. I don't see how one could reasonably disagree with that. Indeed the federal government does have some data available that it could make available, such as earnings data on graduates. There's a decent argument that can be made that that should be provided. So that part of his remarks didn't bother me at all.

Kokai: But you also say that in some key respects he really misses the mark.

The government is providing fuel for an academics arms race that is going on all over the country by allowing kids to borrow huge amounts of money at very, very low interest rates, and many of these students are really not knowledgeable about finance and so forth. They go out; they borrow a lot of money. The colleges raise their fees more than they otherwise would. This provides extra income for the colleges, which goes for a ton of different things  -  luxury facilities, more administrators, higher pay for people, and the like  -  and makes college less affordable.

So the president, who is now talking, and says, "Gee, we ought to do something about this," is instead of saying, "Well, let's get to the root cause of this. Let's get"  -  the one thing he can control or Congress can control  -  "let's get rid of these programs, or let's downsize them in some fashion," instead is saying, "No, we want to keep these programs."

In fact, he went further. He says, "We want to make it easier for the kids to pay back these loans." Well, they don't really need to pay them all back. Maybe they just pay part of them back, 10 percent of their income for a few years. So, if anything, that encourages the students to borrow more, by the way.

So instead of proposing a real solution, he has proposed some threats: "If you don't do this or that, we may cut the student loan program back a bit." I don't think it's a very effective way of dealing with the problem.

Kokai: If we wanted to address some of these key problems, what should we do?

When the federal government tries to take control, which the president seems to be doing, that detracts from that. It indeed destroys that. And so I think the federal government should start thinking of allowing the states, again, to assert their control. And, of course, I even think states should perhaps start to get out of higher ed, and instead of giving money to schools give it to students in need if you want to give some money away.

Help low-income students by giving vouchers or scholarships. That would be fine. But empower individuals and provide information to individuals to make decisions. So I think the president, although his remarks may be well-intended, I can't speak to his motives, is  -  nonetheless, I think he has missed the mark.

Kokai: How much of the problem is tied into this idea that everyone needs to go to college?

Vedder: I think the ... I call it the "college-for-all" movement has been a very destructive movement in higher education. The president, and not just our president but the major foundations, like the Gates Foundation and the Lumina Foundation, are talking about how we have to have 60 percent of the people with degrees by a certain year. I think this is very destructive. We've almost created the notion that if you haven't gone to college, you're a failure in life. You are sort of a lower form of humanity.

And so guidance counselors impress on us that you must go to college. Well, not everyone has the ability to do what is truly rigorous, high-level academic work. They just don't have the ability. Moreover, we have 100,000 janitors  -  115,000 janitors  -  in the United States with bachelor's degrees, a million retail sales clerks with bachelor's degrees.

We don't have the jobs that college graduates traditionally have filled. We still need people that do jobs that require relatively little skill, relatively little educational training, and we ignore that. And so we have a mismatch between what the labor market is saying and what the college leaders and the guidance counselors in high school and the president of the United States [are] saying. And this is causing a good bit of angst and problems for young people today.

Kokai: Your friend and ours, George Leef from the Pope Center for Higher Education Policy, has talked about college being "oversold." Is that a true statement?

Vedder: College is oversold, and I think another way of putting it is we're overinvested in college education. We need to disinvest. People talk about investing in our future. Sometimes we overinvest in our future, in the wrong ways. There are other areas, maybe, [where] we should invest.

I'm not against investment, but we are overcommitted in higher education. And as a consequence we're getting students who are not prepared for college. We're getting high dropout rates. We're getting low learning levels. We get students only working 30 hours a week, going to class or studying. We get grade inflation. I could go on and on with all sorts of the manifestations of this that have happened as a consequence of this, none of which have been particularly good for American society.

Kokai: ... Do you have a sense that because of these problems that everyone seems to see with higher education, we're going to see some major change soon?

Vedder: I think change is going to come, and it's not going to come from presidential rhetoric or even congressional action. I think markets work. Sometimes they work slowly. Sometimes they work inefficiently because of subsidies and taxes and regulations imposed on markets that distort them. But I think kids are starting to say no. Enrollments are falling. They're not rising right now in American higher ed.