Raleigh, NC     This week saw the Burr campaign release its latest TV ad that focuses on Senator Burr's legislative work to help people with disabilities receive the support that allows them to achieve their goals in life. The campaign also unveiled its "Manufacturers for Burr" leadership team, the third leadership team in as many weeks and one that is comprised on talented business leaders from all over North Carolina. Deborah Ross spent another week silent on the Iran ransom payment despite new revelations the Obama administration made additional cash payments to Iran totaling $1.3 billion. Time and time again, Ross fails to weigh in on critical national security issues facing our country and it has now been 38 days with no response from Ross on the Iran ransom payment.

On Tuesday, the Burr campaign announced its newest statewide TV ad, "ABLE Act," that featured the D'Amelios family praising Senator Burr's work to pass the ABLE Act and describing how it benefits their two children with Autism. In the ad, the D'Amelios pointed out how helpful Senator Burr's work has been for their family, and for other parents who have children with disabilities and want to save for their future. 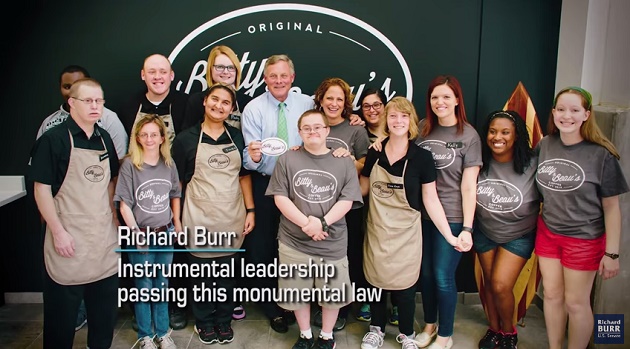 
On Wednesday, the campaign announced the "Manufacturers for Burr" leadership team and co-chair Frank Dowd IV, had this to say about Senator Burr:


In light of Wednesday's Wall Street Journal story, which detailed the additional $1.3 billion cash payment the Obama administration made to Iran, the campaign noted Deborah Ross' repeated silence after more and more details surrounding the payment were reported over a 35 day period of time.

Following up on the earlier announcement of the "Manufacturers for Burr" leadership team, the Burr campaign on Thursday highlighted a Medium post penned by one of its members, Allen Gant, the Chairman & CEO of Glen Raven. In the post, Gant discusses some of the key reasons why he's supporting Senator Burr.

Medium: The health of our economy has been at the forefront of the political discussion for some time now. Under President Obama, manufacturers, the building block of the American economy, have been stretched thin by government red tape and an antiquated tax code that makes it harder to create jobs. I've seen firsthand how Senator Burr has worked to improve the economic climate for North Carolina manufacturers and job creators. The Obama administration just completed its 600th major regulation, and it's critical that we have a senator who will help alleviate the pain caused by these burdensome mandates. North Carolina families deserve good paying jobs, and Senator Burr has been a leader every step of the way to help create those jobs.