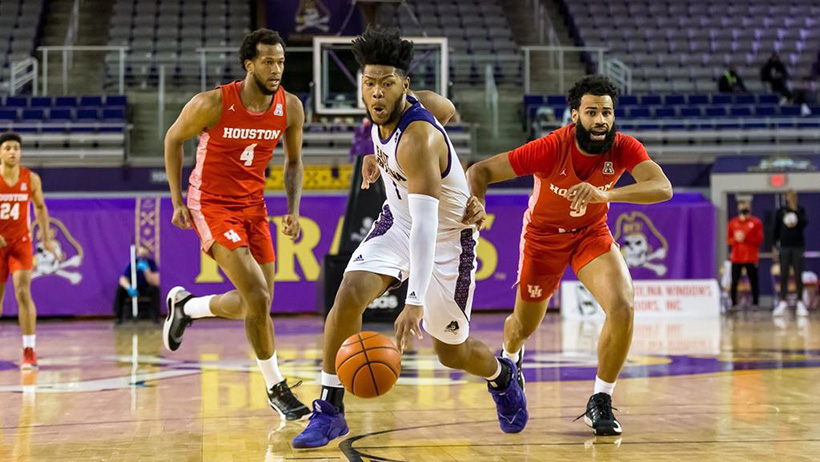 GREENVILLE, N.C. (AP)     Jayden Gardner and East Carolina didn't get to savor a sea of court-storming home fans after claiming a huge upset. Instead, the Pirates left the court in a somewhat subdued celebration — until letting loose in the locker room, that is.

"I'm out of breath," Gardner said with a smile.

Gardner had 21 points and 15 rebounds to help ECU stun fifth-ranked Houston 82-73 on Wednesday night, securing the Pirates' first win against a ranked opponent in nearly two decades. It was the Cougars' first loss of 2021, a performance that befuddled coach Kelvin Sampson.

"We just didn't look like we were playing Cougar basketball tonight," Sampson said, "in no form or fashion."

Tremont Robinson-White added 17 points for East Carolina, which defied season-long offensive struggles against one of the nation's top defensive teams. East Carolina shot 47% and made 11 of 24 3-pointers — and more impressively, the Pirates led for the last 12-plus minutes against a Houston team that struggled to make much of anything after halftime.

East Carolina (8-6, 2-6 American Athletic Conference) hadn't won a game in more than a month between five straight losses and three postponements. The Pirates were also down starting swingman Brandon Suggs to injury and lost reserve guard Tyrie Jackson during the game to an apparent leg injury.

The Pirates still found an unforgettable way to end a 33-game losing streak against AP Top 25 teams, though it came with a limited number of attendees in Minges Coliseum due to the coronavirus pandemic.

East Carolina hadn't won since beating Tulane at home on Dec. 22. The Pirates hadn't beaten a ranked team since upsetting a Dwyane Wade-led Marquette team ranked 13th in December 2002. And they were 0-14 against top-5 opponents all-time. Those skids are over.

"I think they're starting to get used to it," ECU coach Joe Dooley said. "I think it would have been nice for our fans to be share that now, I do say. ... But I've got to give the credit to kids throughout the country, the credit for lining up and doing this this year."

Houston (15-2, 10-2) came in as KenPom's No. 2-ranked defense, allowing 86 points per 100 possessions, while also ranking as one of the nation's top rebounding teams. But the Cougars didn't do much to hold down the Pirates in either category while sputtering offensively.

DeJon Jarreau matched his career high with 25 points to lead the Cougars, who had won nine straight meetings dating to 2015, including wins by double-digit margins on ECU's home floor in each of the past four seasons. But top scorer Quentin Grimes struggled to just seven points on 2-for-10 shooting.

Houston: The Cougars moved to No. 5 in Monday's latest AP Top 25, marking their second stint there this season. That's the program's highest ranking since the 1983-84 season that ended with the Hakeem Olajuwon-led Cougars reaching the NCAA title game. But they didn't get stops, made just 8 of 31 shots after halftime (25.8%) and finished with a 37-36 rebounding edge.

"Rarely do we get out-competed or other teams play harder than us," Sampson said. "We hang our hat on being tough. but we weren't any of those things tonight."

East Carolina entered averaging 67.8 points while shooting 42% from the field and 32% from 3-point range. Those numbers were even worse in league play, but they hit shots from the start while the Cougars were a step slow in closing out on shooters, in Sampson's estimation.

More important, ECU had five players in double figures to give Gardner plenty of support. Compare that to last year's meeting here, when Gardner had 29 points and 19 rebounds but no other ECU player scored more than eight in a 69-59 loss.

"That's the best win ever. Just letting that sink in that, we just beat a top-5 team in the country. That's very surreal, that's stuff you dream about — beating anybody ranked, really," Gardner said.

POSTGAME QUOTES     "It's good for the guys because they've stuck with it. It's been a rough month. We had guys in and out with injures and COVID protocol, so it's been a disjointed month for our whole team. ... I like to see the guys get rewarded because that's something they've never really experienced since they've been here." – ECU Head Coach Joe Dooley

"We've gotten better with each game that we've played. UCF, we came back and then Tulsa, we were right in there. Everything clicked tonight. It was great to see everyone step up. That's a great team win and great for our program." – Jayden Gardner

"We came into this game thinking we were going to win because we do that with every game, but when we went up by 10 — I think 67-57 — and they started fouling, we were like, 'We got this,' – Tristen Newton