The Barefoot Movement Returns to the Region

Login to Send a Private Message to Stan Deatherage
The Barefoot Movement plays at The Town Common, Sunday evening, July 29, 2012, at 7:00 pm

The Barefoot Movement returns to our region to play at the Greenville Toyota Amphitheater, Sunday evening, July 29, 2012, located along the waterfront in downtown Greenville, North Carolina, just off 1st Street at The Town Commons. This show, at 7:00 pm, by this ensemble of consummate Bluegrass musicians, is part of the Sunday in the Park Outdoor Concert Series, brought to the public by the Greenville Parks and Recreation. The price of admission to the public to hear The Barefoot Movement is no charge.

The Barefoot Movement has close ties to the region, and fortunately for local Bluegrass / Traditional Country fans, this young band of outstanding stylists in the Traditional Music genre have played often in this patch of eastern North Carolina. A little over one year ago, The Barefoot Movement played at the Turnage Theater in Washington, North Carolina, which inspired BCN contributor Wyatt Sanderman Day to assert that this young band was one of the six best musical acts to play the Turnage Theater in the previous two years.

When The Barefoot Movement performed that night at the Turnage, they had produced their first volume of music, understandably, entitled "Footwork." At that show, the group played most of that fine Compact Disc, and quite a few tunes from their new CD, which has recently been recorded, but yet to be released.

Almost a year later, when The Barefoot Movement recently performed, as the featured act, at the Music in the Streets festival, on May 18, 2012, in Washington, NC, they played all of their newly recorded tracts, and have promised to play them all again tomorrow night, July 29th, at the Sunday in the Park Outdoor Concert Series on the Greenville, N.C. Town Commons.

It is well advised from "yours truly," who never misses The Barefoot Movement when they perform regionally, that you make a fervent effort to come out for a good time this Sunday in the Park. I'll be there. I hope to see you there too. 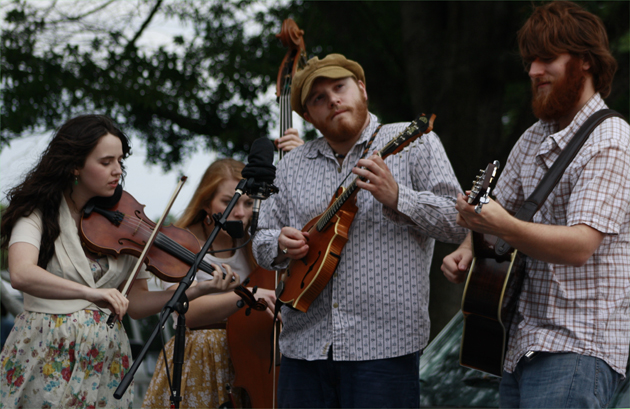 From their performance at Washington's Music in the Streets, The Barefoot Movement playing their original Bluegrass anthem "Southfork by Midnight:" (from left to right) Noah Wall- Fiddle, Hasee Ciaccio - Upright Bass, Quentin Acres - Mandolin, Tommy Norris - Acoustic 6-string Guitar: Above. Noah Wall (left) and Quentin Acres (right) usually handle all the vocalist duties, but now are getting some efficient help from Hasee Ciaccio (center): Below.     photos by Stan Deatherage 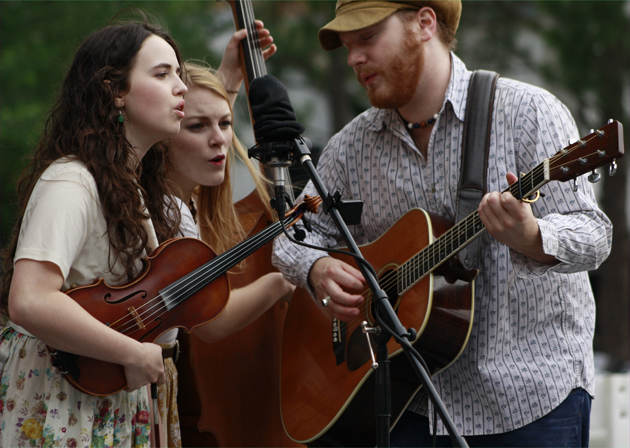