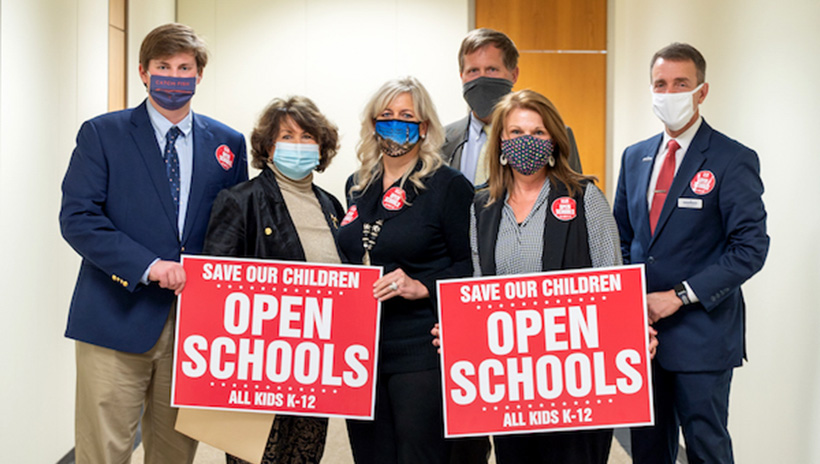 Parents in 14 North Carolina public school districts would have the option of sending their children to full-time, in-person instruction under a local bill approved by the N.C. House K-12 Education Committee on Tuesday, March 9.

The measure, House Bill 90, is designed as an end run around Gov. Roy Cooper's veto of Senate Bill 37, which would have given all school districts in the state the option of fully reopening under "Plan A." Many school districts continue to operate under "Plan B," a hybrid approach combining part-time remote with part-time in-person.

Republican lawmakers are now planning to introduce a series of local bills — which are not subject to a gubernatorial veto — to achieve the same goal, even as lawmakers and the governor negotiate on a compromise plan.

"These children are suffering," said the bill's primary sponsor, Rep. Pat McElraft, R-Carteret. "We're seeing more drug addiction, more kids in trouble, more kids failing. Their future and ours depends on them getting a good education."

Lawmakers heard from local school officials who pleaded for the option to return to in-classroom instruction. Clark Jenkins, chair of the Carteret County School Board, shared how his daughter with special needs has thrived for years in the public school system. But all that came "crashing down" in March 2020 when classrooms shuttered.

"I watched her lose her confidence, watched her cry every day," Jenkins said. "I learned she was cutting herself. Fortunately, as a dad I'm able to get involved and help her — through school, through church, and through private practice. But she represents thousands of kids across the state who don't have an involved dad, who don't have churches, who don't have counselors."

Christine Hanks, the mother of a freshman student also in Carteret schools, noted that hybrid instruction is portrayed as a good compromise. "What's being compromised is our kids' education and their health and well-being," she said. "Plan B is a Band-Aid on a gaping wound. Our local leaders know our community best. They know our educators, our students, our schools. Vote for this bill and show that you trust them as well."

During debate, Republican lawmakers noted that H.B. 90 hands decision-making authority over to local districts and ultimately to parents. "The cool thing about this bill is that it doesn't tell anyone they have to do anything," said Rep. Donny Lambeth, R-Forsyth. "It just says the local school board may reopen at their discretion. It gives them the option to do it. They know at the local level what's best for their community."

A handful of Democrats raised objections to the bill on constitutional grounds. By law, a local bill can't directly relate to health.

"This note about constitutionality should give us pause," said Rep. Graig Meyer, D-Caswell. "We have all taken an oath to uphold the constitution. At the very least this is going to land us in court. With schools already on a path to reopening and discussions on a compromise on Senate Bill 37, I don't know why we would vote on a bill that might be unconstitutional."

Republican sponsors countered that an amended version of the bill skirted any constitutional issues. H.B. 90 now heads to the House Local Government Committee.

David Bass is a freelance writer for Carolina Journal.
Go Back