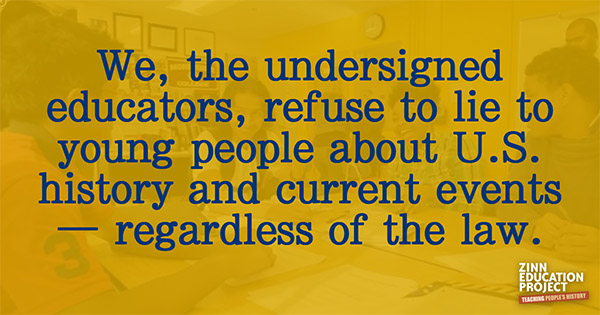 It has often been said that the curriculum our children are taught in our classrooms is what the teacher decides it will be.  "When the door closes, the teacher teaches what they want..."  It's not quite that simple, but it does illustrate a major point in this discussion about the left-wing takeover of many of our schools.  That is, the role of the teacher and principal is critical to the issue of what students will be taught.

Now thousands of teachers are boldly proclaiming that they will teach what they dang well please.  This must be stopped.

RALEIGH – One faction of Critical Race Theory (CRT) apologists swears it isn’t really in our schools; another faction of Woke teachers is pledging to defy any district or state bans on CRT and continue pushing CRT and Woke dogma in the classroom.

Confused yet? That’s understandable, but it’s probably best not to discount your lying eyes. Oh, and the throngs of teachers explicitly shouting that they have been, are currently, and will continue to push this post-modern poison of an ideology in our schools.

Thousands of teachers around the country, many strewn across North Carolina, have signed a pledge from the anti-American Zinn Education Project promising to carry forward with Woke indoctrination no matter the state law.

From the pledge text:

“[…] how can one teach honestly about the nature of our society without examining how today’s racial inequality is a systemic legacy of this country’s history?

From police violence, to the prison system, to the wealth gap, to maternal mortality rates, to housing, to education and beyond, the major institutions and systems of our country are deeply infected with anti-Blackness and its intersection with other forms of oppression. To not acknowledge this and help students understand the roots of U.S. racism is to deceive them — not educate them. This history helps students understand the roots of inequality today and gives them the tools to shape a just future. It is not just a history of oppression, but also a history of how people have organized and created coalitions across race, class, and gender. […]”

They say it right there in black and white (is that okay to say?); to them indoctrination IS education. They don’t consider it education unless they literally inculcate kids with the idea that America is fundamentally racist in its conception and systems, and, what’s more, they mean to train public school students to ‘shape a just future’ as defined by Wokies.

Just to reiterate, there is currently a building narrative that suggests CRT isn’t really in our schools at all. Someone might want to tell these teachers signing the pledge.

So far, over 4,500 teachers have publicly committed to the following:

“We, the undersigned educators, refuse to lie to young people about U.S. history and current events — regardless of the law.”

In North Carolina, a partisan State Board of Education has passed new social studies standards embracing the Woke worldview on our K-12 public schools, over the stern objections by members such as Lt. Gov. Mark Robinson and public backlash.

The N.C. House passed legislation last month banning anti-American ideological frameworks from being taught as fact in public schools. It still sits in the Senate rules committee, but even passage by the General Assembly would mean a guaranteed veto from Governor Roy Cooper.

So the only real defense parents and communities have, especially regarding this pledge, is to put pressure directly on local school districts. Stopping the institutions’ embrace of Woke ideology is most vital at the local level, and getting the undersigned teachers, who are committing themselves to break laws to indoctrinate kids, fired and far away from any taxpayer-supported classroom would be a good first step.

So who are they? Well, they just might be  indoctrinating in your community right now. Here’s the list of North Carolina teachers who have signed the Woke Warrior pledge: