Pirates Move to Shells for First Time | Beaufort County Now | East Carolina moved to the next phase of fall camp donning shoulder pads for the first time as the Pirates turned in their third workout on Hight Field inside the Cliff Moore Practice Complex Friday morning. 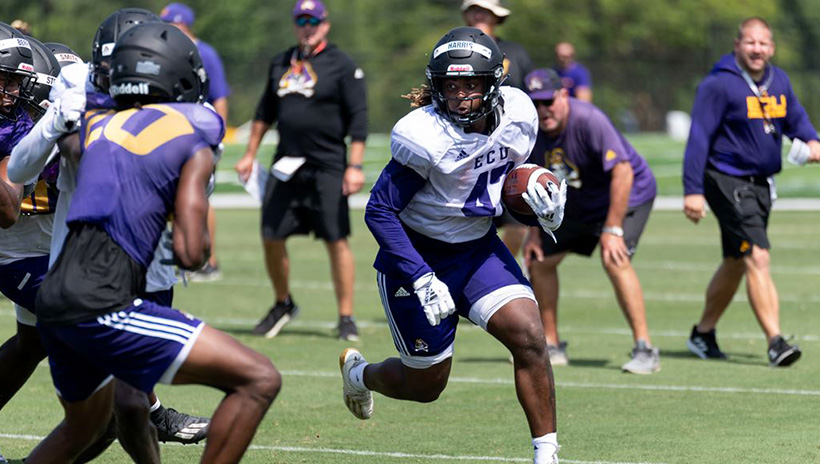 GREENVILLE, N.C.     After a pair of introductory sessions in shorts and helmets, East Carolina moved to the next phase of fall camp donning shoulder pads for the first time as the Pirates turned in their third workout on Hight Field inside the Cliff Moore Practice Complex Friday morning.

With temperatures in the upper-70's under partly cloudy skies, third-year head coach Mike Houston guided the Pirates through a two-hour practice that featured the season's first contact in all three phases of the game.

"It was day three of camp and the first day of putting shoulder pads on," Houston said. "We had a sharp practice yesterday in helmets and I would have been disappointed if it hadn't been. Today there was some good and some bad, which you would expect with the first day of pads because you have to acclimate yourself to the full contact stuff from the waist up. There were portions of practice that I thought were very, very impressive. Some guys offensively, that we expect a lot from, had some really good plays out on the field and that was good to see."

The Pirates wrapped up the workout in customary style by conducting a spirited 30-minute team-on-team segment that featured steady play by starting quarterback Holton Ahlers and several big gainers, most notably by ECU's running back and receiving corps.

"I think Holton has been very, very sharp so far," Houston remarked. "He has made very few mistakes and today in particular, I thought he was very sharp with his checks and I thought he was putting the ball where it needs to be and just a sharp start. The offense, particularly the one o-line, today at the beginning of the team period had a really clean start and I thought that went really well. There are a lot of positives right now."

"The kicking competition is going to be important," Houston added. "We have three guys vying for the spot and all three have looked pretty good the first couple of days. When we get into next week with a full live rush, that is what we need to test those guys and see where we are at."

ECU will return to action Saturday and Monday mornings for another pair of sessions in shoulder pads leading up to its first practice in full pads on Tuesday.
Go Back