Durham leak: McCain in with Soros trying to frame Donald Trump | Beaufort County Now | The man was a traitor 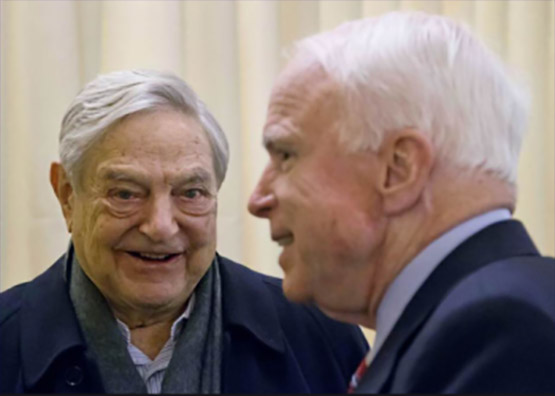 How creepy is it when you find out that George Soros hired his own detective to work with the Senate Armed Forces Committee, chaired by NeverTrumper John McCain in order to frame Donald Trump by making it appear that he was colluding with Russia?

This should surprise no one because we already knew that McCain sent an aide to get a copy of the Steele/Clinton/DNC/PerkinsCoieFusion GPS Dossier. He then shopped it around and then supplied the FBI with a copy of it in hopes that Hillary would be president.

And it doesn’t surprise us that George Soros was working against Trump, but is a mild surprise to learn that the two were working together. But we now know that court documents reported by JusttheNews.com, we learn that The Dark Lord himself, George Soros, paid for his own investigator to work for the U.S. Senate Armed Services Committee to plant the fake Trump-Russia story.

John McCain allowed him to do it. If Soros is Voldemort, McCain must be Wormtail.

The revelation that a committee led by the Republican McCain and Democratic Sen. Jack Reed of Rhode Island engaged a nonprofit with significant partisan ties is certain to reverberate in Washington and further the GOP narrative that the Russia collusion allegations were more a political dirty trick than a legitimate counterintelligence concern. Mueller concluded there was no evidence Trump and Russia colluded to hijack the 2016 election.

How did it work?

A Soros spokesman told The Hill in 2019 that the billionaire philanthropist wrote a sizable check from his personal funds in fall 2017 to TDIP in hopes it would continue “investigation and research into foreign interference in American elections and European elections.” That spokesman said Soros later learned that Fusion and Steele, who had previously worked for the Clinton campaign, had done some work for TDIP.

They all worked together to destroy Trump by smearing him with the fake scandal.

Soros infused his TDIP group in to continue “the work started under the Clinton campaign by Fusion GPS and former MI-6 agent Christopher Steele seeking to link Trump to Russia collusion. Its tax filings show it raised $7 million in 2017 to start its work.”