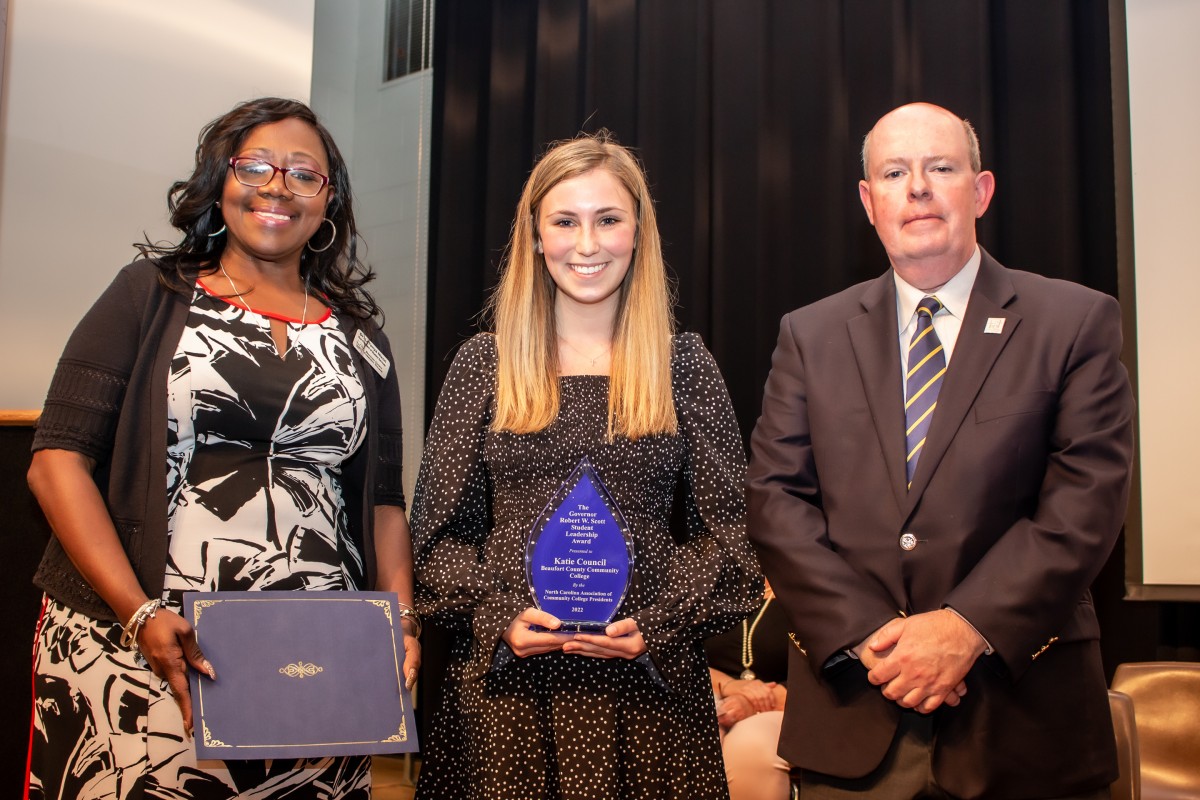 Cutline for picture: Katie Council (center) was selected from across all 58 community colleges in North Carolina for the Gov. Robert Scott Student Leadership Award. She is joined by VP of Student Services Dr. LaTonya Nixon (left) and BCCC President Dr. Dave Loope.


WASHINGTON, N.C.     Beaufort County Community College student Katie Council was selected as the winner of the Governor Robert Scott Leadership Award. The North Carolina Community College System chooses one student per year for the award that recognizes student leadership among all 58 community colleges in the system. Council currently serves as the president of Beaufort's Student Government Association (SGA). She will attend East Carolina University in the fall as a biology major on a pre-pharmacy track, and she is an EC Scholars recipient, the highest honor at ECU. She is the first student from Beaufort to win the Gov. Scott Award.

In 2004, the North Carolina Association of Community College Presidents created the Governor Robert Scott Leadership Award to recognize student leadership on a statewide level while also honoring former Governor Bob Scott. Gov. Scott served as the State's chief executive from 1968-1972 and then was president of our system for 12 years from 1983-1995. Gov. Scott passed away in January of 2009, but he was very humbled that the system named a student award in his honor. This is an award designed to highlight outstanding curriculum student leadership and service.

Council is a Washington High School senior, captain of the Pam Pack cheerleading team, and will graduate from Beaufort with an Associate in Arts this May. The enthusiastic SGA president has rarely passed up a leadership opportunity. She is the vice-president of Gamma Beta Phi, Beaufort's honor society, and the president of the BCCC Environmental Alliance.

Besides cheer, Council also played on the golf team, was a member of the Fellowship of Christian Athletes, and was a part of the SGA since she started at Washington HS. She started as freshman class vice-president, moved into sophomore class president, and stayed on with SGA during her junior year, though there were no officers elected that year.

Council is in her second and final year at Beaufort through Career & College Promise (CCP) and holds four leadership positions between Washington HS and BCCC. Through her endeavors, she has helped raise funds for Ruth's House, a domestic violence shelter in Beaufort County; helped clean up the Pamlico River with Sound Rivers, a water quality organization; and helped start planning a rain garden to handle campus stormwater and beautify the campus.

"I have always loved and enjoyed helping people any way I can," said Council. "I want to make a positive impact on as many people as possible in my life. Being a leader at BCCC has allowed me to facility this positive change in the lives of others so far."

"Katie is truly one of the most outstanding students I've ever met," said Dr. Dave Loope, BCCC President. "Not only does she possess the intellect and intense work ethic needed for extraordinary academic success, she places all of these remarkable talent in the context of serving others. Our world is in good hands if we can hand it over to young women such as Katie."