Our breakdown of Tuesday's primary results 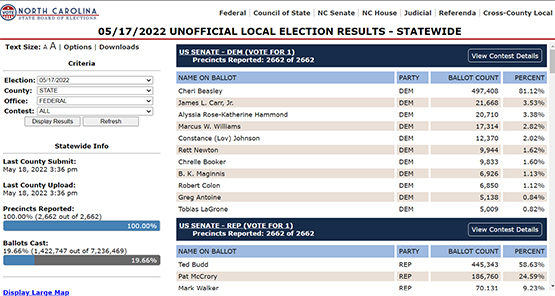 Tuesday’s May 17th primaries will be seen in Beaufort County as a watershed election. The “off-year” election garnered only 9,651 (29.65%) of the registered voters who bothered to vote.  Notwithstanding the fact that there was no national contest to draw attention, the low turnout was an indicator of voter disillusionment with the political system.  As one told us, “why vote? What difference will it make?  They are all corrupt…whether there’s a ‘D’ or an ‘R’ beside their name!”  It’s pretty hard to argue rationally with that, except for individual exceptions.

The third takeaway we see in these results is the phenomenal defeat of a sitting Sheriff.  Scott Hammonds banished Ernie Coleman from office, regardless of what happens in the General Election. And it was not even close in the Republican primary. Hammonds got 3925 votes while Coleman trailed with 2696.  Hammonds is the Republican nominee and thus the “Unaffiliated” factor described above will likely insure he will win in the General Election.  We suspect he should be getting measured for a new uniform. This change was likely driven by the exposure Hood Richardson gave to Ernie Coleman in a series of column here at the Beaufort Observer.  Corey Rogerson took only 1877 votes to win the Democrat primary for Sheriff while Petre Franks lost again with only 720 votes, followed by Harold Bright. That’s less for all three Democrat candidates than H a m m o n d s received, not counting the 2700 Coleman vote.

The third takeaway, that we would characterize as a phenomenon also, was the School Board race. The voters there sent a clear message that change is needed. Both sitting members Michael Bilbro and Butch Oliver lost decisively even with low participation. Gary Carlton won in District 6 with 544 (61.4%) and Donald Shreve carried District 8 with 560 (55.39%). The other even numbered districts were not contested in the primaries. Our observation is that the People are fed up with the schools in Beaufort County, even if they do like their teacher(s) and/or school. We sense they voted on macro issues such as an arrogance in the administration and board toward parents being involved in the decisions that impact their children. They voted against a board more than they voted for or against an individual we believe. They don’t want any more social engineering, indoctrination and “we know best” from school board members. Rather, they want to see their children learn the basics of reading, writing, math and science. Many feel the schools are not doing a good job of teaching civics and want learning about what has made America great is more important than emotional gobble d’ gook. We would suggest to the Superintendent that Tuesday’s election should be a strong and clear message that he needs to produce results in traditional student performance or seek another job. The seeds were planted Tuesday and will likely be multiplied in November.

Finally, (yawn) the County Commission.  Frankie Waters took the top spot with2240 votes for only a 35% share of the votes cast. Stan Deatherage took 1984 or 31% while Tandy Dunn completed the slate of Republican nominees for the November election. Dunn polled 1100 votes and Dawn Slann was close behind with 1096. It is interesting to ponder where Slann’s voters will go in November. Those 1096 could determine who wins one of the three seats that will be up for grabs. That will be interesting to watch. There was no Democrat primary for commissioner.  One might jump to the conclusion that Democrat Ed Booth will be one of the three elected, as in years past, because of racially polarized voting, but that might not be a sure bet, depending on where Slann’s voters go and turnout.  If the trends continue, eventually the Democrats may not be able to guarantee the election of one of the three nominees by limiting the choices voters have.  It is significant that Keith Kidwell trounced his opponent in the Republican primary with 5780 votes.  Frankie Waters will have to get a significantly larger percentage of those voters than he got Tuesday in order to hold on to the top slot, or even the second slot.  Be that as it may, the bigger issue in Beaufort County in November will be: DONALD TRUMP. Trump will drive turnout and if the economy does not pick up the Democrats will be in for some rough water this fall.  Thus, we presume that a Republican landslide at the state and national levels will spill over into Beaufort County.  Ed Booth should be worried about that and Frankie Water should not assume he’s got it in the bag if the Trump Voters vote their pocket books in November.  Taxes will possibly be the cornerstone of that election in Beaufort County.

We should also mention another issue lurking in the shadows, and that is the changing of the Limited Voting system for Beaufort County commissioners. Each biennial election voters get only one vote for county commissioner even though four seats are open in Presidential years and three in off year elections. Some politicos (or those who fancy themselves as such) are seeking to change that system to a district system. A petition is being circulated to put that on the ballot, perhaps in November if enough signatures can be obtained. We are amazed that anyone would sign those petitions simply because while they call for a district system the districts are not yet known. Talk about buying a “pig in a poke.”  Our response is: Show me the map before you expect me to sign any petition.  We suspect a single member district system, without any at-large seats will never fly once the people realize their voting power will be cut in half in a single member district system. In that setup, without at-large seats, each voter would get to vote for commissioner every four years rather than every two years as is true now.  And that says nothing about not being able to vote for a candidate you like, but don’t live in their district.  Limited voting is a bad system, but a district system is not all good and no bad. We favor at-large voting, period.