ECU Takes Game One Of Supers, 13-7 | Beaufort County Now | GREENVILLE, N.C. – Hosting its first super regional on campus and in front of a packed crowd of 5,723, No. 8 National Seed East Carolina scored five runs in the eighth inning on its way to a 13-7 series opening win over No. 9 Texas at Lewis Field inside Clark-LeClair Stadium. 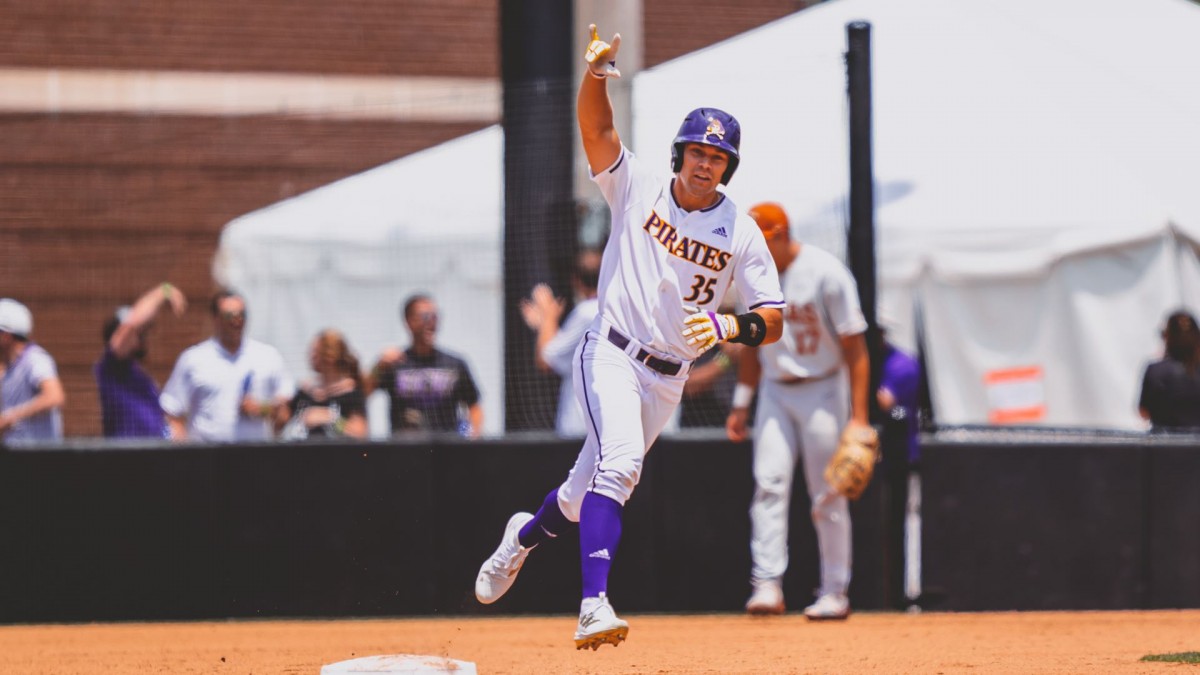 GREENVILLE, N.C.     Hosting its first super regional on campus and in front of a packed crowd of 5,723, No. 8 National Seed East Carolina scored five runs in the eighth inning on its way to a 13-7 series opening win over No. 9 Texas at Lewis Field inside Clark-LeClair Stadium. With the win the Pirates improved to 46-19 on the season (winners in 22 of last 23 games), while the Longhorns dropped to 45-20.

Leading 8-7 going to the bottom of the eighth inning, ECU scored batted around scoring five runs on five hits extending the Pirates lead to five, 13-7. After making a diving defensive play to end the top of the eighth inning, Alec Makarewicz belted a solo home to start the bottom of the stanza flipping the momentum back ECU's way. He took an 0-1 offering from new Texas pitcher Tristan Stephens to left-center that hit off Douglas Hodo III's glove and bounced over the wall. Joey Berini followed with a walk and two batters later Lane Hoover singled to center advancing Ryder Giles to second after he entered as a pinch runner. Bryson Worrell's fourth hit of the day, a single to right field scored Giles for the second run. A two-RBI double to right field by Jacob Jenkins-Cowart plated Hoover and Worrell, while Jacob Starling's second hit of the contest pushed across Jenkins-Cowart to cap the scoring on the afternoon.

Texas wasted little time in getting on the board scoring a pair of runs in the first for a 2-0 advantage. Hodo III led off with a double down the left field line and came around to score on Murphy Stehly's two-out home run to left-center.

ECU answered UT's first punch with a three-spot in the home half of the third inning. Agnos walked, Hoover reached on a bunt single and Worrell singled down the right field line to get the stanza going. A passed ball scored Agnos and allowed Hoover and Worrell to advance 90-feet before Jenkins-Cowart singled to right center pushing across Hoover and Worrell for the Pirates first lead of the contest.

The Pirates padded their lead with three more runs in the fourth and one in the fifth making it a 7-2 ball game. Ben Newton doubled down the left field line to begin the inning and scored when Starling blasted his fifth home run of the season, a two-run shot to left field. Makarewicz followed with another double down the left field line and Agnos' single through the left side plated Makarewicz. Worrell led off the fifth with a solo shot to right center, his 19th on the season and 39th of his career.

Consecutive solo home runs to open the sixth by Ivan Melendez (No. 31) and Stephly (No. 19) pulled the Longhorns within three, 7-4. Texas would add another run in the seventh on Hodo III's ninth round tripper of the year cutting the deficit to two, 7-5.

Once again, ECU responded with a run in the home half of the seventh for a three-run advantage, 8-5. Worrell singled through the left side, moved to second on a wild pitch and came around to touch home on Josh Moylan's RBI base knock to right field proving to be the game-winning run.

Texas pulled within one, 8-7, after plating a pair in the eighth. Austin Todd reached on a bunt single, Skyler Messinger singled up the middle and Silas Ardoin's ground-rule double to right center scored Todd. After Agnos entered the game with runners on second and third, Jack O'Dowd grounded out to second plating Messinger.

The two teams return to the diamond on Saturday, June 11 for game two of the super-regional round with the Pirates one win away from reaching the Men's College World Series. First pitch is slated for 12 noon (ET) and will be televised on ESPN2.
Go Back