McCarthy needs to step aside 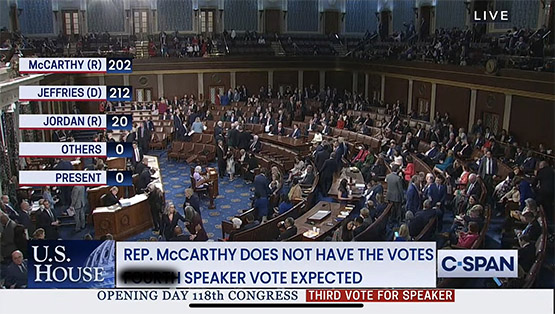 So the week came to an end without Kevin McCarthy cutting enough deals to become Speaker.  That is a good thing, in our opinion.

The Freedom Caucus has stood strong, thus far and refuses to give him the necessary votes after eleven votes.  It is time for McCarthy to withdraw and “the deal” being struck between the RINO’s and the conservatives in the House majority.  We don’t know who the person is that both sides can agree upon but as long as the conservatives stand strong, it doesn’t really matter who the Speaker is.  What matters is that “business as usual” will have taken a blow, hopefully a death blow.

We think what this imbroglio reflects is that many Republicans and Independents are simply fed up with “business as usual” and they want change.  That is, change in the GOP leadership in both the House and Senate.

When you boil it all down, the only real reason McCarthy’s supporters give if that if the conservatives fold then they can “get to work.”  Note that they do not argue that he should be speaker because of his record.  Well, many of us do not want to see them get to work if that means “more of the same.”  McCarthy is not essential for the survival of the Republic.  In fact, just the opposite may be true.  But the simple fact is:  He does not have the votes to become Speaker and if he cuts enough deals he may be cutting off his nose to spite his face.

Conservative voter, both Republicans and Unaffiliated, should call their Congressman and tell them to stand strong and demand that McCarthy step aside and the focus should be on electing a compromise Speaker.  You need not talk to the Representative, just leaving a message.  If enough people do that, they will get the message.