The Boss Becomes The Bully! Bruce Springsteen Boycotts NC so Let NC Boycott Him !! | Beaufort County Now | Diane Rufino makes the point that boycotts can work both ways, so let's put our good sense and our support of HB2 into practice and boycott Bruce Springsteen! 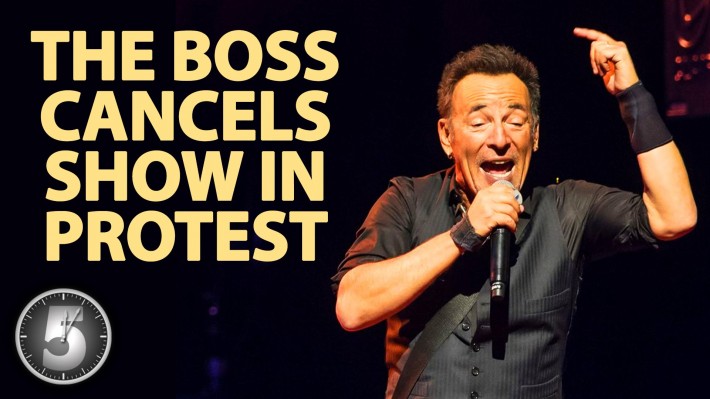 I AM NOW BOYCOTTING BRUCE SPRINGSTEEN! PLEASE JOIN ME!!

Bruce Springsteen cancelled his upcoming show in Greensboro as a protest against the state's controversial 'bathroom' law - HB2. HB2 provides that public bathrooms, locker rooms, and showers assigned separately for Males and for Females can only be used by those individuals who have the correct biological genitalia. A person's sex is identified on one's birth certificate. A person who is truly a transgender - which means "crossing from one gender to another - is one who has made certain commitments to making that cross, including having a medical procedure and hormone treatments. Once these "concrete" steps are taken, the person's birth certificate is changed and then there is no issue about which bathroom the person can rightfully use (and feel comfortable in, as well as the others who use in). Absent any concrete steps towards changing one's sex, then we just have a gender confused individual.

I am a Jersey Girl and have always been proud of it. I have always considered myself blessed to be born and raised in a state that values education and success, appreciates culture, and enjoys the unity and pride that great Jersey rockers like Bruce Springsteen and John Bon Jovi foster. For most of my life, I have made it a priority to buy every Springsteen album, update every Springsteen playlist, share his music with my new neighbors (North Carolinians), and attend every one of his NC concerts. That loyalty ends today.

It is one thing to make great music and give a great show. There is an implicit bond made made with fans. Great music and great shows earn loyalty which eventually benefit the musician when he no longer can make great music and put out great albums. Fans let certain things slide. But to let fans down because of a personal grudge and a personal campaign is a material breach of that bond and that loyalty. Fans have gone through far worse in their tolerance of Springsteen and in the distance and inconvenience to attend his shows than he has in his tolerance of North Carolina's HB2.

To be clear, Springsteen lives in California and NOT in North Carolina. Laws that affect his backyard are made by politicians that he has a voice in electing. He needs to respect the backyard that belongs to the people in North Carolina, as they've created through THEIR voice and their duly-elected officials.'

And above all else, he needs to respect the loyalty of his fans. My guess is that a good chunk of his fans, including those who WOULD HAVE attended his Greensboro show, think like him and also are offended by HB2.

Now, I wanted to write a more scathing opinion of Springsteen, the bully, but frankly I am swamped with school work and in preparing lessons for my US Government & Politics class. I work hard to prepare lessons that are objective and are fair to both sides of all issues. That is the very least that my students expect and that is what politics is about... the robust education and discussion/debate on issues that determine what government will do for us and what laws should be passed for the best interests of our communities. Luckily, I found a rant that sums up perfectly how I now feel about Springsteen, and I don't think its author will object to me sharing it.

I used to really dig Springsteen. The best I'd ever known in Rock, absolutely the best.

On a beautiful day in Los Angeles at the reservoir, many people were walking. Springsteen came toward me and my girl Rona, a cute and savvy Jewish girl from Brentwood. He was walking with his then wife, I think her name was Julia (?). I remember what they were wearing. Shorts, socks, tennis shoes, t-shirts, zippered hoodies, baseball caps and big sunglasses. Springsteen had that shit eatin' grin on his face...he finally got a half way decent chick. A feeling only another guy would know and understand.

After we passed each other I really felt the urge to "jack that muther fucker". Reasons: For sellin' out his music (only sissyboy chumps sell out their music), and for sellin' out on the United States of America. Springsteens liberal and negative viewpoints on this country bruised the image of the only true Promised Land. The land of the United States of America. The land and everything that the Pilgrims gave up just to gain so little for their personal selves. Freedom...you can't hold it in your hands...you can only hold it in your heart...

Springsteen is now just an old piece of shit with money, a past, and disrespect for his wife. When you take a vow and you take a wife, you make a covenant with God. With God and Country, you may not sell out. God is too powerful and country is too cherished.

Springsteen for me is now dead...


BOYCOTTS GO BOTH WAYS. I HOPE THE GOOD FOLKS OF THE SOUTHERN STATES WILL BOYCOTT SPRINGSTEEN ... the man who used to be called "The Boss." Now he's just a bully. How he's just another elitist who uses his celebrity to be a social and political Bully when others don't think like he does.

Is that Springsteen giving us the finger? (see pic below) 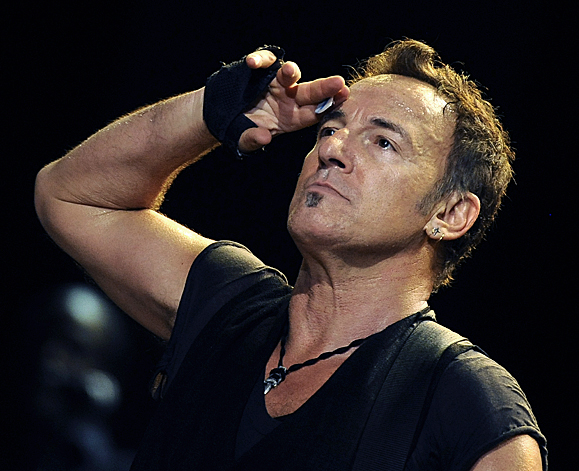