Cooper’s Office May Get Legal Tab For H.B. 2 Suits Filed Against UNC | Beaufort County Now | North Carolina Attorney General Roy Cooper may be required to reimburse the University of North Carolina system for legal fees it must pay following Cooper's refusal to represent the university in a federal lawsuit over the state's controversial House Bill 2

Cooper’s Office May Get Legal Tab For H.B. 2 Suits Filed Against UNC

Published: Monday, May 30th, 2016 @ 3:52 pm
By: John Locke Foundation   ( More Entries )
Publisher's note: The author of this post is Kari Travis, who is Social Media Specialist for the Carolina Journal, John Hood Publisher.

Board of Governors says if Attorney General Roy Cooper won't join lawsuits, board will ask General Assembly to force Cooper's office to pay for outside counsel


CHAPEL HILL     North Carolina Attorney General Roy Cooper may be required to reimburse the University of North Carolina system for legal fees it must pay following Cooper's refusal to represent the university in a federal lawsuit over the state's controversial House Bill 2.

On May 27, the board voted to request that the General Assembly assess Cooper's office for all legal fees, should he fail within two months to agree to a formal request from board chairman Lou Bissette for reimbursement.

Bissette, who said he hopes Cooper will heed his letter, voted against the board's motion to take the matter before state lawmakers if the attorney general fails to do so. 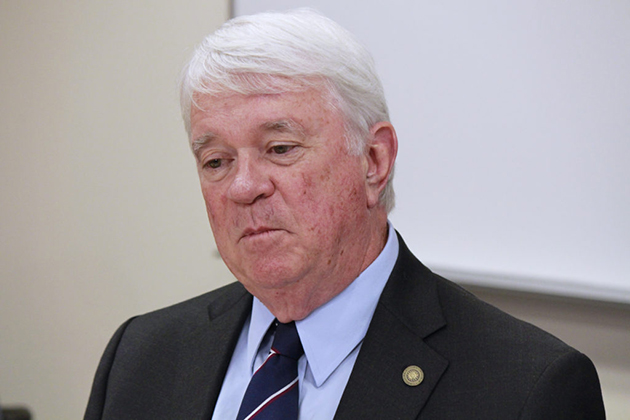 UNC Board of Governors Chairman Lou Bissette, pictured here at the May 27 BOG meeting, has asked Attorney General Roy Cooper to reimburse the university system for legal fees it incurs in lawsuits related to House Bill 2. (CJ Photo by Kari Travis)

Bissette and system President Margaret Spellings have insisted that the university does not practice discrimination as charged in lawsuits filed by the U.S. Department of Justice and the American Civil Liberties Union of North Carolina. The lawsuits contend that H.B. 2's provision that students must use the bathroom and changing room facilities of the gender on their birth certificates discriminates against transgender students.

Cooper called the law a "national embarrassment" in late March when he said he would not defend the state in any lawsuits related to H.B. 2.

"As you all know, it's a political year, and everything is highly politicized," Bissette said during a press conference following the board's vote. "I just thought that the letter approach was a more measured approach to requesting the attorney general to assist us in paying for these lawsuits. I did not think that there was a need at this point for the resolution of the board of governors on that particular subject."

While a few board members agreed with Bissette that the letter itself was an adequate step, several others expressed concern and indignation over Cooper's refusal to represent the university, citing the action as costly and irresponsible.

"Attorney General Roy Cooper's decision to refuse to represent the University in these lawsuits is complete dereliction of duty," said board member Marty Kotis. "I understand that he's very busy campaigning [for governor] right now, but he needs to do his damn job. And if he is unwilling to do so, he should simply resign and focus all of his time on the campaign. This is a major financial impact and his actions are going to cost the university millions of dollars."

The UNC system has hired three attorneys from two different law firms, Jones Day and Wilmer Cutler Pickering Hale and Dorr, both based out of Washington, D.C. Legal fees will be high, and there is currently no way of knowing how long the university will be in the fight, Bissette said.

"If we somehow find a way out of these lawsuits early on, the costs would be less," Bissette said. "If we're in them for a long time, [well], you know what the legal fees are today. So the sky would be the limit."
Go Back