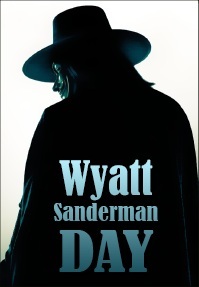 Wyatt loved his anominity here on BCN, so we made this avatar especially for him. For some reason the V character from "V for Vendeta" seemed perfect for Wyatt.
Wyatt Sanderman Day was a friend I made as he entered his twilight years. One would not believe that singular truth by looking at the man: his peppery hair, his square jaw, his thick working-man-hands, but make no mistake about the fact, his days were surely numbered.

Lung Cancer took Wyatt a just about a year or two back, and not many probably knew or cared about his corporal demise, even I never knew that he was sick. About a 7 months after Wyatt returned to Washington, Georgia, his place of birth and point of origin, his aged mother sent me a kind note thanking me for being a good friend to her son, and, very sadly, that her son had died a few weeks back. She was going through his personal effects, and discovered some kind mentions of me in Wyatt's written hand; still, if she had not discovered those scribbled passages, I would have never learned of my friend's temporal demise.

That was Wyatt. Like an old family dog that slowly ambles into the woods to find a comfortable place to lay down and die, just on the innate sense that it was his time, Wyatt was no different. Washington, Georgia was Wyatt's sunny, comfortable spot to make his peace, and breach an infinity of the goodly spirit.

The strange thing about Wyatt's illness was, he was not a heavy smoker, in fact, I rarely saw him smoke. Did he hide it from me because he knew I hated the idea of ingesting tobacco products? My dear mother died of Lung cancer ... smoked nearly until the end. I have always hated the smoking of cigarettes; married a woman who did not smoke; made as sure as I could that my four children do not smoke, and I pray that holds true.

But with Wyatt's cancer, I think it was just his time, his way of finding his end, his new beginning, or, possibly, I am fooling myself for the benefit of my fondest memories of the man, and his singular legacy as a patriot. Still, in many ways Wyatt was too good for this world. He certainly was too good to be sitting in the cockpit seat of a A-1 Skyraider (Spad) for two hitches in Vietnam after he joined the Navy to insure his patriotic duty, a family tradition. 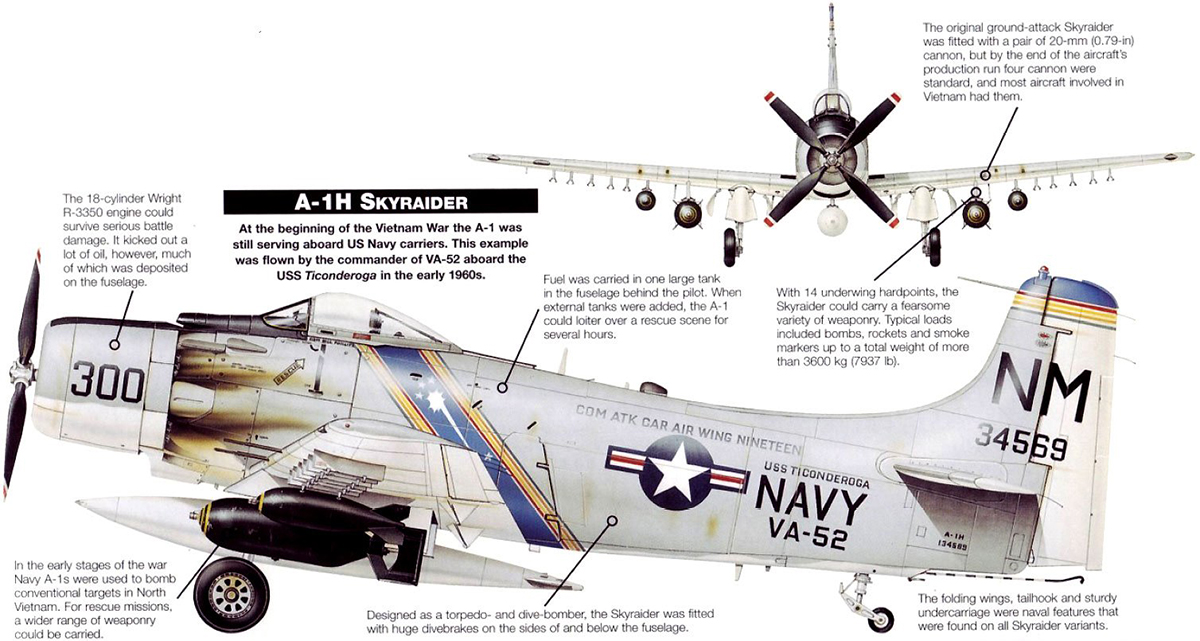 This A-1 Skyraider (Spad) was Wyatt's every day existence for over two years in the South China Sea, and it took its toll on this good man's spirit: Above and below.    Click image to expand. 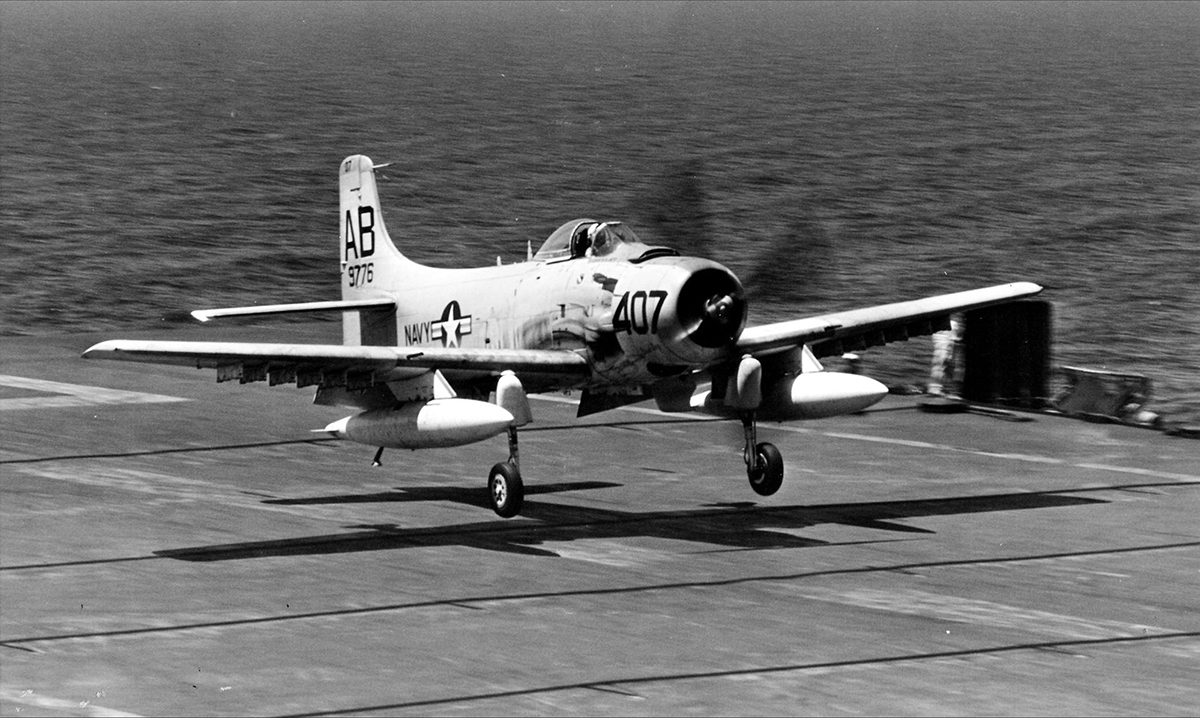 But, when one thinks about the ravaging effects of the Hell of war, all Americans are too good for the killing that war demands. When I say "too good", I mean, Americans have long been a good, mostly Christian people, and killing others does not come natural for us, even though we, in an historical context, are so damn good at it.

Wyatt at his best was not a killer of little yellow men; he was a spinner of yarns, tall tales, loved to paint, loved discussing good films, played guitar - not very well - and sang like a hillbilly on the mend; even worse than his guitar picking. Flying a warhorse like the Douglas Skyraider over South Vietnam, after being catapulted from the U.S.S. Ticonderoga, day after day, loaded with up to 8,000 lbs of rather diverse ordnance, including four 20 mm canons was not who Wyatt really was. The "Spad" was a heavily armored, high powered, slow flying, low flying killing machine, and that kind of job description would take its toll on most corn fed Southern, Christian bred boys, who grew up loving their mamas, the Lord and football; but, not necessarily in that order. Wyatt was a reluctant warrior at heart, and suffered terribly from the daily call to kill an unknown enemy.

When I met Wyatt, he was nearly at his breaking point, often did not fit in the normal workplace, and then, nearing 50, just needed a place to hole up, collect his meager VA stipend, and make peace with his spirited soul. As a real estate broker, I found him a rental in the Blounts Creek area, and made sure he stayed settled, caught up - all pro bono - and a bit more during his lean times.

The aforementioned misplaced horror of the reluctant warrior certainly did take its toll on Wyatt, and, he suffered terribly from PTSD (Post Traumatic Stress Disorder), but not because he feared for losing his life flying over the rice paddies of Vietnam, but because he lived, and so many humans died by his hand, his patriotic hand, and that is the ugly paradox of war, this Vietnam War.

In return for my complete fellowship, Wyatt was more than happy to contribute to Beaufort County NOW, and some other sites that I publish, one specifically on the Arts, and well he did write them all. Too date, Wyatt's compositions are the most popular with our readers, and even though the Wyatt Sanderman Day has not, obviously, submitted any new material for a few years, his posts continue to draw consistent readership.

Understanding this reality of Wyatt's continued popularity, and to honor his dual personality of super patriot and kindly spirit, wrapped up in this flawed reluctant warrior, and very real American spirit, I have determined that the Wyatt Sanderman Day brand shall continue, but with a personalized twist. The art based posts by Wyatt will continue, but, obviously not written by the real Wyatt Sanderman Day; he could never be replaced.

However, and this is a huge "however", some of these posts will be signed simply as Wyatt, where contributors will surrender their identity, and accept that identity of simply Wyatt. Who knows, maybe the publisher lend an effort to honor an old friend and, like Wyatt Sanderman Day, and to continue to inform and entertain the public.
Go Back