Bonus Deal: Thoughts of a cold and hot war veteran. 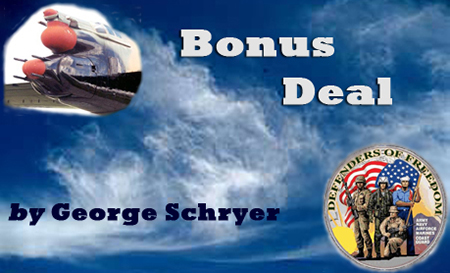 You have lost your right to decide for yourself what is important or relevant for you. Once you lose a right and don't do something about it you will soon lose another and then another until you have no rights at all. Article 1 of the Constitution is erased. And the rest of that beautiful document will soon disappear also.Turn on your computer, TV, or read your newspaper and what do you see? You see what someone somewhere allows you to see or read. The news today is the President is not allowed to voice his opinion or be heard by many of his followers. That action is because someone somewhere has decided they don't like what he says or does and they control the content of their collective voice. The constitution, article 1, says you have the right to free speech, at the same time you also have the right to determine what your company says or does.

You might ask why I think this situation is important enough for me to comment on it. As the headline says and some of you probably know I spent 24 years in the military. At one point early in my career I worked on aircraft that were designed and made for nuclear war. When working on those aircraft there were certain things you could do and others that you couldn't do without immediate supervision, regardless of rank or position. Later in my career I flew as a designated crew member on other aircraft designed specifically for nuclear war. They too had the same restrictions placed on them regarding what you could or couldn't do.

There were times that my crew and I would fly an aircraft loaded with nuclear weapons on a 24 to 26 hour flight in the cocked and ready position. If we received a certain signal and verified its accuracy, we would take those nuclear weapons to a certain point on the earth and unload a disastrous amount of destruction on that area. This was also being done by other crews in other aircraft at different locations. There were also many crews around the US on “alert” for weeks at a time to respond with nuclear destruction.

I write all of that to say this. Each one on my crew members were required to spend countless hours in studying the above actions. We were also required to brief every aspect of that operation to and our individual procedures and actions to someone of a higher authority. When you thought of the outcome of your mission you immediately began to make sure you as an individual knew all you could about the disaster you might have to deliver someday.

Can you see where I'm heading? First “the leadership” will decide to silence your voice, then “they” will decide what you see, then where you live. We are in the first stage of seeing this here in supposedly the freest country in the world. Look closely at what our younger generations are being taught. On campus after campus we see the silencing of “free speech”. We see in our early education programs where young children are taught to accept concepts that their parents find offensive yet have no control of the content without removing their child from that situation.

When the opposition party leaders spend years trying to remove a duly elected president, or start calling for the removal of the President because they don't like what he says or does, and major communications owners start silencing voices of those they don't like and get their support from those of the opposition party we are well on the way to socialism. They won't admit it but that is the goal and they can't or won't see, that if that movement continues they will ultimately be fodder for the “machine”.  They laugh about George Orwell's 1984 but it is closer to becoming reality that you might think.

Many will say “oh that can't happen here”. If only that was true. If we don't stand up for our rights we will surely lose them and will have no one to blame but ourselves.