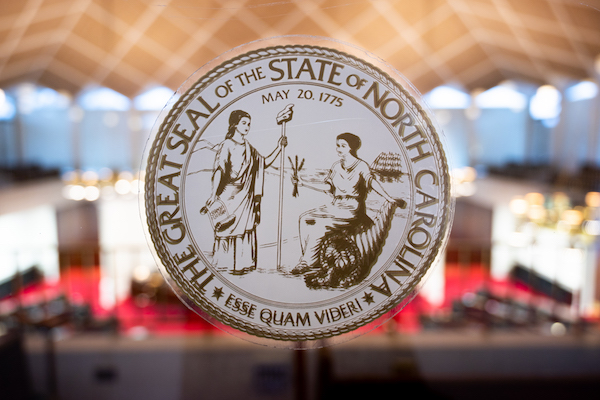 Partisan foot soldier or defender of constitutional checks and balances?

Democratic state senators recently had two chances within the span of 30 minutes to choose one option or the other. In both cases, every Democrat in the Senate chamber picked party loyalty over the General Assembly’s constitutional role.

Their choice bodes ill for the legislature’s future as the branch of state government responsible for making laws.

Democrats cast their votes late in the afternoon of April 27. In the first case, they were considering Senate Bill 346, a measure designed to rein in the governor’s emergency powers.

During the COVID-19 pandemic, Democratic Gov. Roy Cooper often has taken action unilaterally to close and reopen schools and businesses, limit the sizes of indoor and outdoor crowds, and force people across the state to wear masks. He has based his executive orders on powers granted under the state Emergency Management Act.

Cooper’s most recent actions have tended toward reopening and loosening restrictions. But the governor never has backed away from the claim that he can make decisions on his own. That means a new wave of bad COVID-19 news could prompt another Cooper-mandated shutdown.

S.B. 346 would force the governor to involve more elected officials in such far-reaching decisions about people’s lives and livelihoods. The bill would allow the governor to continue issuing emergency executive orders. Within 10 days, though, those orders would expire unless the 10-member Council of State supported the governor’s decision.

With the Council of State’s endorsement, an executive order could extend as long as 45 days. After that point, the governor would need approval from the General Assembly. Without lawmakers’ votes, an order would expire. Plus the governor “shall not issue a substantially similar executive order arising from the same events that formed the basis to issue the initial executive order that was not extended.”

At the outset of Senate debate on the measure, Republicans pushed the start date back to Sept. 1. “The intent of this change is to get us through the current situation,” said Sen. Bill Rabon, R-Brunswick, a primary sponsor.

Cooper’s unilateral control over state government response to the COVID-19 pandemic would end up extending to nearly a year and a half. Afterward, he would need to coordinate his plans with others.

“This would require the legislative [and executive] branches to work together and develop a collaborative solution,” Rabon said.

“Emergencies cannot be managed by committee,” said Sen. Natasha Marcus, D-Mecklenburg. “In a crisis, decisions must be made quickly and decisively.”

Perhaps Marcus ignored a key fact. The bill would give Cooper more than a week to respond to a crisis without any restraint. He would not need to consult lawmakers for the first month-and-a-half of any new emergency.

That’s possible. But only if governors make controversial emergency decisions that spark political fights. A governor who knows he has to cooperate with other elected officials from both parties might take a different approach. He might take competing ideas into account when crafting his plans.

Sen. Amy Galey, R-Alamance, explained why no legislator should accept the status quo. “Once the governor invokes the Emergency Management Act, his authority to govern by fiat lasts until he decides — he decides — not to use any more,” she said. “There’s zero separation of powers, and the governor has all the powers for an undetermined period of time.”

Just 28 minutes after Galey and her GOP colleagues prevailed in a party-line vote to approve S.B. 346, senators split 28-21 in endorsing Senate Bill 360. Once again, every Republican said yes. Every Democrat voted no.

In this case, the bill targeted the state’s top law enforcement officer, rather than the governor. Titled “Prohibit Collusive Settlements” by the attorney general, the measure aimed specifically to protect the General Assembly’s role in addressing lawsuits challenging its actions.

When a plaintiff sues to block a state law or a provision of the N.C. Constitution, the attorney general would have no authority to settle the suit on his own. He would need joint approval from the state House speaker and Senate leader.

Yet S.B. 360 would have no impact on that settlement. Looking forward, It would protect the General Assembly’s collective interest in dealing with future lawsuit settlements.

Senators interested in preserving their constitutional role as state government’s lawmakers should like S.B. 360. Yes, it would restrain current A.G. Josh Stein. But it also would apply the same restraints to a future state attorney general of either major political party.

It’s hard to see why Democrats would line up unanimously against the proposal. Unless, that is, they’re prioritizing their political party ahead of constitutional checks and balances.

They want to be partisan foot soldiers, not defenders of the General Assembly and its proper role in state government.