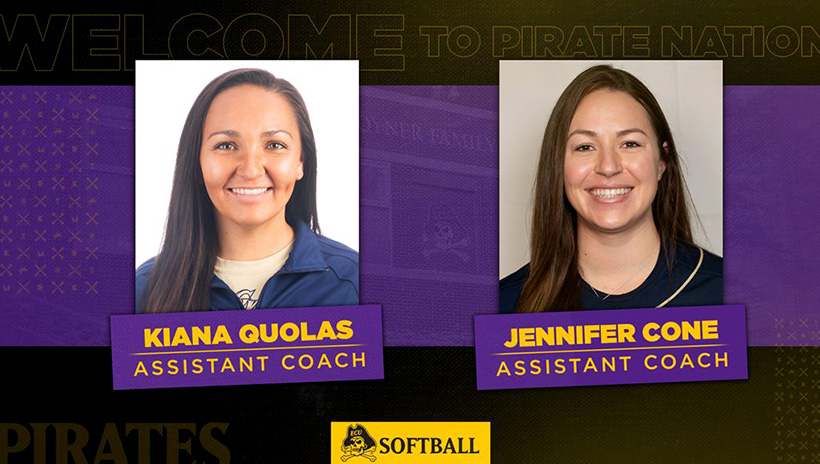 GREENVILLE, N.C.     Kiana Quolas and Jenna Cone have been named to the East Carolina University softball coaching staff according to an announcement by newly-appointed head coach Shane Winkler on Monday.

Quolas and Cone both come to Greenville after spending time working with Winkler at George Washington University. Quolas served as an assistant coach with the Colonials and will serve in the same capacity at ECU. Cone recently finished her playing career as one of the most decorated athletes in GW history and will begin her coaching career as an assistant with the Pirates.

"I'm excited to add both Kiana and Jenna to our staff here," Winkler said. "They will be a perfect fit for the championship culture we are looking to build at ECU."

Quolas spent the past three seasons on Winkler's staff at George Washington, working primarily with the team's pitchers. She helped the Colonials reach new heights as the team captured a program-record 44 wins in 2019, earned a share of the first regular season Atlantic 10 softball title in GW history as well as making an appearance in the National Invitational Softball Championship Liberty Regional. The Colonials' rapid ascent with Quolas' assistance continued in 2021 with their initial outright A-10 trophy and first appearance in the NCAA Championships.

Under Quolas' tutelage, Sierra Lange became the first GW hurler to be named the A-10 Pitcher of the Year in 2021. Lange spearheaded a pitching staff that set a George Washington record and finished 18th nationally with an team earned run average of just 1.97. The staff also finished third in the NCAA in strikeout-to-walk ratio, punching out 5.60 batters for every free pass awarded.

"Kiana was instrumental in building a championship pitching staff at George Washington," Winkler explained. "Her ability to develop pitchers and improve their fundamental and mental game is going to be important for our staff moving forward. She's quickly becoming one of the best young pitching coaches in the country and I'm looking forward to her working with our pitching staff."

Cone will transition to her first coaching assignment after closing out an historic playing career for the Colonials, which included becoming the first repeat A-10 Player of the Year in more than two decades after winning the award in both 2019 and 2021. She also earned National Fastpitch Coaches Association (NFCA) Second-Team All-America honors in 2021 after finishing in the Top 50 nationally in doubles (15), home runs (17), home runs per game (0.35), on-base percentage (0.523), RBIs per game (1.06), slugging percentage (.880), total bases (125) and toughest to strike out (23.7).

"Jenna just finished up one of the best offensive careers in NCAA history while playing at George Washington," Winkler added. "She's going to be a great addition to our staff while working with our hitters, catchers and infield. She has a bright future in this game, and I couldn't be more excited for her to begin this next chapter in Purple and Gold,"

Cone graduated from George Washington in 2020 with a bachelor's degree in communication and is currently nearing completion of a master's in media and strategic communications, also from GW.
Go Back