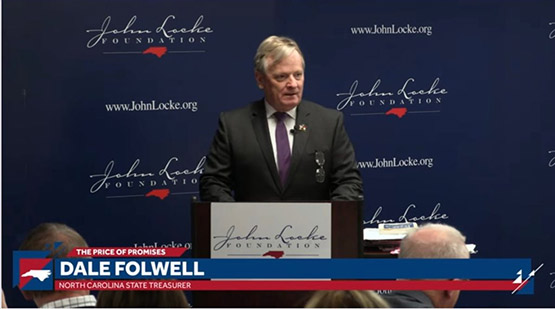 N.C. State Treasurer Dale Folwell has joined 24 state treasurers in signing a letter opposing a portion of national Democrats’ $3.5-trillion budget reconciliation bill that would expand the power of the Internal Revenue Service.

The proposed legislation — backed by the Biden administration — would give the IRS new power to monitor American bank accounts with more than $600 in deposited funds. Under the bill, banks would be forced to report deposits and withdrawals from bank accounts above that threshold. The proposal is meant to “improve tax compliance” and “will enhance the effectiveness of IRS enforcement measures and encourage voluntary compliance,” according to the U.S. Department of the Treasury.

Folwell is objecting to the proposal based on its capacity to hurt lower-income Americans and smaller community banks.

“I believe that everyone should pay their fair share of taxes,” said Folwell, a Republican, in a statement. “However, this proposal is an unprecedented invasion of privacy that could actually increase the problem of the ‘unbanked’ and ‘underbanked’ in America.

“These new IRS powers will have a chilling effect on those who already operate outside of the current banking system,” Folwell added. “They are already frequent victims of predatory lenders and others that seek to take advantage of them because they don’t have access to traditional financial services.”

According to Paige Terryberry, fiscal policy analyst for the John Locke Foundation, the provision would also infringe on privacy.

“This action would weaponize the IRS, increase the risk of financial leaks for working Americans, and further burden small businesses and community banks with reporting requirements,” Terryberry said. “Folwell is right to oppose this trespass on Americans.”

Overall, the Democrat-based budget would allocate $80 billion to the IRS over the next 10 years to hire new staff and sharpen the agency’s auditing teeth.