“John Madden! No, you are Jerry” 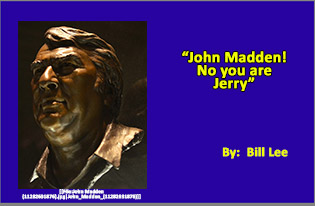 Heading back from Atlanta riding on the Amtrak train, I was getting drunk with a model, businesswoman and a car salesman.  We all sat down to get a buzz and play some cards carrying on like a bunch of teenagers.  Ok this sounds like a lead in to a joke.  But it was the beginning of the strangest nights ever.

Drinking way too much, I was wandering around train when I ran into John Madden.  A couldn’t remember his names so I kept calling him, Jerry.  I sat right down at his booth and he was gracious and cordial about it.  Reading a John Irving novel and trying to escape me by listening to his Walkman,  he could not get away from my drunken incessant ramblings.  I was telling Jerry all about how I had lost some money and then won it back.  He took off his headphones placing them on his forehead, which was hilarious.  I told him that I could hook him up with the model I was hanging out with.  He looked at me sadly and said she doesn’t want me as though thou the years had passed him by.   I believe he must have been in his late 50s.  Looking right at him I said, “That’s absurd” he politely shook his head again sadly and went back to his book.  Realizing, that moment, I had lost my audience, I excused myself.  I was walking around when I was hassled by one of the conductors who claimed my ticket was no good.  He was going to put me out.  We were in South Carolina when the conductor ordered the train to stop at the next depot which was not even a depot.  It was a freight yard in the middle of nowhere.  I was begging the conductor not to throw me off when I saw the giant couch John Madden tap the sicko conductor gently on the shoulder and said, “He is with me.”  The conductor looked at me and said this is not over but you can return back to the cabin with Mr. Madden.  John even ordered me a Jack Daniels.  We talked about what he missed about couching, which was really cool.  So I’ll share one of those things.  He said the sound of being there on the field.  The sound of their bones in full contact.  I realized I was in the presences of a battle hardened general who was made to retire from war.  The last thing I can remember saying to Mr. Madden was thank you Jerry.

A side note: he was always holding court they say and I believe that.   I wonder if he ever told the story of meeting a crazy filmmaker: back from Atlanta who called me Jerry.

I grieve at the thought of another great man with the ideals of great men, gone.  He was a great guy.