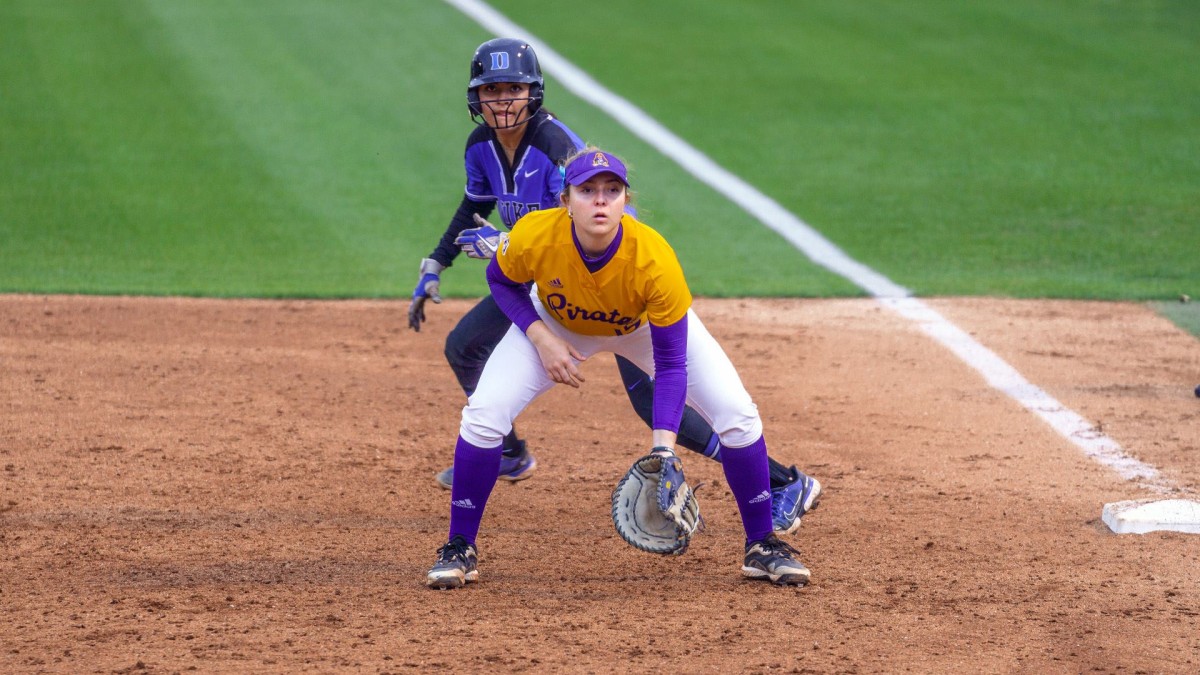 GREENVILLE, N.C.     East Carolina faced its first ranked opponent of the campaign Wednesday, falling in both ends of a doubleheader to No. 10 Duke Wednesday evening at Max R. Joyner Family Stadium. The Blue Devils swept the twinbill 6-3 and 9-1 (five innings).

The Pirates (18-15) return to action this weekend with an American Athletic Conference home series versus South Florida while Duke (25-5) hosts Boston College for a three-game set.

Reigning AAC Player of the Week Jocelyn Alonso continued to shine at the plate, going 3-for-5 with a triple and two RBI in the two contests.

The Blue Devils built and early lead and held off a late-inning ECU rally to clinch the opener.

Jala Wright (5-1) went six innings in the victory, allowing two runs and striking out five batters against three walks. Madisyn Davis (6-2) was tagged with the loss after giving up five runs on four hits in five innings of work. She walked three and struck out two.

Kristina Foreman drove in three runs to pace the Duke offense while Alonso went 1-for-2 with a run scored and RBI.

Foreman got the scoring started with a three-run home run in the top of the first as the Blue Devils would add single runs in the fourth, fifth and sixth frames to take a 6-0 lead.

East Carolina broke onto the scoreboard in the bottom of the sixth. Faith Jarvis drew a one-out walk before Alonso ripped a triple to the wall in center to plate Jarvis and Bailee Wilson grounded out to second to score Alonso. Logyn Estes began the home half of the seventh with a double and eventually scored on a Bailey Ledvina groundout to provide the final margin.

The Blue Devils used a five-run first inning to help complete the sweep.

Rachel Crabtree and Kelly Torres both notched a pair of hits and two RBI while Davidson helped herself in the circle by driving in three runs. Alonso rapped out two hits and collected an RBI to cap off her evening.

Duke jumped on top in the first with five runs via four hits and kept the pressure on with a four spot in the second. Alonso provided ECU its lone run of the game with an RBI single that scored pinch runner Gianna Edwards in the third. Neither side was able to dent the scoreboard in the final two innings.
Go Back