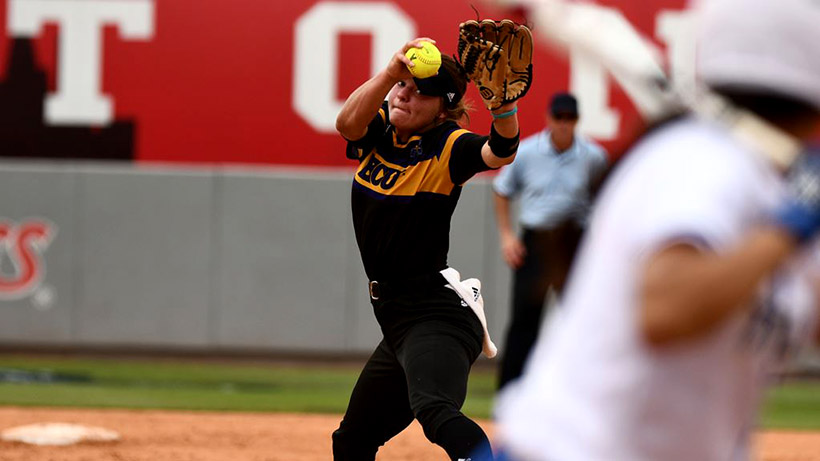 The Pirates are now 1-3 overall with one more game yet to play this weekend. ECU will go for the season series sweep of Campbell at 11:45 a.m. Sunday morning after thumping the Camels 12-0 in five innings Friday afternoon.

Game One     Senior outfielder Olivia Narron dropped a single into center field to lead off the game before stealing second and moving to third after the throw to the base sailed into the outfield. After redshirt senior utility Rachel McCollum worked a walk, she also stole second and Narron scored after the catcher's throw found center field once more. A double play ended the inning with East Carolina ahead 1-0.

A bunt single by Peyton Rivas began a big inning for Coastal Carolina as Taylor Sweigart hit a single up the middle before Stavi Augur hit a home run to left field to put the Chanticleers ahead 3-1. An inning-ending double play prevented further damage.

Augur extended the Coastal Carolina lead to 4-1 in the bottom of the second while Rivas drew a bases-loaded walk in the home half of the third to leave the Chanticleers with a four-run advantage after three complete.

Mackenzie Beyer clubbed a two-run home run in the bottom of the fifth and Augur capped the scoring with an RBI single later in the inning as the Pirates could not muster any more offense.

Augur and Rivas both led Coastal Carolina with three of the Chanticleers' 15 hits while five ECU players recorded a hit each. Additionally, Augur drove in five runs.

Junior RHP Kama Woodall (0-1) was tagged with the loss, allowing five runs on eight hits with a walk in 2.1 innings pitched. Raelee Brabham (1-0) collected her first win of the season in going the distance, scattering five hits and surrendering just one unearned run. She walked three batters and struck out five.

Game Two     Virginia Tech had the first dangerous chance of the contest in the top of the second, getting two runners on with just one out. Poepping was up to the task, however, fanning consecutive Hokie batters to terminate the half inning.

East Carolina threatened in a big way in the bottom of the second. Junior infielder Ashleigh Inae led off with a single to center before freshman outfielder Logyn Estes hit a sharp single to left. Freshman catcher Sophie Wools executed a sacrifice bunt to perfection, moving the runners into scoring position. Sophomore infielder Bailey Ledvina drew a walk to load the bases with one out, but the Pirates could not cash in as a strikeout and ground out ended the frame.

The Hokies, who entered the game scoring 31 runs in their first three outings of the season, finally broke onto the board in the top of the fifth thanks to a two-out solo home run off the bat of Kelsey Brown. Junior RHP Erin Poepping responded with an inning-ending strikeout.

Jayme Bailey put Virginia Tech further ahead with a two-out three run home run in the top of the sixth before junior infielder Chandley Garner broke up Keely Rochard's shutout with an absolute bomb of a home run that landed on top of the hitting facility behind the center field fence.

The Pirates put together one last rally in the bottom of the seventh. With two away, Ledvina doubled to left center. She was able to score when the Hokie shortstop overthrew first base on a potential game-ending ground ball. With the score at 4-2, Rochard handled a grounder back to the circle and threw to first in time for the final out.

Brown and Bailey led the Virginia Tech offense with three hits apiece and were responsible for all four the Hokies' RBI. Garner paced ECU with a home run and a run scored.

Rochard (2-0) picked up the win, tossing all seven innings and scattering five hits while allowing just one unearned run. She walked one batter and struck out eight. Poepping (1-2) went toe to toe with the returning All-Atlantic Coast Conference and all-region pitcher, going the distance as well while surrendering just three earned runs. She did not walk any Hokie hitters and piled up eight strikeouts.