Published: Wednesday, October 28th, 2020 @ 3:11 am
By: Carolina Journal   ( More Entries )
Publisher's Note: This post appears here courtesy of the Carolina Journal. The author of this post is Lindsay Marchello. 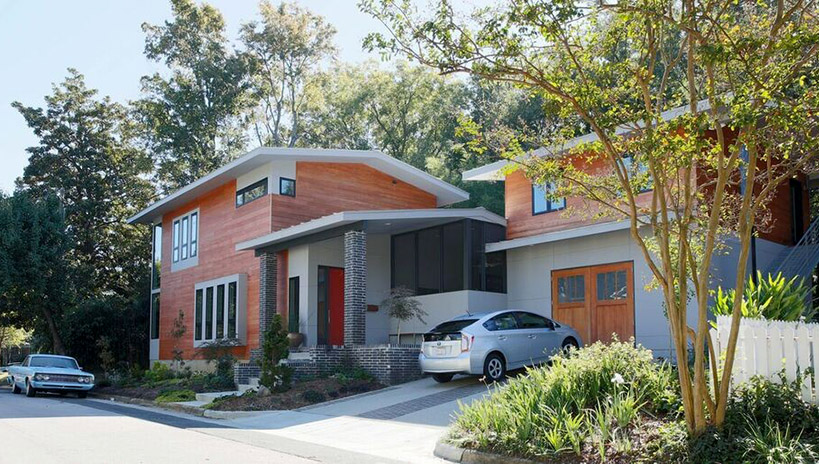 Owners of the Cherry-Gordon house, in Raleigh's historic Oakwood neighborhood, had to go to court for the right to build a modernist house even though it met city zoning rules. | Photo: NCModernist.org

The city introduced an $80-million housing bond toward that goal. The election is underway. The bond, backed by Raleigh's political and business establishment, could pass in a landslide.

But shortages drive up prices. Onerous regulations and permits slow construction. Housing is considered affordable when it takes up no more than 30% of a household's budget. In Wake County, 24% of households pay that 30% income threshold, or more. It's gotten so bad that, in December 2019, Wake needed 60,775 affordable housing units, ABC 11 reported.

"It's a simple economic formula: When there is a lack of supply and increasing demand, costs increase," Brent Woodcox, founder of YIMBY Raleigh, told Carolina Journal.

YIMBY stands for "yes, in my backyard", a pro-development movement aimed at the affordable housing crisis. Woodcox has been a longtime advocate for easing housing restrictions in Raleigh. He was a vocal critic of the city's ban against short term rentals.

Between 2014 and 2019, costs of housing in Raleigh rose nearly twice as fast as wages, Woodcox said.

"This problem cannot be solved with subsidies or through more government and higher taxes alone," Woodcox said.

Much of the $80 million is related to housing, but doesn't pay for new builds. Twenty-eight million will go toward public-private partnerships. Another $24 million will pay for gap financing, and $16 million will help buy land near planned transit routes to build affordable housing. The remaining $12 million will be split evenly between home rehabilitation and down payment assistance.

The way the city plans to use some of the money, particularly the tax credits, would require more spending in the future, Coletti said.

"How is that sustainable?" Coletti asked.

Subsidizing housing for low-income families can be a sound policy, said Emily Hamilton, director of the Urbanity Project at the Mercatus Center at George Mason University.

But there's a caveat. Subsidies, she said, need to be linked to rules that make housing generally less expensive.

Housing regulations — including zoning laws and permit requirements — limit the kinds of housing developers can build and where they can build them. Developers don't propose projects they think will run up against red tape, Hamilton said. Doing so is costly and wasteful.

"That sets a hard limit on how many new houses can be built in each locality," Hamilton said. "It prevents lower-cost types of housing being built, like apartments or even townhouses that allow for more households to share expensive land."

To its credit, the Raleigh City Council has taken steps to deregulate the housing market, Coletti said.

Council members voted July 7 to undo regulations governing "granny flats," small units on the same property with larger homes. Previously, property owners had to petition their neighbors to allow them to build such housing on their land. In a 6-1 vote, the council removed the requirement.

On the same day, the council voted to allow cottage courts and removed minimum parking requirements for downtown.

The council has made some progress, but more work is needed, Woodcox said. Step aside, government, and let the private sector build more houses, he says. Only then can cities like Raleigh ease the shortage and get costs under control.